Writer-director Edgar Wright has a new movie coming out this week, Last Night in Soho. It's not just a psychological thriller, but incorporates time travel, with the lead character living in current day London and able to journey back to the 1960s.
You can look for Thomasin McKenzie as a fashion designer who finds herself transported into the body of a night club singer (Anya Taylor-Joy). Throw Doctor Who's Matt Smith into the mix as a love interest, and that's quite the story to unfold.

Wright appears to have nailed it once again, with this hybrid genre flick on its way, premiering October 29.
It makes us wonder, why is he so good at getting it right? Let's take a gander at ten standout moments in his work and life:
1. He discovered genre-defining movies at a young age.

Wright spoke to Deadline about what movie lit his fuse, with him saying, "I'm of the age, that I was a bit spoiled in terms of my first trips to the cinema. I landed squarely in the age range, where Star Wars was my first movie. And the other big formative films — like, between the ages of three and ten — were Star Wars, Close Encounters, Raiders of the Lost Ark... I pretty much saw most of the big releases and anything genre-related."
2. He began making short films when he was 14.

He developed an interest in telling stories and making movies as a pre-teen. Wright relays his "light bulb moment" in an interview with The Guardian, that in 1988, he had watched a TV series called The Incredibly Strange Film Show, which featured Sam Raimi and his movie The Evil Dead, which Raimi began working on at 18. This is when Wright knew he was hooked and wanted to be a director. It gave Wright the inclination that he could start working on films at a young age.
3. His first feature film was an ode to Clint Eastwood.

While his first feature film, 1995's A Fistful of Fingers, was never released, Wright considers it a huge stepping stone. The movie is inspired by the Western genre, revolving around a cowboy who searches for the man who killed his horse. He did an interview with Empire in 2015, talking about all of the time and heart that went into it, saying, "I'm hoping to finally release Fistful Of Fingers next year, with a commentary and everything. It's funny, for a long time I've been ashamed of this film. If I've done an interview and people say, 'Your debut, Shaun Of The Dead...', I never correct them. I still can't watch it: it's absolutely cringe-worthy, like reading a diary you wrote when you were 19. But slowly I've become weirdly proud of it. I now look back at it with a lot of fondness, and the nicest thing is that I got to make a feature film with my friends from school. We've remained friends; they were all inspirations for the characters in The World's End. So it all worked out okay."
4. He works with buddies.

Wright started off his career collaborating with schoolmates, as he discusses above. And continued to do so as he moved forward in his career, working with Simon Pegg and Nick Frost on the TV series Spaced (1999-2001). And, continuing that collaboration, creating the one and only Three Flavours Cornetto Trilogy, made-up of Shaun of the Dead (2004), Hot Fuzz (2007) and The World's End (2013), starring both Pegg and Frost.
5. He didn't attend film school, and he's okay with it.

Wright was set to direct the Marvel movie Ant-Man, but because of creative differences, he left the project. But, he didn't spend a lot of time mulling over those differences, instead putting his time and energy into 2017's Baby Driver. Turning his attention to a new project seems to have worked out, with Wright having creative license, being able to make the kind of movie he'd like to make and it... getting praise. Like with The Guardian writing, "Edgar Wright is back in the fast lane with his most thrillingly cinematic romp." That makes us want to go back and re-watch.
7. He makes what he would like to see on-screen.

In an interview with Dolby, Wright talks about his filmmaking approach. It's pretty straightforward and clear-cut, with him saying, "Personally, I make movies that I would like to see. So, what I write and what I make, is a film I would like to see if I were an audience member." It makes us think of purchasing a gift for someone else, keeping in mind, "What would I like to receive?"
8. He's adaptable. 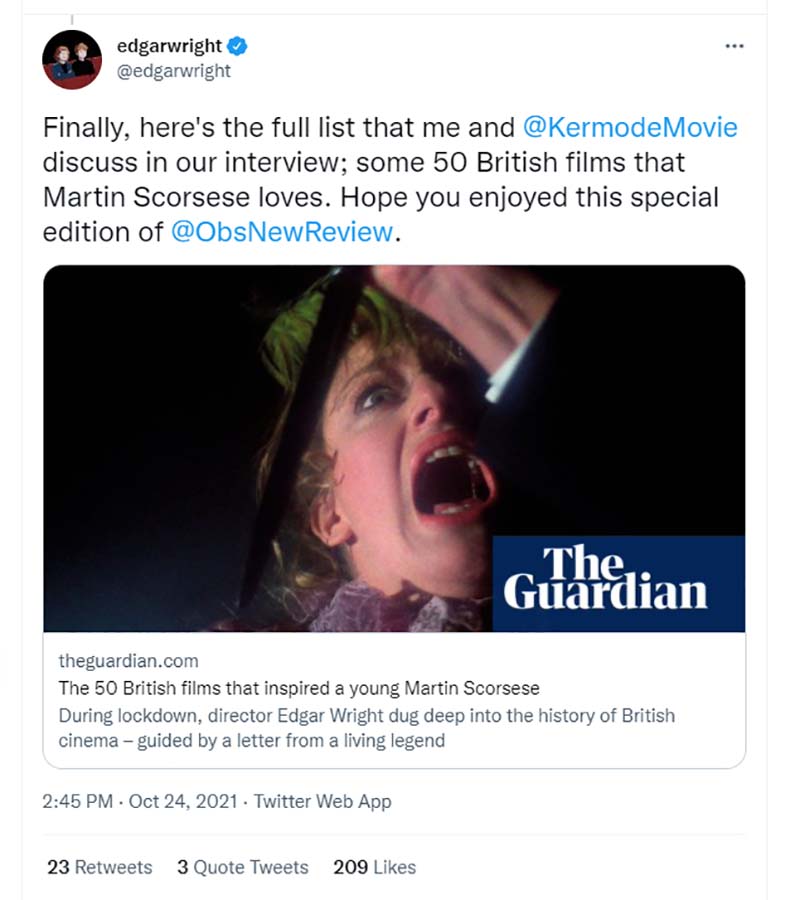 Like everyone else, life was put on hold for Wright during quarantine. But, not quite like everyone else, he reached out to friend and filmmaker Martin Scorsese for advice on movies to watch while in lockdown, specifically British movies, reports The Guardian. Scorsese called him back, leaving a list of 50 movies on his voicemail. That must have been a long message.
9. He doesn't give up.

Wright's latest film, Last Night in Soho, hit some hurdles because of quarantine. The release was pushed back a couple of times, but even so, he stuck to it and held out for a theatrical release, hoping to provide a true movie experience for viewers, aka, "In the dark, on the screen, with an audience."
10. He's inviting. 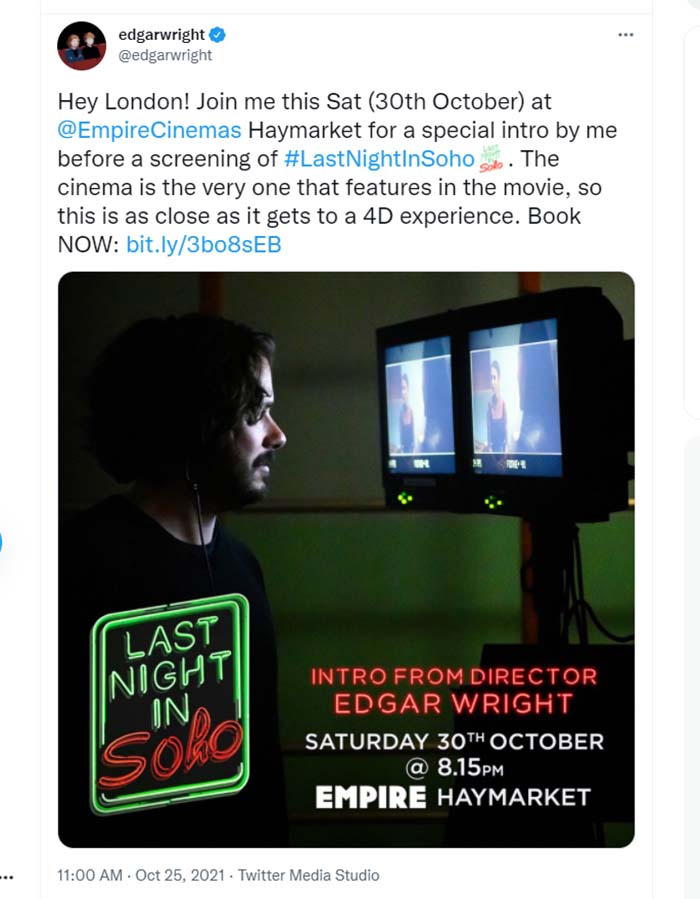 And, finally, Wright has shared on Twitter that he will be attending a screening of Last Night in Soho, happening this coming Saturday, October 30. And, everyone is invited. Well, everyone close enough to attend. Still... it's a very nice gesture.
Does this make you want to go out and make a movie now?