British pubs are a centuries-old institution which Restoration era-diarist Samuel Pepys famously described as the "heart" of the nation. At present, they're closed due to Coronavirus social distancing restrictions, but from April 12 they'll be able to serve punters in outdoor seating areas — a definite step in the right direction.

"Pub" is actually short for "public house," and here are 10 other things you might not know about these quintessentially British drinking dens.

1. According to British pub-promoting organization CAMRA (Campaign for Real Ale), this is the four-point definition of a pub.

(2) serve at least one draught beer or cider

(3) allow drinking without requiring food to be consumed, and have at least one indoor area not laid out for meals; and

(4) allow customers to buy drinks at a bar

So, if an establishment is table-service only, it's just not a pub.

2. It's impossible to pinpoint the oldest pub in the U.K., because historical records aren't definitive.

But, the Old Ferry Boat in St Ives, Cambridgeshire is definitely a strong contender. It's reputedly been serving pints since 560 AD.

3. The U.K.'s most famous publican is probably Sir Ian McKellen.

The Lord of the Rings actor co-owns The Grapes in Limehouse, a riverside pub in east London that dates back to 1583. He doesn't pull pints there, but has been known to host the pub quiz. 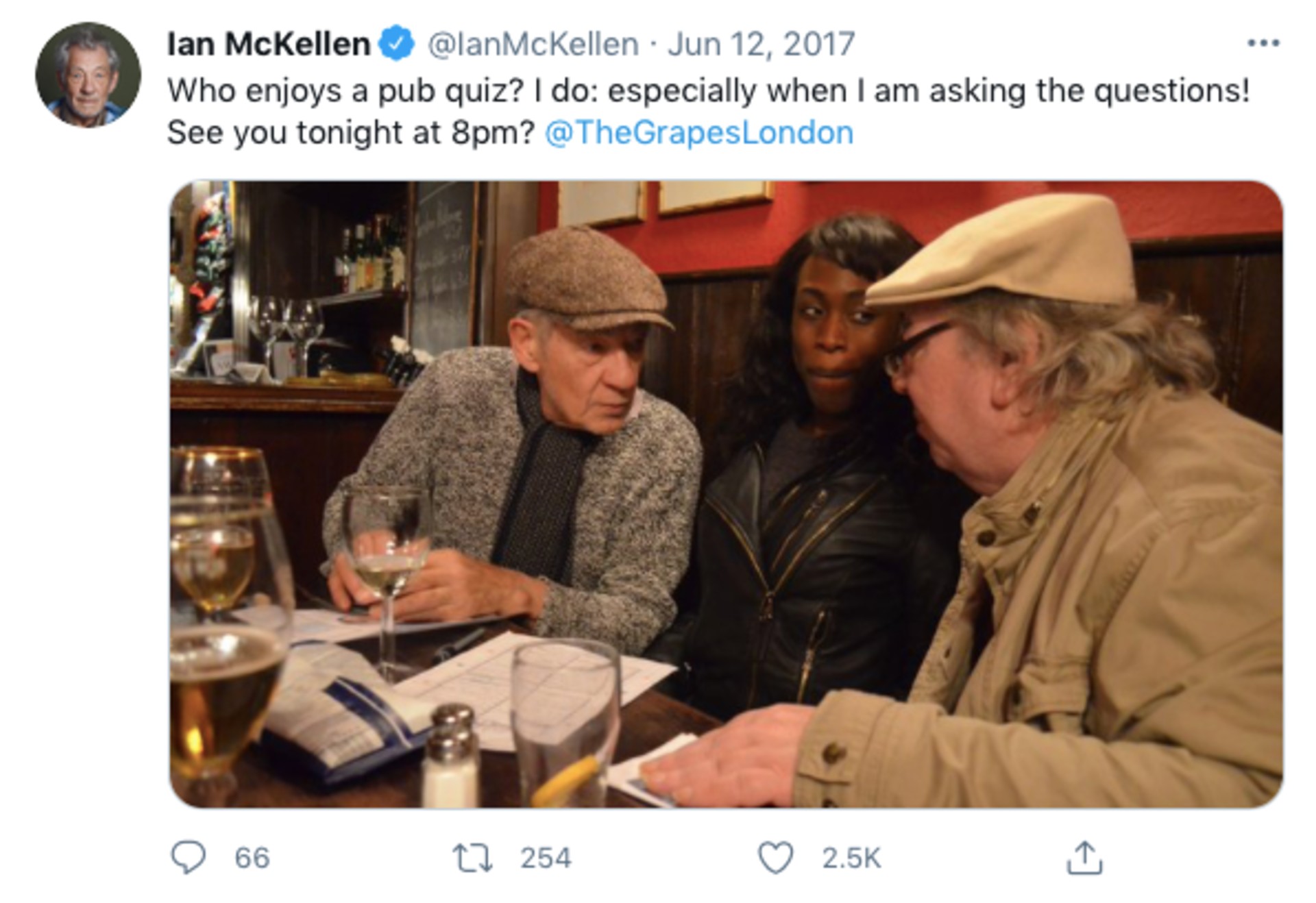 4. Pub quizzes are hugely popular, but are actually a relatively recent phenomenon: they only started in the 1970s.

According to the Daily Telegraph, around half of British pubs host a weekly quiz in normal times. Teams generally compete for a cash prize — £50 ($70) is fairly typical in London — with a round of drinks for the runners-up.

With pubs closed due to the pandemic, many quizzes have been taking place virtually. You can have a crack at some typical pub quiz questions below.

The Royal Oak, The Crown, The White Hart, and The Plough make up the rest of the top five, according to Culture Trip.

Of course, some pub names are more unusual than others. A case in point: The Case Is Altered, a charming-looking establishment in north London.

6. Britain's remotest pub is The Old Forge in the Scottish Highlands.

According to its website, it's not accessible by road — only via a 28km hike or an 11km sea crossing. Fortunately, the food it serves is meant to be very good.

7. Generally-speaking, anyone can enter a British pub, but you'll need to be at least 18 to order an alcoholic drink.

If you don't look comfortably over the age of 18, expect to be asked for I.D. — as the gang from teen sitcom The Inbetweeners find out in this clip.

Toward the end of the evening, the publican will ring a bell behind the bar to signify "last orders" — basically, the final time you can go up to buy a drink. Last orders will often happen at around 11pm, and once the publican rings the bell for a second time, it's time to finish your drink and head on home.

9. The U.K.'s oldest gay pub could be the Royal Vauxhall Tavern in south London.

It dates back to around 1860 and has welcomed some very famous faces over the years. According to actress Cleo Rocos, Queen singer Freddie Mercury managed to sneak Princess Diana into the pub one night in the '80s by disguising her as a man. Dame Helen Mirren has also popped into the RVT (as it's commonly known) to catch a drag show, as she recalled on The Graham Norton Show. 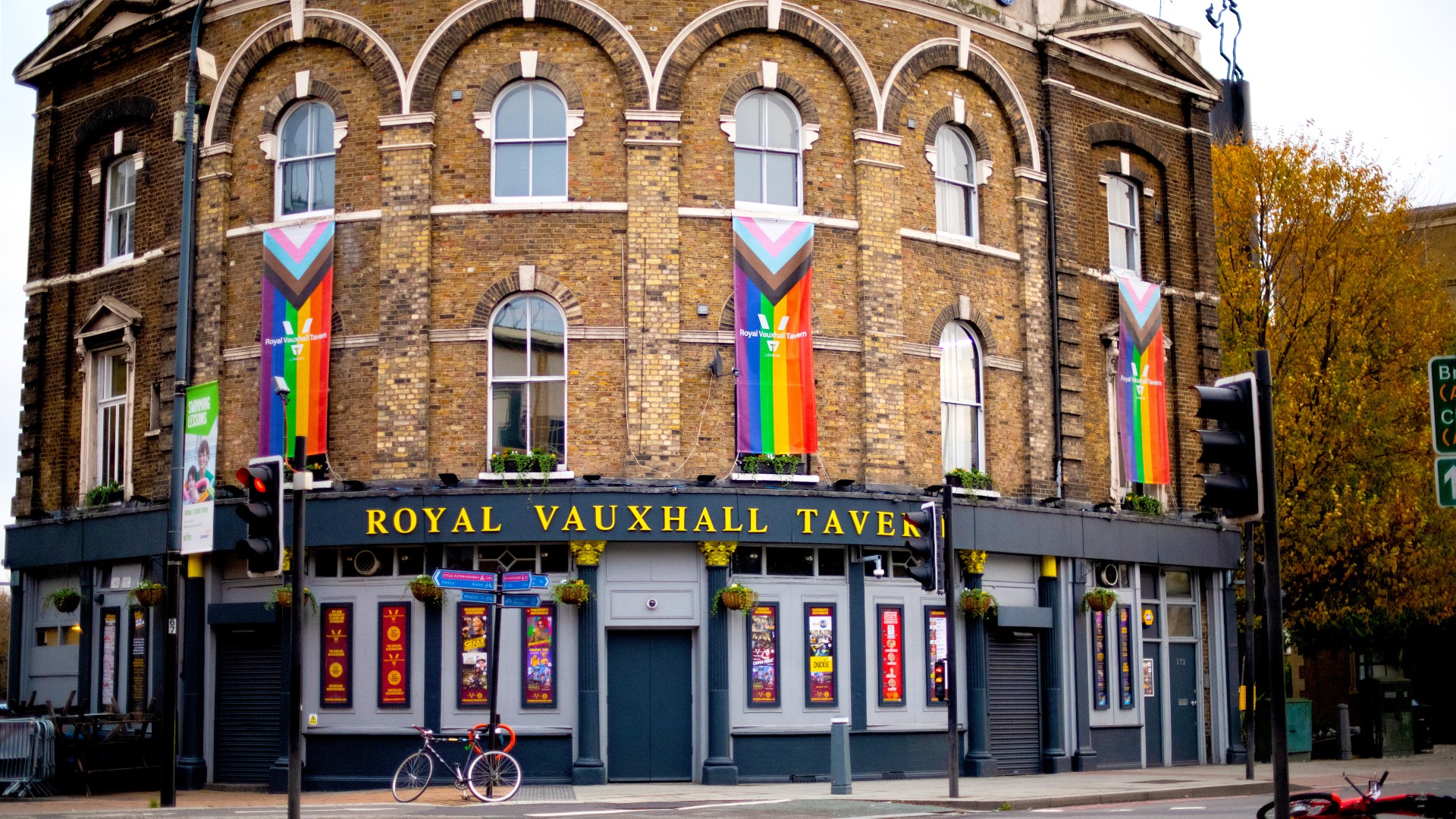 10. The number of pubs in the U.K. has been in decline for some time.

According to the Office for National Statistics (ONS), the number of pubs in the U.K. dropped from 51,120 in 2007 to 39,130 in 2019. There are numerous reasons for this, including changing drinking habits, competition from supermarkets selling cheap alcohol, and city-center pub buildings being developed into upscale flats.

Happily, though, the number of pubs actually increased slightly in 2019, by 315, which suggests the downward trend could be leveling off. Let's hope they can make it through the pandemic, too.

Do you have a favorite British pub?