(Photo: Getty Images)
Olivia Colman has a new movie coming out, starring in The Lost Daughter. A first look trailer was just released this week, and we see Colman’s character on vacation.
While a beach holiday may promise some R&R, Leda (Colman) seems very distraught:
We can look for The Lost Daughter to premiere in December.
In the meantime, let’s backtrack and enjoy some of Colman’s standout moments: 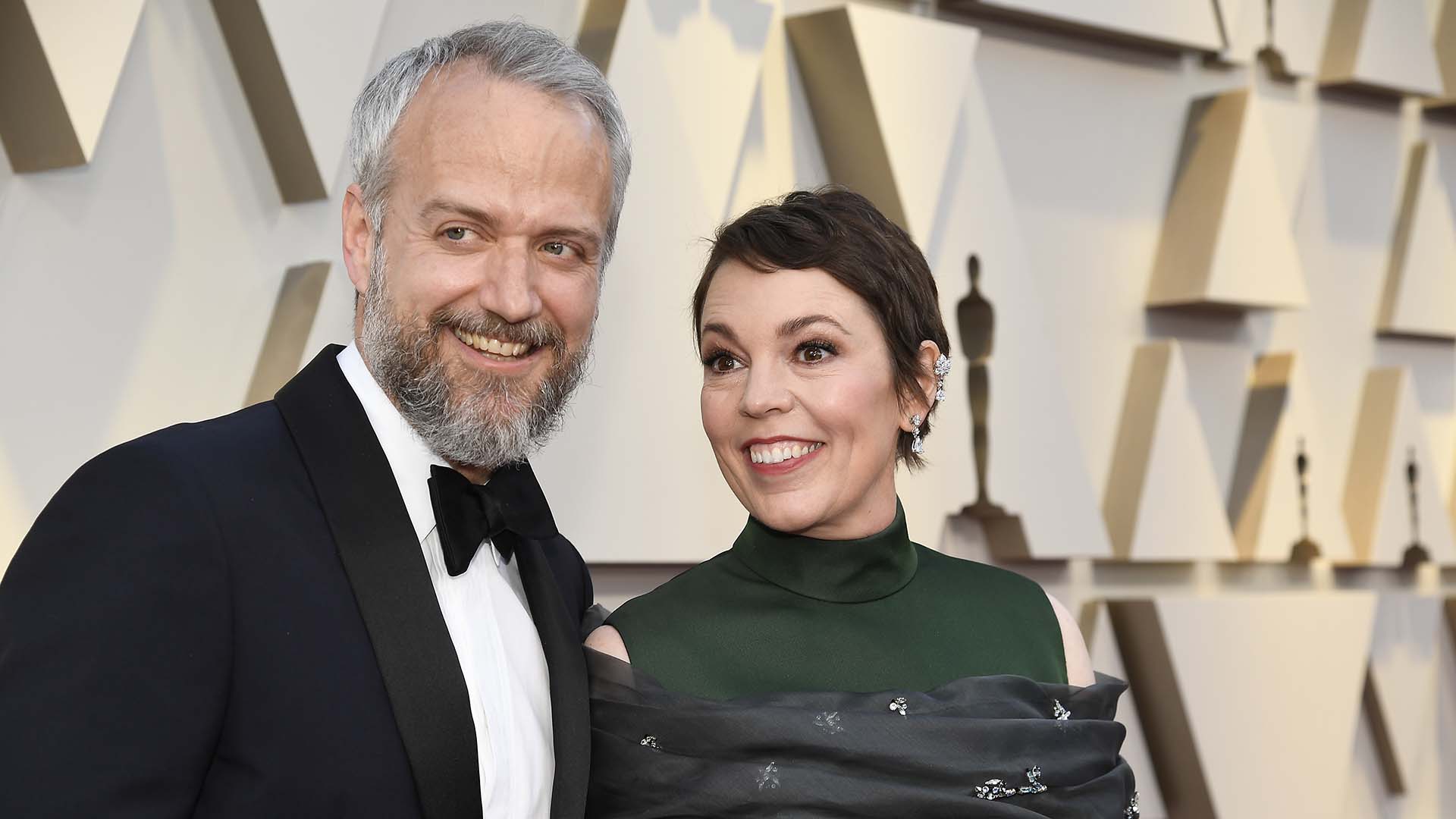 In an interview with the Big Issue, Colman talks about meeting her husband. And it’s a doozy of a story. She knew on first meeting that he was the one for her, saying, “I immediately thought, that’s the person I’m going to marry. I absolutely threw myself in, I didn’t play it cool. And at first he just could not see it. He can be very slow on the uptake.” It clicked three months later, with Colman declaring her love for him.
3. She’s also very reasonable.
Colman joined The Crown in 2019, starring as Queen Elizabeth II. She spoke to The Financial Times about the series and the making of it, saying, “I don’t really know these people. We’re making a drama out of reality, some of the facts we know, and the rest of it we’re making up.” She seems to be respectful of storytelling, especially when dealing with historical events.
4. She gives praise to her colleagues.
Just last year, Colman starred opposite Anthony Hopkins in the family drama The Father. While the two had never met or worked together, Colman embraced the opportunity. Colman talked to ScreenDaily about going into the project, saying, “I found him a joy, on set and off. Weirdly, there was a sort of shorthand because I had grown up seeing his face and listening to his voice and watching his films.”
5. She was utterly terrifying in Doctor Who. 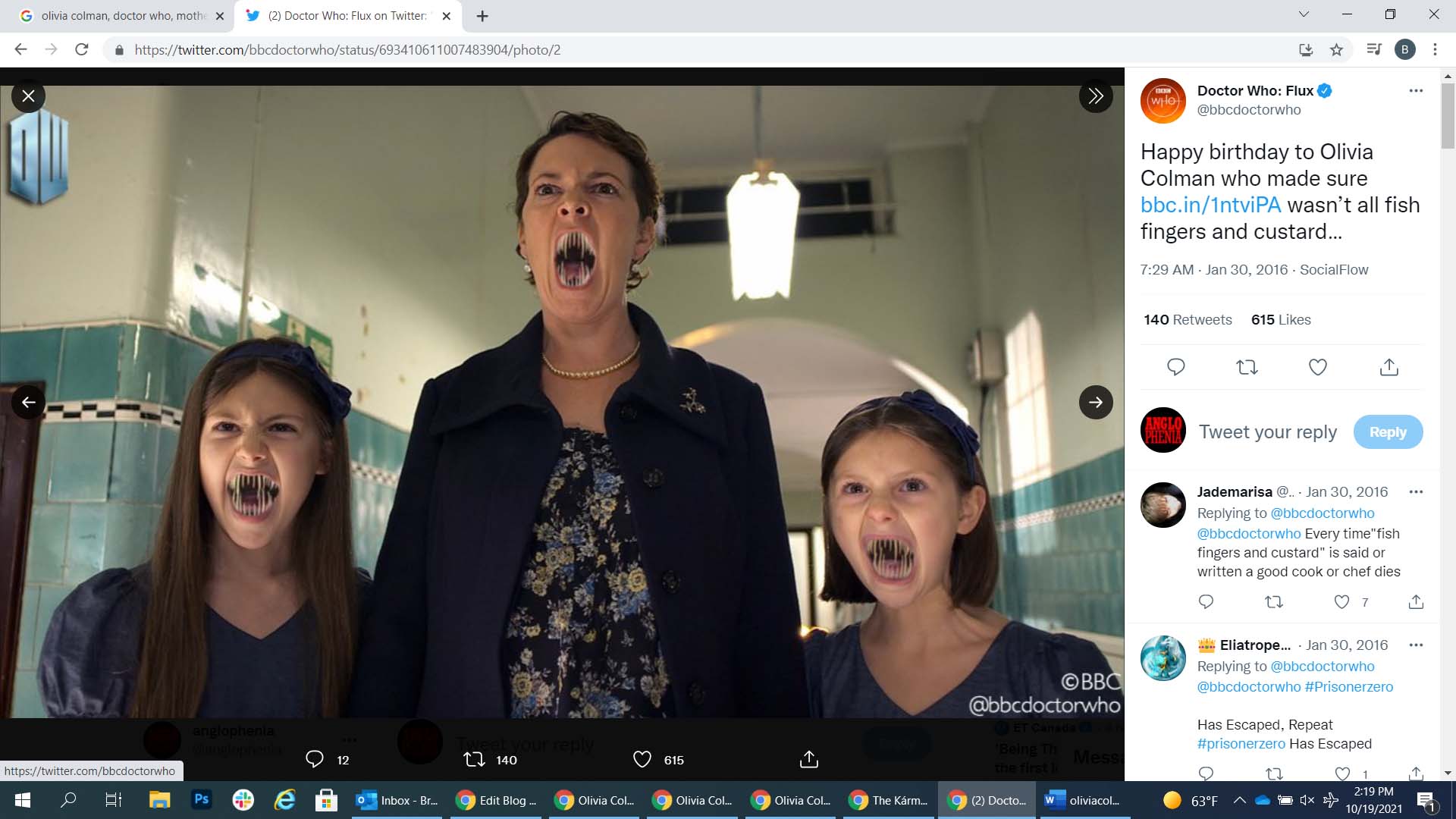 In 2010, we saw Colman in the Doctor Who episode “The Eleventh Hour” as Mother. Her character is in a coma and is then taken over by Patient Zero. As you can see in the above picture, Mother and her two children are not quite themselves. The out-of-this-world teeth do help with the terrifying factor, but Colman was the one to deliver. DW showrunner at the time, Steven Moffat, says of Colman’s appearance, “Olivia Colman, just a heartbeat before she was stratospheric,” according to the RadioTimes.
6. She has good taste in co-stars.
Speaking of Doctor Who, Colman teamed up with fellow DW alum David Tennant for the crime drama Broadchurch. They both play detectives, investigating a missing persons case. Their on-screen chemistry was so good, the first season had 9 million viewers tuning in each week. In an interview with The Guardian, Colman talks about the pressure that comes with success, saying, “The level of interest was actually quite intimidating. On the second one, there were so many long lenses around that we had to film scenes that gave anything away indoors. Maybe I’m just naive but I don’t see why people want to ruin it for viewers.”
7. She wears her feelings on her sleeve.
In this case, she wears her feelings on her sleeveless gown. In 2019, Colman won the Best Actress Oscar for her performance in The Favourite as Queen Anne. When her named was announced at the Academy Awards ceremony, her face turned upside down, with her holding back tears. While she may look upset, we have a feeling that those were happy tears. And, watching the above clip gives us the feels. Her emotion can be felt through the screen. When she got to the stage, she was all smiles, then wiped her nose as she was a little sniffly, finally announcing, “This is all genuinely very stressful.”
8. She can laugh at herself.
Colman has mastered drama, but she got her start in comedy. So, we know she can play funny. But, she’s also funny in real life. Appearing on the The Graham Norton Show she relays a story from the set of 2011’s The Iron Lady. She was having a giggle with co-stars Meryl Streep and Jim Broadbent, with Streep, saying, “Let’s take a photo with our funny English teeth.” Streep and Broadbent wore fake teeth for their roles, but Colman’s were… real.  Side note: we think her smile is bee-a-u-ti-ful.
9. She takes fame with a grain of salt.
Her more recent roles, in The Crown and The Favourite, have made Colman internationally known. She finds stardom a little hard to handle, saying in an interview with The New York Times, “I hate the loss of anonymity. No one teaches you how to deal with that. I now just tend to stay home because it’s so weird not to be on an equal footing with people. They know your face, and you don’t know them. It’s not that people aren’t lovely, but it’s harder to deal with than you imagine.”
10. She delves out good advice. Colman isn’t just amazing at her craft, she’s happy to share what she’s learned. When meeting with a group of drama students, she said, “Learn your lines, try and know everyone’s name, be on time… There’s a million people who would have your job in a second and more… who are better than you. Take your job seriously and not yourself,” reports The Guardian. She went on to say, "If I now decided, ‘Oh, I will only do feature films,’ I might not work again." She takes her own advice, starring in the 2014 short film above.
Do you find yourself loving Olivia Colman even more now?

Emma Thompson Talks About Why Her Miss Trunchbull Is Different

Where to Look for New 'Shetland' Star Ashley Jensen: From 'Extras' to 'After Life'

Benedict Cumberbatch Gives Thanks to ‘Sherlock’