Posted by BBC America Editors | February 4, 2013
In Episode 3 of "Ripper Street," "The King Came Calling," Captain Jackson wasn't the only one who experienced the world of Victorian vice. Inspector Reid and his fellow officers tap into the scene when one of their investigations lead them to a transvestite brothel. Sex and sexuality was as prevalent in the 19th century as it always has been, but possibly not so well-defined and controlled. "Repression" is one of the most common words associated with the Victorian era, and the 1890s in particular, when "Ripper Street," takes place, was a "repressed" time. The era, named after the long reigning Queen Victoria who reigned from 1837-1901, is known, however, for its vices. Many social hobbies that are highly contested and illegal today was done in abundance, and in many cases, done legally. 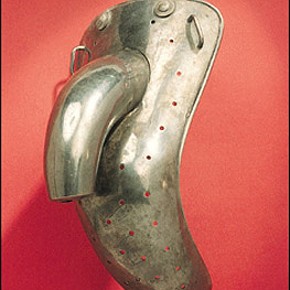 Male anti-masturbation device, 1880-1920 (Victoria & Albert Museum) 2. Cross-Dressing and Gender-Bending You may be surprised to know that cross-dressing was not unusual during the Victorian period. Men even wore corsets to get the 'fashionable dandy' look, and women were known to dress as men, sometimes even to gain employment, not unlike the famous novel "Albert Nobbs," which was recently made in to a film starring Glenn Close as a cross-dressing female employed as a butler. There were no labels for homosexuality as we known it today, and there was quite an abundance of homo-eroticism and gender bending going on, not only behind closed doors, but out in the open. It wasn't until the 1900s when the act of homosexuality was found 'publicly indecent.' Queen Victoria herself kept a law from passing in 1885 that attempted to criminalize 'lesbianism' and 'Sapphic' practice (a Greek term which would later describe homosexual love between women). To learn more about cross-dressing during the Victorian era, check out this detailed Time Out article.

(Cross-dressing, Victorian Style) 3. Prostitution Moral uproar concerning prostitution was at its peak in the 1850s-1860s, mainly because it highlighted a sort of female sexual freedom. These women, though still indirectly controlled by men, had economic autonomy. In cases such as Long Susan's brothel in 'Ripper Street,' they also had more protection than the average non-married female in Victorian society. Prostitution was, however, legal, at this time in Europe, making it an honest profession for a woman who had no other means of supporting herself, not to mention a roof over her head.

(Victorian Era Through the Eyes of Charles Dickens) 4. Flagellation Some say, thanks to the repressive nature of Victorian culture, that pornography blossomed in the shadows of repression. High crime and corruption was now out in the open, thanks to newspapers, and the "moral" members of society fought against "impure and licentious books, prints, and other publications." (The Dictionary of Victorian London) "French postcards," or "smutty" pictures, as Captain Jackson refers to them, were becoming more heavily circulated. But one erotic theme, 'flagellation,' (whipping) stood out as the most popular. There are many theories as to why, but the most plausible that historians have come up with are that Victorian men experienced 'flogging' as school boys in public, and for some this became a regular method of arousal. Another popular theory is that the men of this age were under pressure to be constantly in control of their household, their lives, and their work that they secretly wanted to be controlled in some fashion. Many of the brothels at the time were 'flagellation brothels,' underlying its popularity. 5. Substance Abuse Performance and mood enhancing substances were incredibly common in the late 19th Century thanks to industrialism and trade, as well as the rise of the middle class. Drugs like cocaine and marijuana were not only legal but widely distributed. Opium and heroin are probably the most common affiliated with the period, which was used mainly by the wealthy. Laudanum, which was a mix of alcohol and opium derivatives, was a common item in medical kits, and used most popularly among upper class women. It is widely believed that women would use marijuana to relieve menstrual cramps, and among the wealthier crowd, chloroform inhalers became popular, similar to nitrous oxide (from anesthesia). Check out this Current TV blog for more.

(From a Victorian medicine cabinet)

Find out how ‘The Watch’ creators and stars brought Terry Pratchett’s beloved creations from page to screen. All-new episodes premiere on Sundays at 8PM on BBC America.

Explore the city of Ankh-Morpork and meet the allies fighting to save it. All-new episodes of ‘The Watch’ premiere on Sundays at 8PM on BBC America.

Ridley Scott's Napoleon Bonaparte Biopic 'Kitbag' is Getting Some Movement