The Winners and Losers at Last Night's 2018 Emmys

Claire Foy took home an Emmy last night (September 17) for her portrayal of Queen Elizabeth in The Crown, but her on-screen husband Matt Smith walked away empty-handed, despite his performance receiving equally glowing reviews.

Claire used her acceptance speech to pay tribute to her co-star, saying, "I dedicate this to the next cast, the next generation," before appearing to choke back tears and adding, "and I also dedicate this to Matt Smith."

The touching moment summed up a night of surprises, as some unexpected winners came to the fore, and others tipped for the top failed to live up to expectations. Game of Thrones and The Marvelous Mrs. Maisel were the big winners of the night, each taking their tally up to nine awards after last week's Creative Arts awards, with Saturday Night Live, The Assassination of Gianni Versace and RuPaul's Drag Race also getting a look in.

The Handmaid's Tale didn't, however, despite receiving eight nominations, and sweeping the board at last year's awards.

Claire's award for Best Lead Actress in a Drama also meant Elisabeth Moss and Keri Russell missed out, though the latter's on and off-screen husband, Matthew Rhys, did win Best Lead Actor in a Drama for his performance in The Americans.

But Benedict Cumberbatch, who was hotly tipped to win Best Lead Actor in a Limited Series for his performance in Patrick Melrose, lost out to Darren Criss who took the award for his role as Andrew Cunanan in The Assassination of Gianni Versace. But if Benedict was disappointed he didn't show it: when director Glen Weiss proposed on stage to his wife later on in the ceremony, Benedict's reaction was sheer delight (though his happy clapping could also could have had something to do with the recent news that he and wife Sophie Hunter are expecting baby number three):

The Patrick Melrose star caught up later with old pal Matt Smith, who could commiserate after losing out to Peter Dinklage for Best Supporting Actor in a Drama Series. Here they are much later on, hobnobbing at an after party: 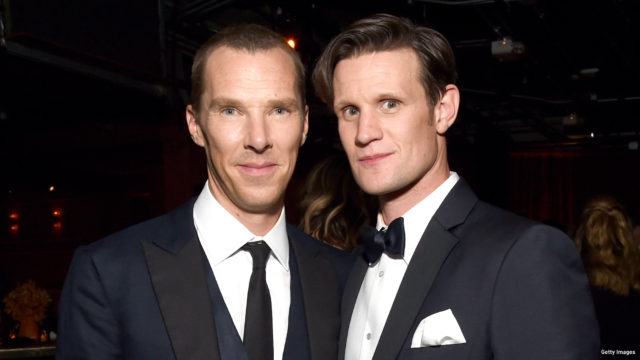 Chin up, lads. We still think you're marvelous.

The Hollywood Reporter has a full list of the winners.

Did your favorites win?