(Photo: Getty Images)
We saw David Tennant and Michael Sheen as the demon Crowley and angel Aziraphale in the first season of Good Omens. The series is based on an adaptation of Neil Gaiman and the late Terry Pratchett’s fantasy novel.
Viewers were clamoring for more, but it wasn’t clear if it’d be happening, as the first series covered the entire book. But, Amazon Prime delivered, with a second season greenlit. Plus, Gaiman stepped up to the plate, providing new material.
For that matter, both Tennant and Sheen also returned to reprise their roles.
Director Douglas Mackinnon has turned to Twitter to share some news on production: 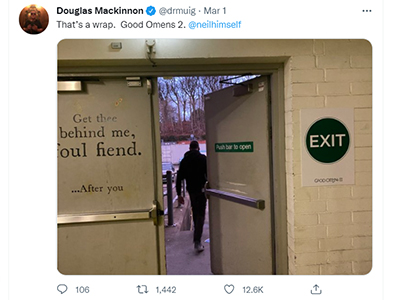 According to ComingSoon.net, the team had been filming in Scotland for four months and are now finished. Well, maybe not finished-finished, because fans are asking about a third season.
A viewer posted on Twitter, writing, “Okay okay now we need season 3,” and Gaiman responded, simply saying, “I agree.” 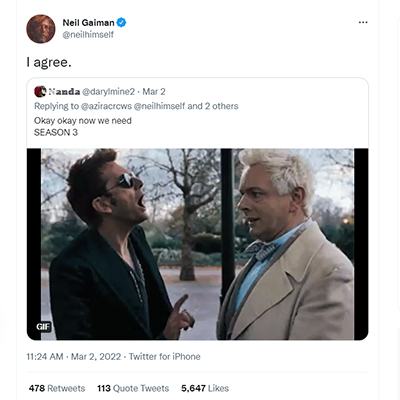 If you need some catching up, here's a peek at the trailer for the first season, which revolves around the two rivals joining forces:

Back in the day, Gaiman was hesitant to have his work adapted for screen, but it appears he’s switched gears. And, now he’s in go mode. We can also look for Gaiman’s The Sandman as a TV series, set to premiere over on Netflix in April.
Are you keen to see Neil Gaiman's work heading to the screen?