(Photo: BBC)
A thousand or so years traveling around in time and space will definitely leave you with a few boxfuls of trinkets, doodads and whatnots, and the TARDIS is not exactly short of storage space.
Here are just a few of the interesting things we have seen the Doctor use or wear or carry, before slinging them to the back of the dress-up box for future use.
1. A monocle 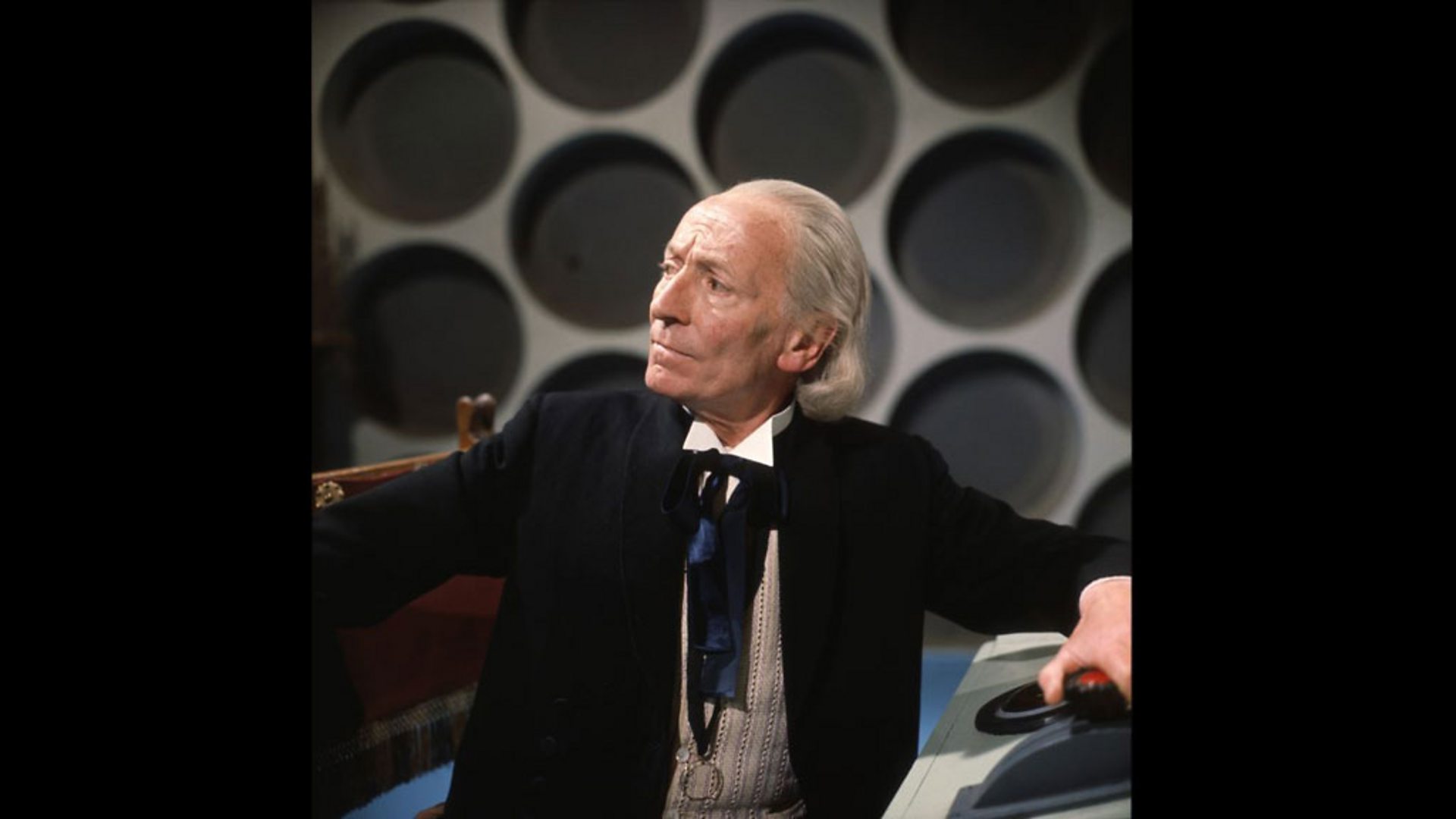 (Photo: BBC)
The early attempts to present the Doctor as a particularly Edwardian/Victorian type of interstellar gentleman detective are riddled with signifiers of an older world. The First Doctor dressed like he was 40 years out of time and was in the habit of wearing a monocle. The Second Doctor dressed like a cosmic hobo who found his clothes on his travels – which explains why they didn’t quite fit properly – and of course, he’d have lost that monocle on day one.
2. A pipe

Now here’s a sign of the times. In the first Doctor Who story shown on TV in 1963, the First Doctor is seen attempting to light his Sherlock Holmes-style curly pipe with a match. He smokes a pipe! And at the time, that was considered an unremarkable thing to happen in a children’s TV show. It’s a significant plot point in the first ever Doctor Who story, which rests on the fact that he drops his matches and can’t make fire for cavemen. By contrast, when the Eleventh Doctor dressed up as Sherlock Holmes in “The Snowmen,” he does not put anything in his pipe or smoke it.
3. A magical blue signet ring
The First Doctor also wore a blue signet ring on the middle finger of his right hand, which he occasionally used to unlock the door of the TARDIS. He could also use it to help him hypnotize people if need be. It was too big for the Second Doctor’s fingers, sadly. It was not the only ring he’s worn down the years – remember the wedding ring that fell from Twelve’s hand when he regenerated? – although the others were imbued with fewer magical qualities.
4. A stripy recorder 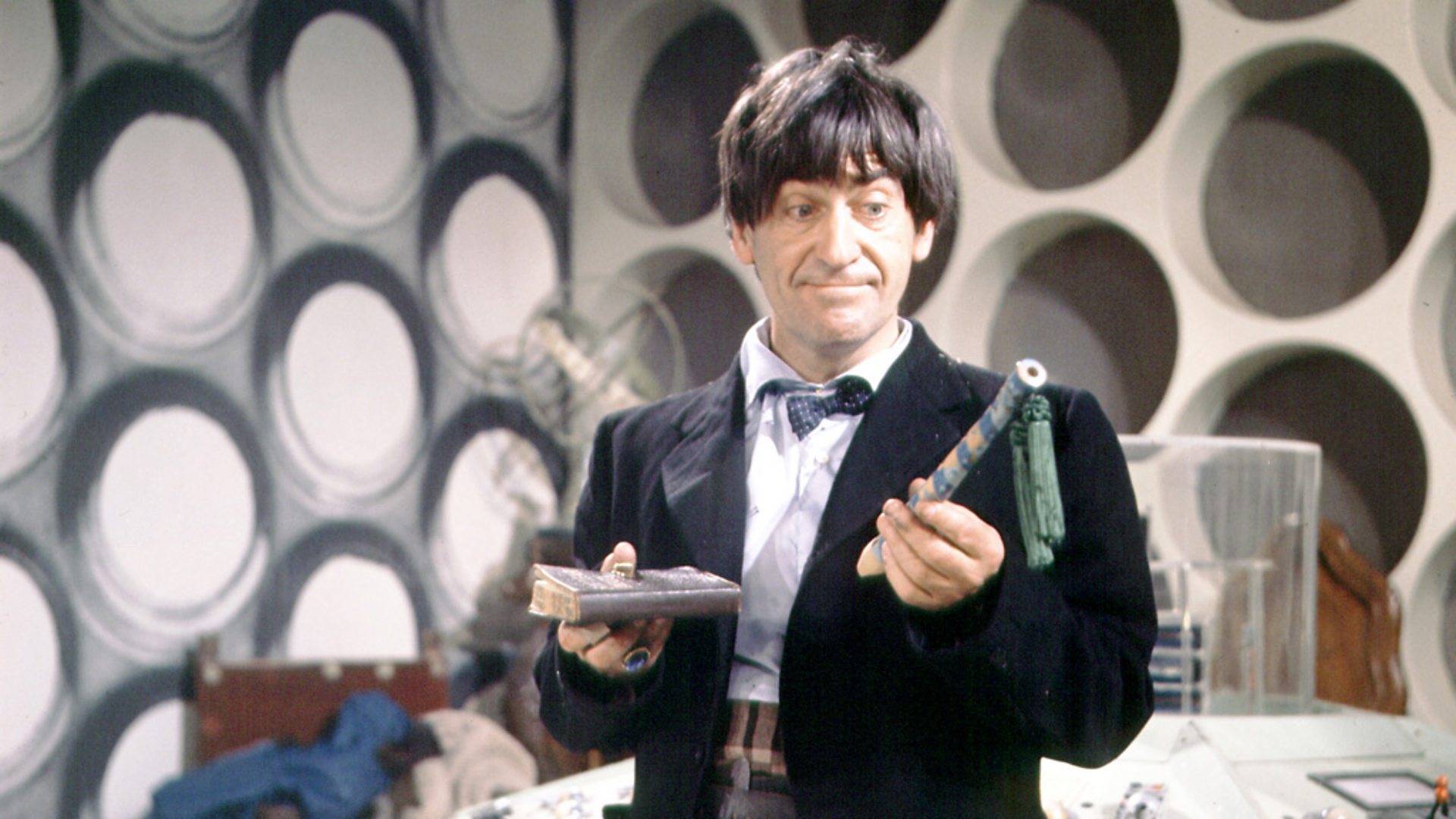 (Photo: BBC)
The Second Doctor shares something with the Twelfth, namely a desire to play a musical instrument in order to help him think. Weighing up the options, it’s worth noting that a recorder – even a stripy recorder with a tassel hanging off the end – is a lot more portable than Twelve’s electric guitar. But on the other hand, it’s a lot more shrill and the music can be deeply irritating to others.
5. A TARDIS homing watch
In “Spearhead from Space,” the first of the Third Doctor’s adventures, he locates the Brigadier and Liz Shaw, who have the TARDIS, thanks to his wristwatch, which beeps. He claims it “hones in on the TARDIS,” and that may be true, but it’s never been seen since. In the real world, this may be attributable to the fact that the watch actually belonged to Jon Pertwee, the Third Doctor, and it went with him when the Doctor regenerated.
6. A yellow yo-yo

No such technological advancements were claimed on behalf of the Fourth Doctor's yellow yo-yo, although his companion Leela did once think he’d given it to her as part of driving the TARDIS. He may have used it to test the gravity on arrival on a spaceship, but the rest of the time he played with it strictly for fun.
When it reappeared in the pocket of the Twelfth Doctor in “Kill the Moon” (after a brief appearance in the Sixth Doctor’s multi-colored coat), he once again used it to test gravitational irregularities. And then shortly afterwards attempted to impress a Viking village enough to convince them that he was Odin (“The Girl Who Lived”).
7. A football rattle

Some cultures call it a ratchet, grogger, raganella or noisemaker, but to 1970s British soccer fans, it was called a football rattle and the Fourth Doctor used one in 15th century San Martino to scare away some horses (“The Masque of Mandragora”). The Tenth Doctor used one for a bit of crowd control when Sarah Jane Smith’s child detectives were panicking after her disappearance, in the Sarah Jane Adventures story “The Wedding of Sarah Jane Smith.”
8. A stick of celery 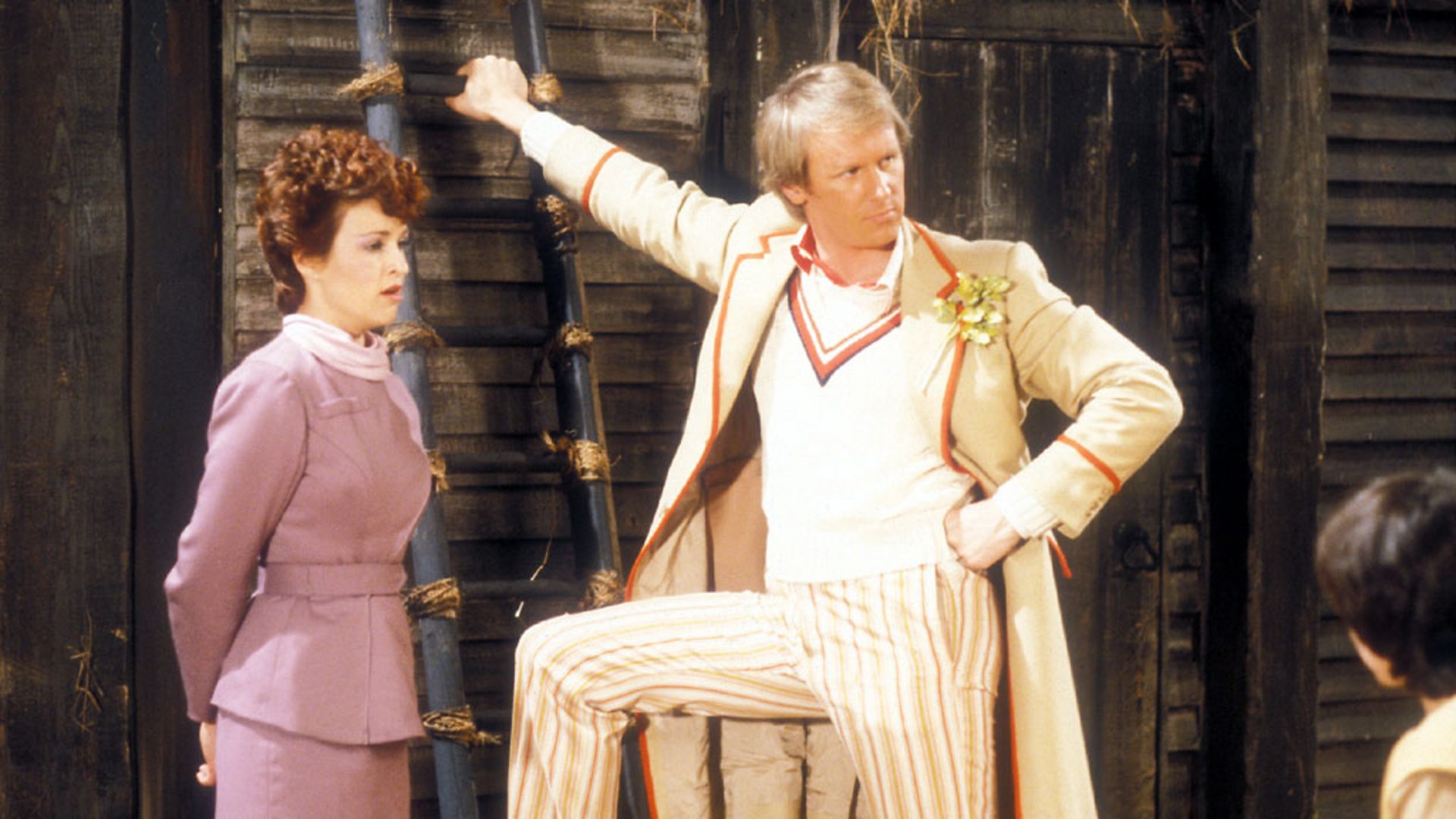 (Photo: BBC)
The best thing about the stick of celery the Fifth Doctor wore on his lapel is that it defied logical explanation. Oh sure, there were stories in which the celery was given a use, but none of them made anyone ever slap their foreheads and exclaim, “Of course! Now you’ve said that, I’m off to get my own chest salad.” And it can’t have been THAT useful, or the Doctor would still be carrying a sprig to this day.
That said, when Eleven was decontaminated by the Silurian doctor Malohkeh in “Cold Blood” – a process that actively harmed him, until he managed to beg the process to stop – he immediately quipped, "That's much better, thanks. Not got any celery, have you?"
9. An umbrella

(Photo: BBC)
The lost property department of every bus and railway company will undoubtedly contain any number of umbrellas. And the TARDIS does too. There’s the Sixth Doctor’s multi-colored affair, which seemingly only made an appearance in the show because he happened to need an umbrella during an outdoor photoshoot and it made its way into all the publicity pics. His next incarnation would take one of two umbrellas everywhere, the black one with a whangee handle, and the red one with the question mark handle. More recently, it’s Missy that has taken up the umbrella habit, with the last two Doctors preferring to wear hooded garments for a rainy day instead.
10. Opera glasses
The First Doctor used to carry a pair of opera glasses around with him, which he used as binoculars, particularly to get a closer look at the Dalek City from afar when he landed on Skaro in “The Daleks.” The Ninth Doctor must’ve done some serious rummaging in the TARDIS, because he also had some (slightly technologically enhanced) opera glasses to help him spy on wartime soldiers in “The Empty Child.”
11. A fake pigeon 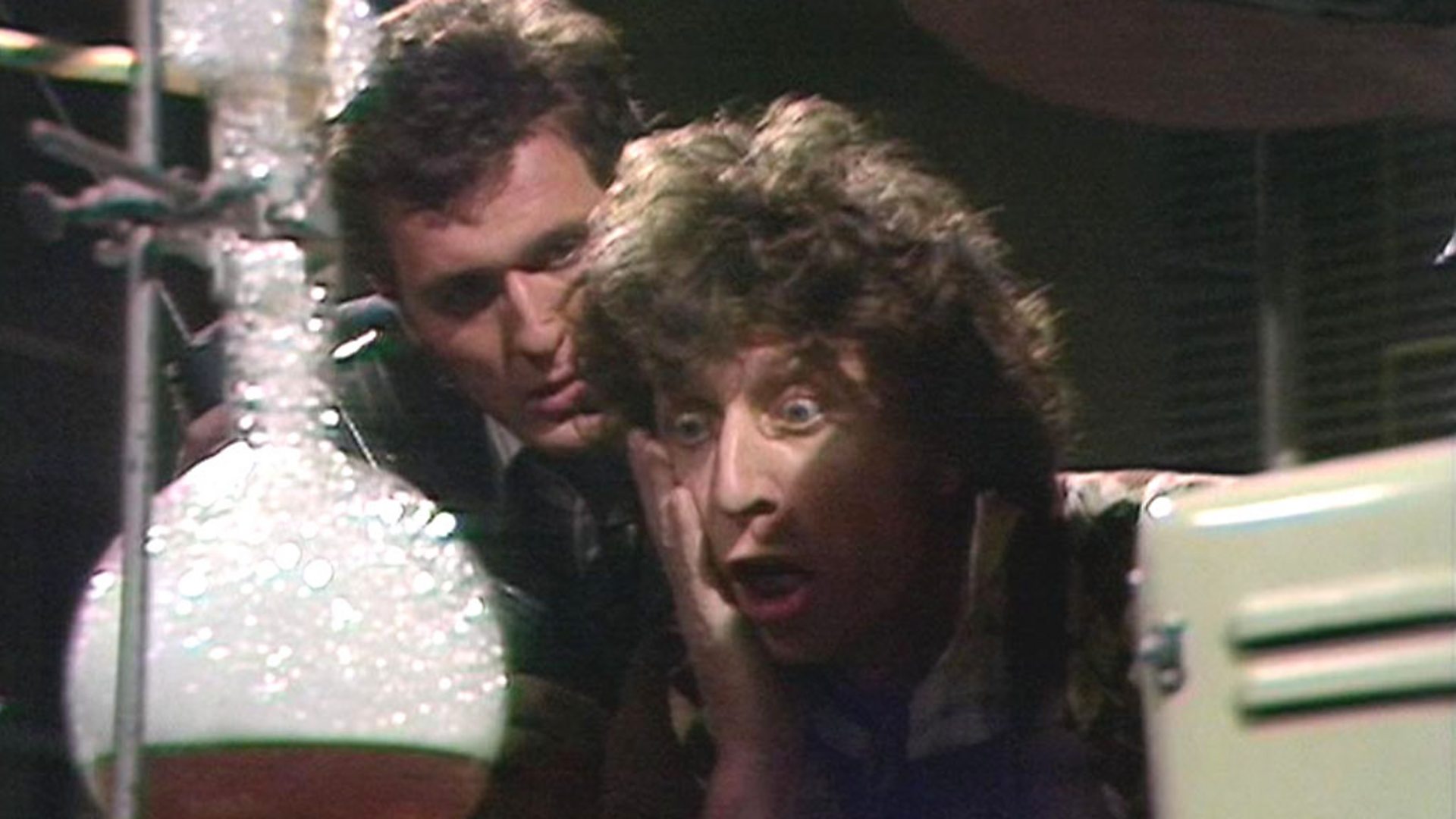 (Photo: BBC)
Whenever we get to find out what the Doctor keeps in their pockets, the results are always surprising. Over the years many notable items have emerged from those capacious pockets, including magnets on strings, an oil can, a teddy bear, an etheric beam locator, a caramel apple, a toy Batmobile, a tuning fork and a copy of Teach Yourself Tibetan.
But the best window into the Doctor’s messy soul came just after Three regenerated into Four. His pockets were found to contain the following: a certificate offering Freedom to the city of Skaro; a Pilot's licence for the Mars Venus rocket run; a galactic passport, and a card guaranteeing honorary membership of the Alpha Centauri Table Tennis Club. Oh, and a fake pigeon. Never leave home without it.
What would be your pick if you got to raid the TARDIS lost and found?!