Stephen Fry has said he feels "grateful to be armed against the enemy" after receiving his first Coronavirus vaccine.

The actor-writer-comedian and former Doctor Who guest star was jabbed in the historic surroundings of Poets' Corner in London's Westminster Abbey, which is being used as a temporary Covid-19 vaccination center.

Numerous British monarchs and eminent figures including Charles Dickens and Laurence Olivier are buried at the Abbey, which has hosted 16 Royal Weddings and every Royal coronation since 1066.

Sharing a photo of himself being vaccinated on Twitter, Fry wrote: "Never felt a thing! Fancy the call to be jabbed sending me to Westminster Abbey of all spectacular places. Under the eye of the poets of Poets Corner and a dozen sleeping kings and queens… thank you #NHS staff and volunteers. Amazing work. Grateful to be armed against the enemy!" 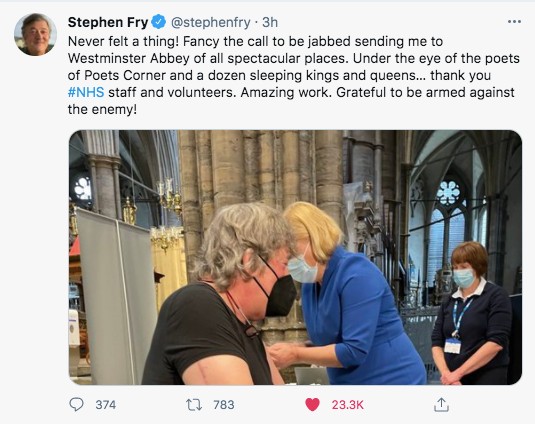 In an interview with ITV News, Fry joked that being given the University of Oxford, AstraZeneca vaccine was "the only bad side" of the experience for him as a "Cambridgman." Fry studied at the University of Cambridge, Oxford's great rival, in the late '70s before beginning his performing career.

He added, more seriously: "We all do this and it helps, and that’s a strong feeling – especially in a world where we’re so divided in other things. If we can unite at least about ourselves as a species, because it’s a pandemic… then maybe that will help us with other fights we have.”

We recently made Stephen Fry our British Icon of the Week, and feel very glad that he's been safely vaccinated.

Christian Bale Explains Why He Doesn't Consider Himself a 'Leading Man'

10 Roles That Made Us Appreciate Andrea Riseborough

A Survivor’s Guide to Close Combat With ‘Doctor Who’ Aliens