Editor’s Note: We culled your questions from Facebook and Twitter for this week’s questions for an Orphan Black crew member.

My name is Chris Bridges and I am the Prosthetic designer for Season 4 of Orphan Black. My job is to plan how the makeup effects will be made and build them at my workshop. On a TV series you only have a few days to build the prosthetics so the design has to meet the director's vision, but not be too complicated to make.

For Episode 3, Dr. Leekie's body is dug up from the garage basement and we had to make a decomposing version of Dr. Leekie. The challenge was to do that convincingly and still keep him recognizable. The head was sculpted in clay, molded in silicone, and poured up in silicone. Teeth were added, paint was added, then hair. The process took about a week. 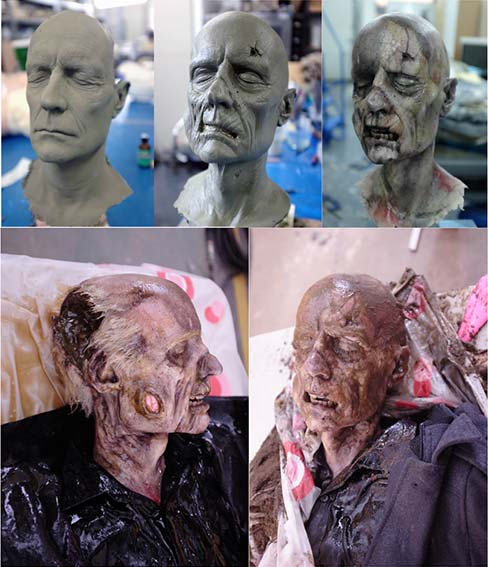 And now, for your questions:

1. @Goofyfan_Chuck via Twitter: Do Ari and Tatiana have input as to the kind of prosthetics they'll have glued to them? (i.e. smaller, or nastier)

CB: The actor can always weigh in if they choose, but typically, it is the director’s vision of the script that guides the look and feel of the prosthetics.

2. @ThatAlbertLimon via Twitter: With the return of Neolution this season, should we expect to see a lot more intricate work by you and your team?

CB: Oh yes, there are lots of very cool things coming your way.

4. amy ‏@a_ahlkwd via Twitter: Did u have to make special mommy tummy for helena?

CB: Yes, we did make a baby bump for Helena. We have molds for various stages of pregnancy, ie. 6 months or full 9 months term. Once the size was approved, we picked a skin tone that matched Helena and made a belly. Normally the silicone bellies are made like a corset so it just laces up at the back.

5. @mini_oddity via Twitter" What has been your proudest achievement on Orphan Black thus far?

CB: I think the Dr. Leekie body was our proudest achievement. Not only was it a blast to meet and work with Matt Frewer, it was a really cool effect.

6. Ruby L. via Facebook: What are the biggest challenges you face when coming up with a new concept?

CB: There are two things I find challenging: one is designing and building an effect in a very short amount of time — we only get a week or so to build. The other is to take someone’s vision and to do it justice — it’s something I really strive to get right. For instance, the Dr. Leekie head had a polyp in the cheek that contained a maggot bot. Once removed, the director asked if there was a way to make it glow in the dark. It was a small thing that was cut apart and we couldn’t put a light under it or inside, so we opted to go with a glow-in-the-dark pigment. We mixed it into the skin of the polyp and the ooze inside and charged it up with light right before the scene. Then, when the lights were turned down low, everything looked bioluminescent — it turned out great.