The play's cast and crew were there to pick up the awards, including Jamie Parker, who performed during the show as the grown-up Harry Potter, and Jack Thorne, who wrote the plays and is now adapting Philip Pullman's fantasy trilogy His Dark Materials for TV. 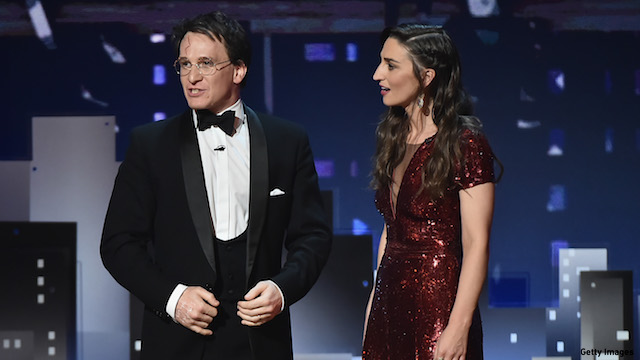 Thorne took to Twitter a few hours later, paying tribute to the "incredible witch" behind the Harry Potter phenomenon. We're sure he meant that in the best possible way, of course:

Certainly the Harry Potter author seemed unperturbed, quoting the phrase in another tweet and quipping how she felt sure it wasn't "rhyming slang."

As for the night's other winners, veteran actress Glenda Jackson won Best Actress in a play for her performance in Three Tall Women, while Andrew Garfield won Best Actor in a play for his turn in a revival of Angels in America. Lord Andrew Lloyd Webber was honored with a lifetime achievement award.

The biggest winner of the night, however, was The Band's Visit, a musical about an Egyptian band visiting an Israeli desert town. It picked up an impressive 10 prizes, including Best Musical, Best Actress (Katrina Lenk) and Best Actor (Tony Shalhoub).

And one of the biggest moments was Bruce Springsteen performing "My Hometown." Springsteen was part of the awards ceremony, receiving a Special Tony Award for his one-man show, Springsteen on Broadway:

Fellow musician Billy Joel presented the award to his colleague and longtime friend: