First Look: Cillian Murphy is Back as Tommy Shelby for More 'Peaky Blinders'

Cillian Murphy has climbed back on the horse as Tommy Shelby, as filming on season five of Peaky Blinders gets underway.

The first photo of the Dunkirk star in character has been released, showing Tommy in smart attire, but still wearing the peaked hat that gave his gang their nickname. 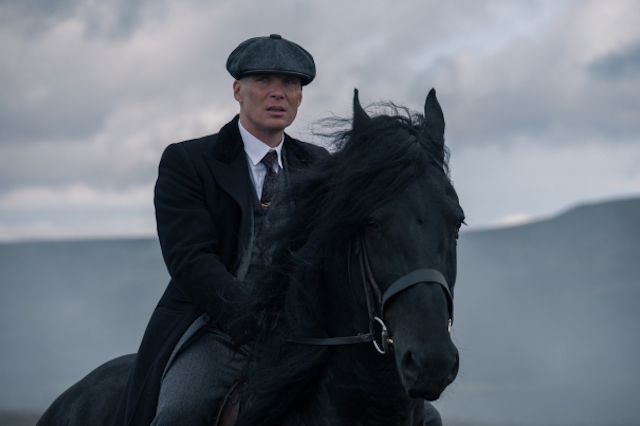 According to Deadline, the new season will see the Shelby crime family get back together amid the fallout from the Wall Street Crash of 1929.

Here's the official synopsis: "Series five of Steven Knight's crime family saga finds the world thrown into turmoil by the financial crash of 1929. Opportunity and misfortune are everywhere. When Tommy Shelby MP (Cillian Murphy) is approached by a charismatic politician with a bold vision for Britain, he realizes that his response will affect not just his family's future but that of the entire nation."

The new season is filming now in Manchester, England, with lots of familiar faces returning, including Helen Crory as Aunt Polly, Paul Anderson as Arthur Jr, Sophie Rundle as Ada, Kate Phillips as Linda, and Natasha O'Keeffe as Lizzie, as well as Aiden Gillan and Jack Rowan as father and son fixers Aberama and Bonnie Gold.

No word yet on whether Tom Hardy will be reprising his role of rival gang leader Alfie Solomons: It's unlikely, given the, uh, events of season four, but we live in hope.

Season five of Peaky Blinders is due to start streaming in the U.S. in early 2019.

Are you excited to see Tommy back in the saddle?