Since he began his career in the mid-'90s, Daniel Mays has established himself as one of the U.K.'s most prolific and dependably excellent actors. On TV he's appeared in everything from Doctor Who to Line of Duty – more on both later – and portrayed the "Great Train Robber" himself, Ronnie Biggs, in acclaimed 2012 miniseries Mrs Biggs. Along the way, he's also racked up roles in hit movies including Vera Drake, Nanny McPhee and the Big Bang, and Fishermen's Friends. He's so consistently in-demand, in fact, that he says the enforced seven-month break he experienced during this year's pandemic is the longest he's gone without a job.

Now, he's taking on a meaty lead role in chilling British miniseries Des, which premieres Thursday (October 15) on Sundance Now. Mays portrays Detective Chief Inspector Peter Jay, the London police officer tasked with identifying the victims of Dennis Nilsen (portrayed by David Tennant at his creepiest), a Scottish serial killer and necrophile who murdered at least 12 young men and boys between 1978 and 1983. Based on a biography of Nilsen by Brian Masters – who's played by Jason Watkins – it's not your typical true-crime series. Nilsen confesses to murder straight away, but getting him to reveal the names of his victims is quite a bit trickier, as Mays' character soon finds out.

How much did you know about the Dennis Nilsen case before you were cast in Des?

Obviously I knew bits because it was such a high-profile case [in the U.K.], but the more research I did, the more it became clear that what Nilsen did was just so unfathomable to us normal people. The beauty of Des – and it's obviously influenced heavily by [the biography] Killing for Company – is that Luke Neal's scripts really do endeavor to ask questions as to how this person came to be Dennis Nilsen, infamous serial killer. It's not gratuitous: there is no violence or blood or gore, which I think was a really wise decision. It's much more of a methodical psychological investigation into who he was and how he came to be. And it's very much told through the prism of my character, detective Peter Jay, and Brian Masters, his biographer. It's a very odd dynamic that these three characters have – the only thing Jay and Masters have in common is obviously Nilsen. So it's definitely not a love triangle, but it is a triangle of sorts.

Do you feel as though your character is really the eyes of the audience in a way? His reaction to Nilsen's atrocities is definitely the one we can most relate to.

Completely – when I met Lewis Arnold, the brilliant young director, that was completely how he was sold to me. He said to me: 'Look Danny, the bottom line is that Peter is the heart and soul of the piece. He's the one that brings the humanity: it's through his eyes that we learn all about the identities of the victims.' And as the drama unfolds, you'll see that Peter Jay is someone who takes the weight of each of these individuals on his shoulders and wants to get closure for the families. And on top of that, he's dealing with an insurmountable amount of pressure in terms of having the media on his back and the upper echelons of the Metropolitan Police pressuring him to bring the case to a close. So he is without doubt the eyes of the audience, and for me, that was such a joy to play.

How did you set about researching this real-life role?

I mean, there have been absolutely tons of documentaries on Dennis Nilsen – we were given them to watch, but they're all on YouTube anyway. And what was great is that Peter seems to have been in every one of them! So in terms of that visual interpretation of what he looked like, how he sounded, and how he moved, I could tick that box very easily. I also read Killing for Company, which was very helpful. But I guess the biggest source of research was that I actually went to meet Peter's widow, Linda, and his son from his second marriage, Simon, for lunch. We all got on like a house on fire. Peter only died a couple of years ago so their grief and their memories of him were palpable, actually. It's always such a huge responsibility when you play somebody real, but even more so after meeting Linda and Simon, I really wanted to honor his memory. They were just so generous in sharing their time and memories of Peter and it became clear that he was a brilliant policeman. He was a reserved man, diligent, and very much your traditionally trained British policeman. 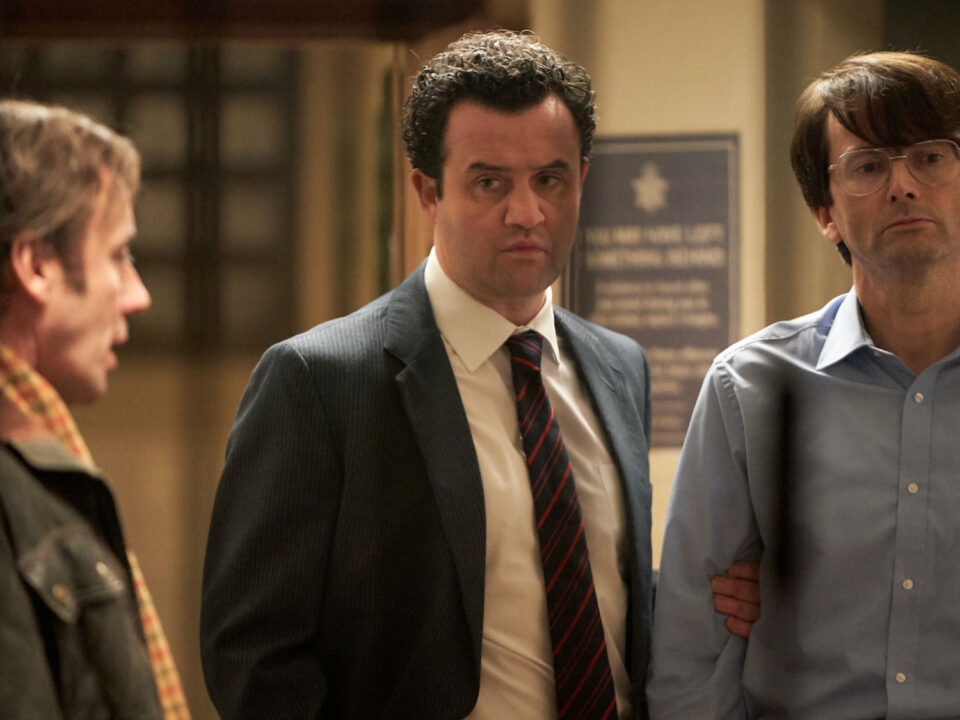 As soon as you watch YouTube footage of Nilsen, you realize how chillingly spot-on David Tennant's performance really is. What was the reaction you had when you were acting opposite him?

Well, I remember we had this brilliant read-through, and David was one of the last actors to arrive. And even in the read-through, you could tell that he was kind of channeling something. It was incredibly thorough and he sounded exactly like the real Dennis Nilsen. But then when we came to film the interrogation scene in the first episode, and Nilsen goes into this description of dissecting bodies, it was something I've only experienced very occasionally in my 20-plus years of acting. Sometimes when you're across from such a master of their craft, you kind of just come out of it a bit. And certainly when they were shooting that scene and I was off-camera feeding him lines and just watching him deliver that monologue, it was one of those moments. I just came away from it thinking: 'This is clearly one of the most eerie but brilliant and captivating performances I've ever sat across from.'

Which of your many roles do members of the public tend to ask you about most?

You know, black cab drivers go, 'Look, I've got Ronnie Biggs in the back.' Line of Duty has been another popular one as well. And Des has been on recently in the U.K. and got ITV's biggest [ratings] figures this year, so the response has been fantastic. It's gratifying to be part of such a huge homegrown hit because obviously I know how much work went into it.

*Spoiler Alert Ahead* If you’re not caught up on Line of Duty season three, read at your own risk...

Well, when everyone watches that [episode], they tend to have exactly the same reaction as I had when I first read the script. I remember going into the audition with [writer-creator] Jed Mercurio and saying, 'Please tell me survives,' and he went: 'No, no, he doesn't – we're literally going to pull the plug on the lead character in the first episode.' And I remember just thinking: 'Wow.' But that first episode gave me an amazing hour of TV to play that character – obviously I was gutted he got killed off, but it was definitely a sea change in my career. It really took me up a notch and I got BAFTA-nominated, so it just goes to prove what they always say: 'There are no small parts, only small actors.'

And finally, do you have fond memories of shooting your Doctor Who episode, "Night Terrors"?

Oh yeah, because I worked with the brilliant Matt Smith and had an absolute ball with him. And it was a really fun episode to shoot because I was just playing a normal human – not an alien or anything – and all this wonderful stuff was happening around me. Like, we got miniaturized and sucked into this doll's house and my overriding memory of that experience was being chased by these enormous paper dolls and trying to fend them off! Matt Smith was meant to be next to me, but he was laughing so much he stepped out of the scene and went around towards the back of the camera to watch. I didn't realize so I just carried on acting and then I saw him just laughing his socks off behind the camera. Honestly, I had a brilliant time with him.

Do you have a favorite Daniel Mays performance?