Welcome to this week’s Doctor Who’s Day roundup, a cosmic bucketful of astonishing fan creativity (this week there are a LOT of cartoons) from the past seven days on the internet and social media.

We begin with a fan phenomenon revolving around the Thirteenth Doctor that, frankly, we had no idea existed until a few days ago, but which has been a source of total delight.

It all started with the following tweet, devoted to Jodie Whittaker’s flexible face: 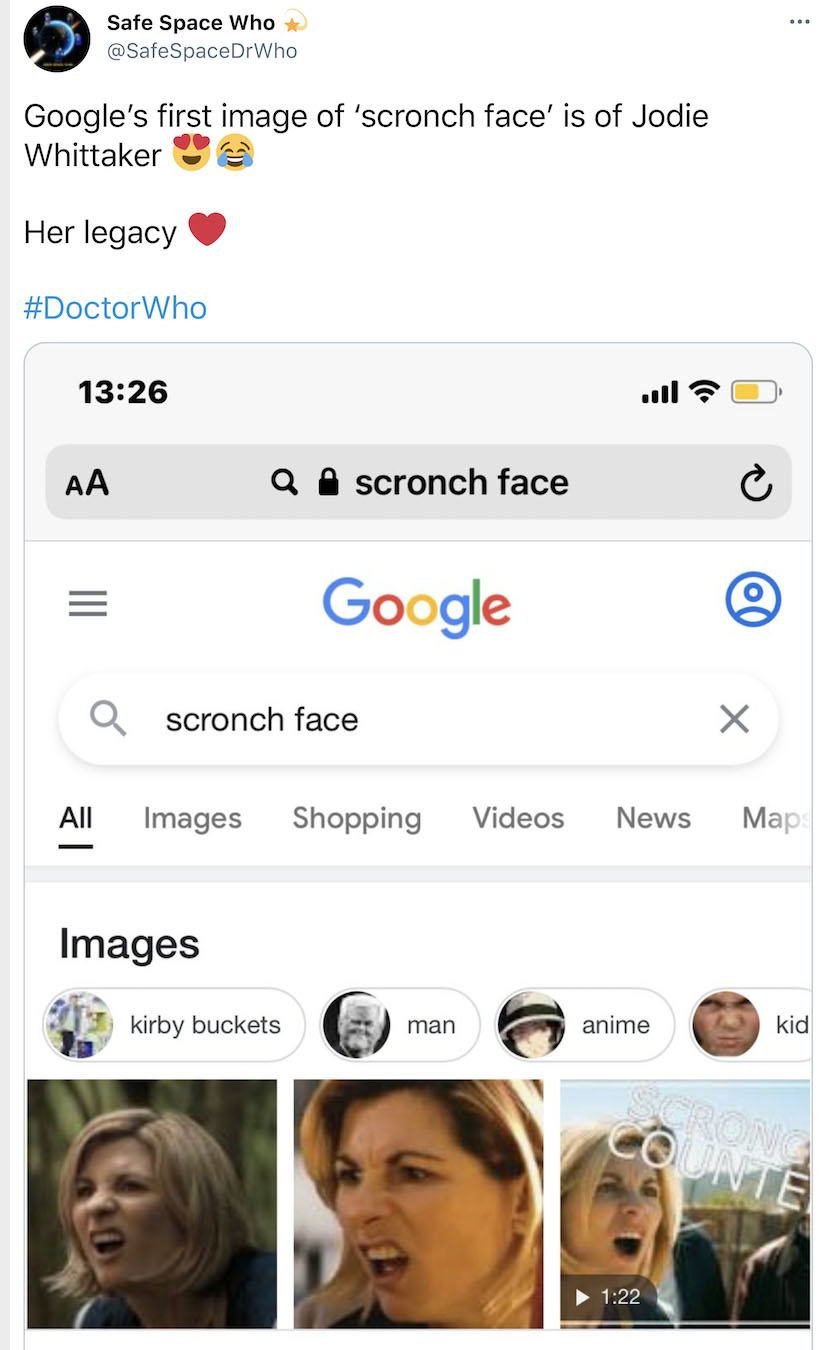 And then as if by magic, scronch memes suddenly swam into focus: 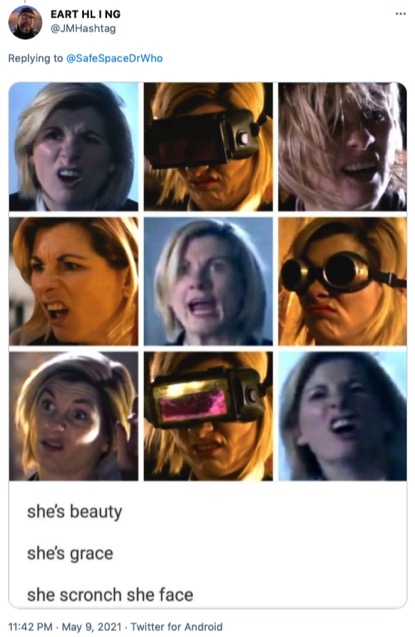 Then we discovered there are cosplayers doing the Thirteen scronch: 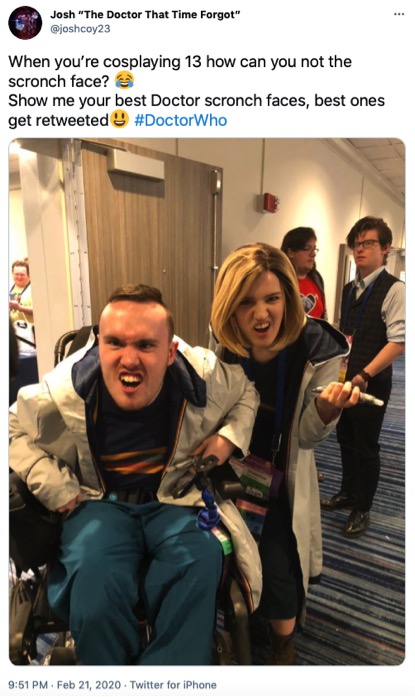 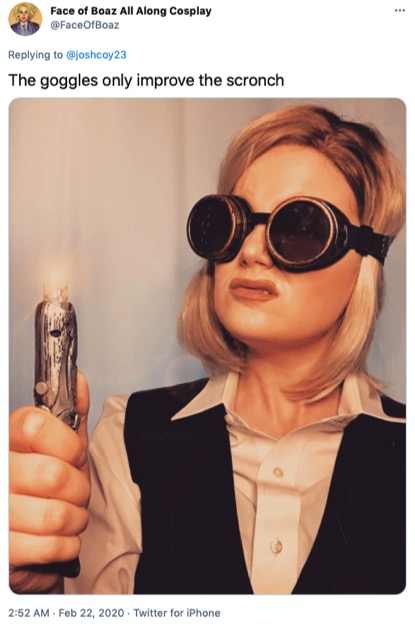 Some serious comparison between Doctor for most scronchable face: 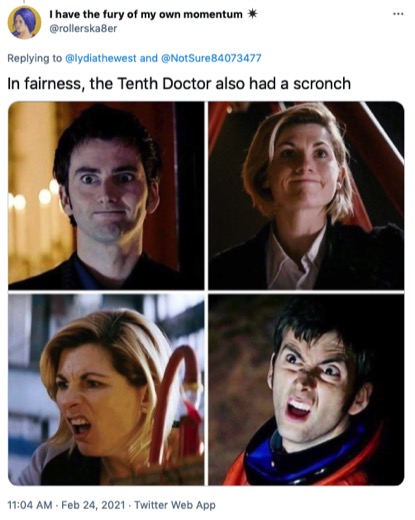 And even a dedicated Twitter feed devoted to Thirteen’s scronch.

And would you be surprised if we said there is fan art? 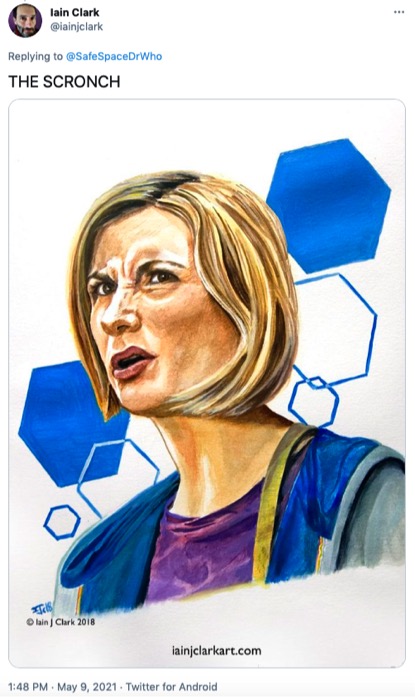 And look, a couple of years ago someone even made this scronch counter, just from one Season with Thirteen:

Hats off and scronchy faces to everyone!

And here’s what else has been going on in space and time this week...

• Billie Piper was on the legendary BBC Radio 4 show Desert Island Discs, talking about her life, and her time on Doctor Who: 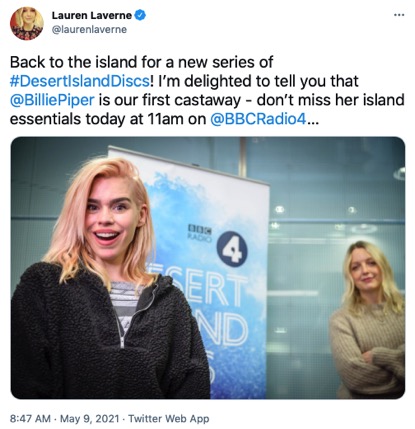 • Remember Will the Doctor mosaic man from a couple of weeks ago? He’s completed his Thirteenth Doctor mosaic (sadly no scronching), and the War Doctor is next: 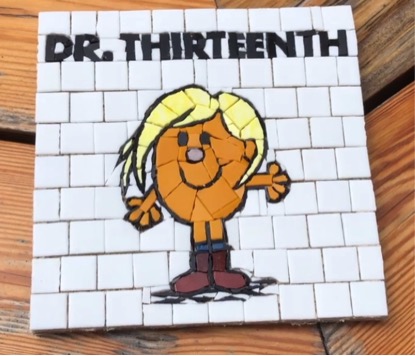 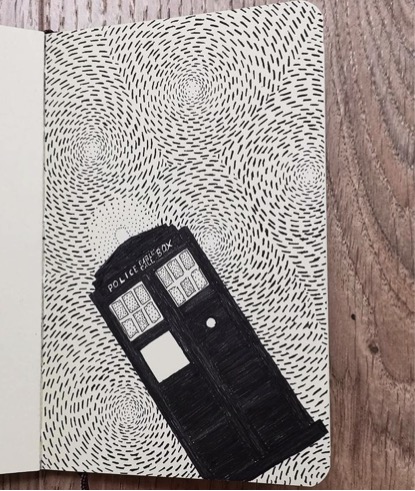 • For reasons that defy explanation, here’s every Doctor Who introduction playing at once:

• And here are all of the Doctor’s pre-fam companions playing at once: 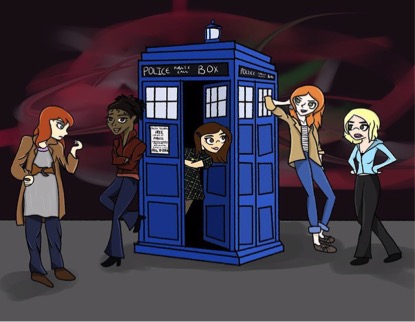 • And for that matter, every Cyberman playing at once: 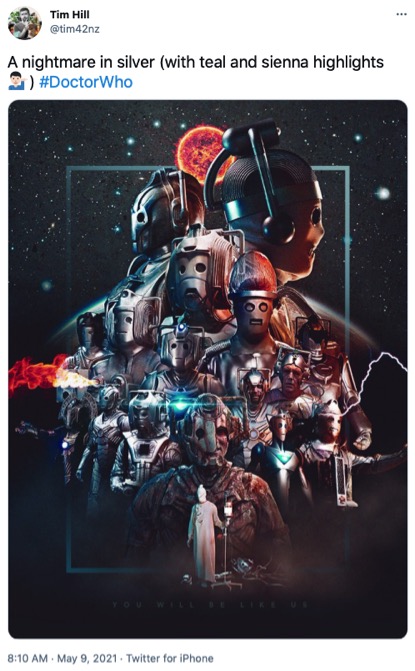 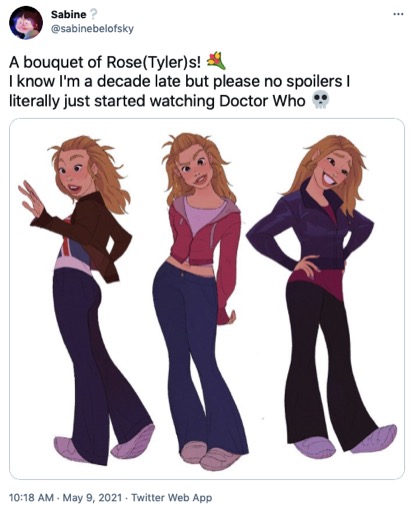 • Big Finish are celebrating a milestone. Not only have they managed to create and release a new Doctor Who – The Monthly Adventures story 12 times a year since July 1999 (275 episodes up to March of this year), their efforts have even been recognized by Guinness World Records:

• And look! There’s even fan art for this achievement, which is good going for audio adventures: 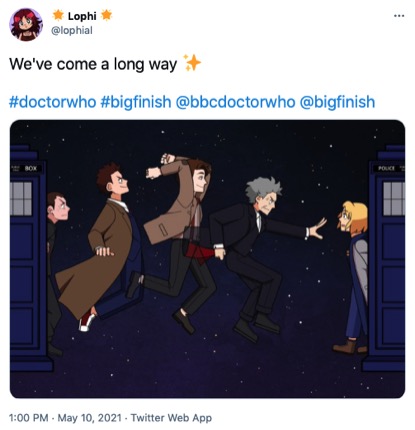 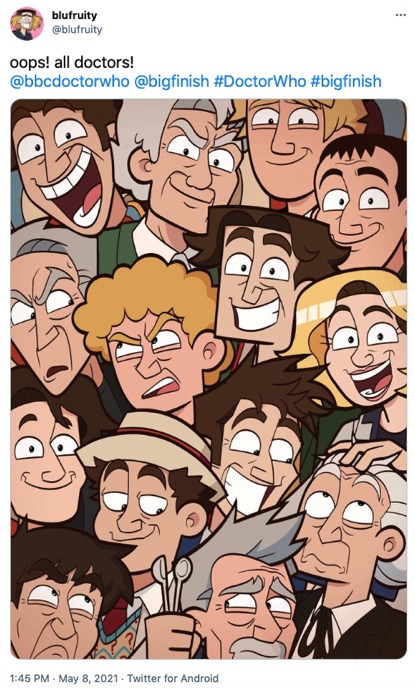 • A wonderful portrait of the Doctor, sans scronch: 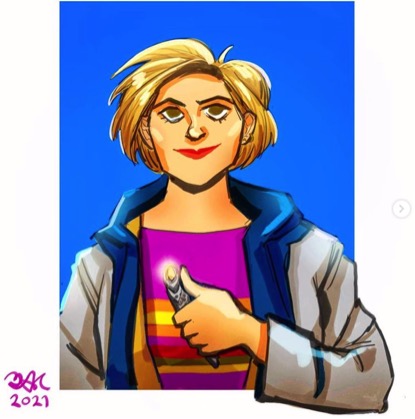 • Look, this is really old, but it’s really, really good and we haven’t applauded it before. Let’s applaud it now, particularly, “Has the TARDIS Always Been This Cold?” 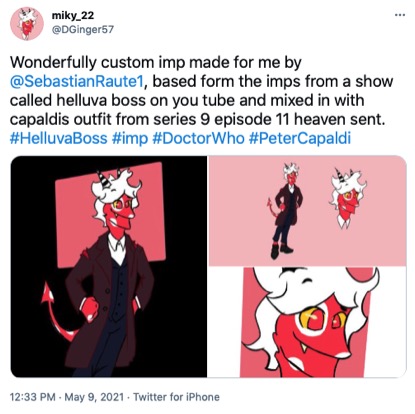 • For an extra kick in the feels, the caption on this reads “Her necklace says 'beloved' in Gallifreyan”: 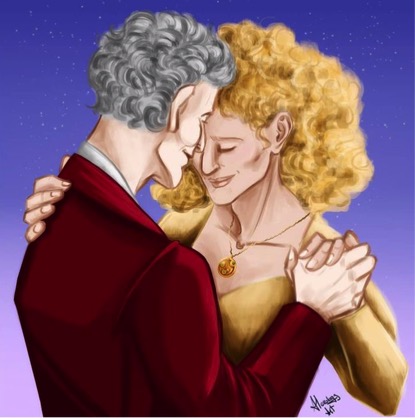 • The cartoon A-Z of Doctor Who creatures continues from @IanCartoons, starting with these two from “The Talons of Weng Chiang”: 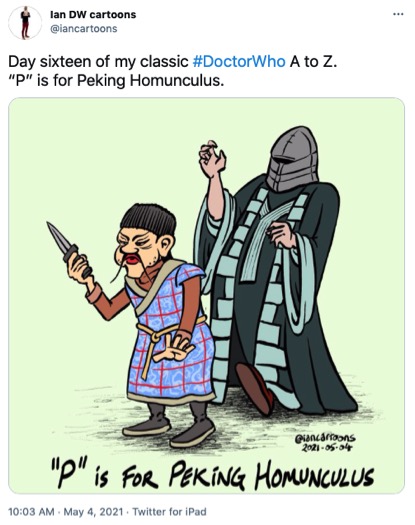 • The Sixth Doctor met this Queen in “The Mysterious Planet”: 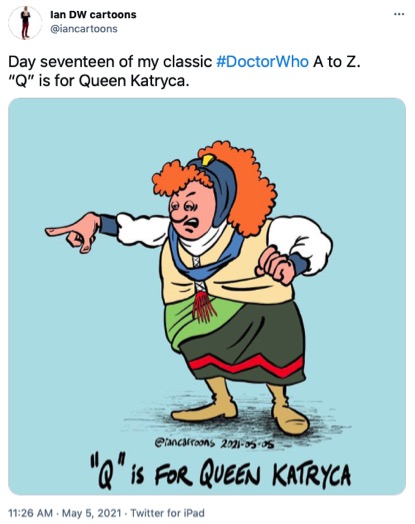 • These guys met the First Doctor in “The Dalek Invasion of Earth”: 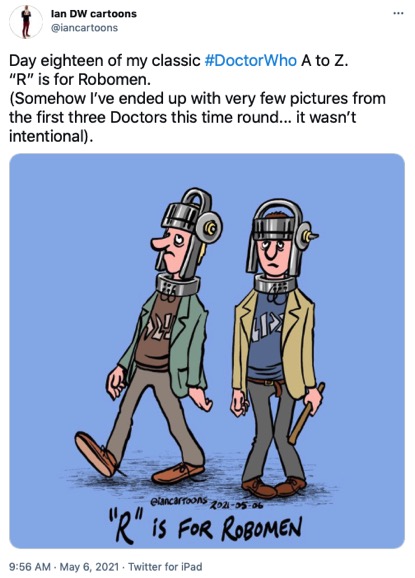 • Some familiar prehistoric lizard people of the land and sea: 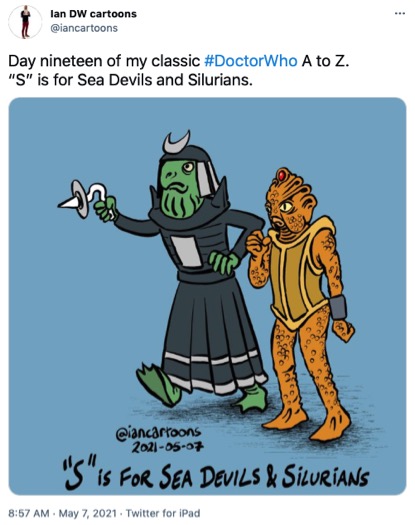 • Ah! Bat-bear-boars that battled the newly-regenerated Seventh Doctor in “Time and the Rani”: 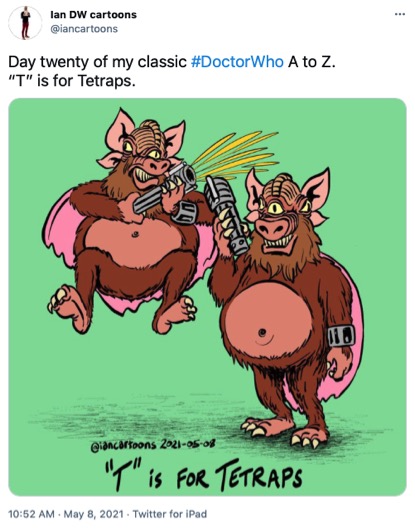 • Those mock-humble hands were last seen facing the Fourth Doctor in “The Sun Makers”: 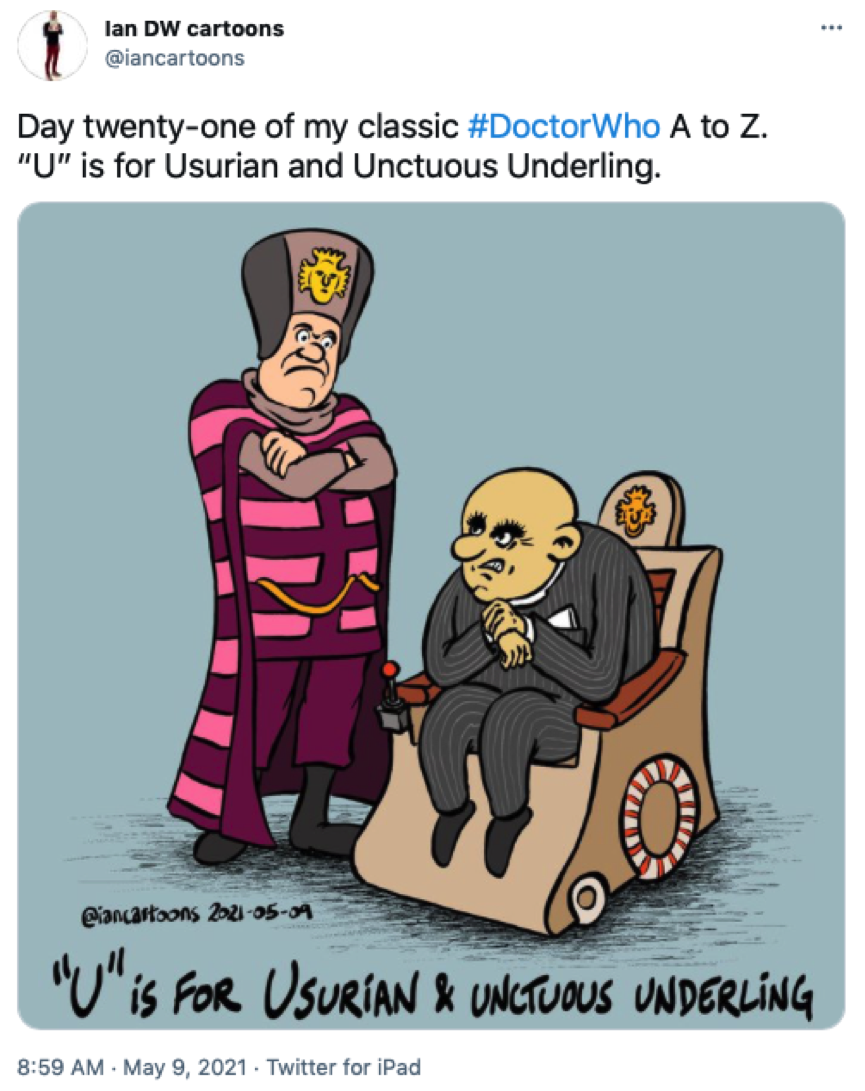 • Note: NOT Vogons, those are from The Hitchhikers Guide to the Galaxy. These are the guys in “Revenge of the Cybermen”: 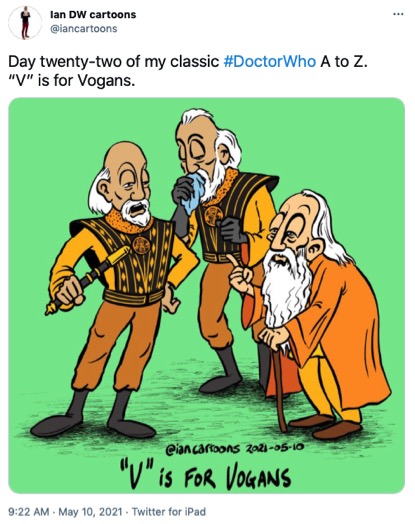 • A dark day for humanity, but hey, at least we met Missy! 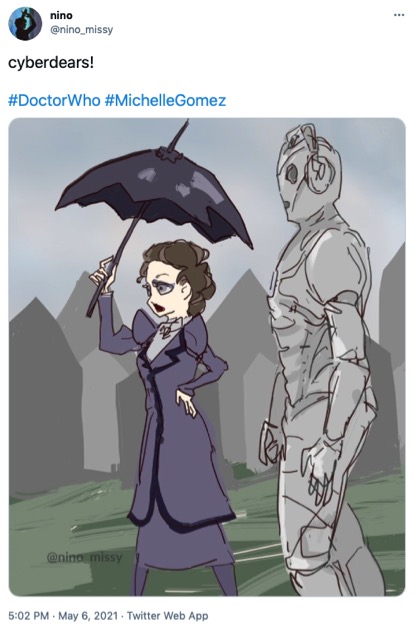 • And this Cyberman is FABULOUS: 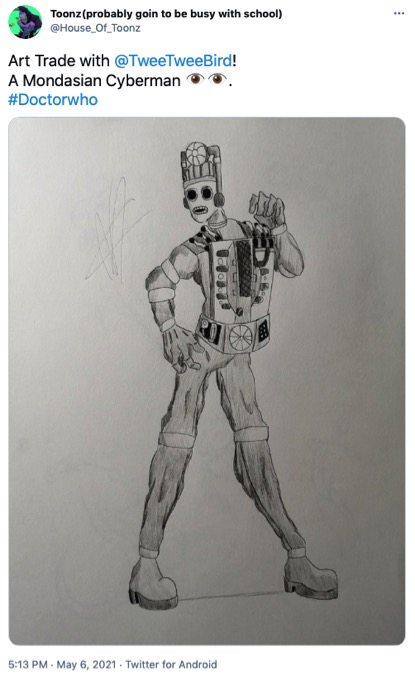 • And to round things off after a bumper week, let’s do what we like to do best; enjoy a reimagined version of the Doctor Who theme, this time a fiery mix of synth and guitar, from YouTuber Jez Hewitt: