'Doctor Who's Day Roundup: The Doctors Land in London

Welcome to this week’s Doctor Who’s Day Roundup, a temporal trawl through the latest time-travel-related happenings across the internet and the wider universe.

And while it was all about San Diego last week, the past weekend has seen Doctor Who land in more familiar surroundings, at the London Film & Comic-Con.

The event was a particularly huge bonanza for Who fans, with the late addition of David Tennant to the guest lineup meaning that an unprecedented nine Doctors were appearing at the show over the course of the weekend – in fact, almost every living Doctor (including David Bradley) was there, with Sylvester McCoy and Jodie Whittaker the only two busy elsewhere with filming commitments.

Of course, this meant the weekend was a particularly fertile one for photography. And although the Thirteenth Doctor herself wasn’t there, there were plenty of cosplayers around to get the keys handed over to them by Peter Capaldi:

The erstwhile Twelfth Doctor was also on hand for an enormous spontaneous group photo opportunity:

Not to mention an encounter with some old friends that might have brought back some bad memories:

Pearl Mackie also found herself reliving a not-too-pleasant part of Bill’s past:

And the Fan Show gang got in on the act, showing off their own Thirteenth outfits:

It’s fair to say David Tennant’s arrival on the Sunday caused a stir:

This fan managed to bag an impressive FIVE Doctors over the course of the weekend – if anyone has evidence of breaking this record, let us know!

Here’s what else has been happening in time and space this week:

• A fantastic new promotional photo of the Thirteenth Doctor has landed:

• In case you’re not yet tired of Season 11 interviews from last week’s San Diego Comic-Con – and why would you be? – then here’s the new crew talking to Variety, with Jodie Whittaker explaining how casting the Doctor as female doesn’t change the essence of the show:

• Former showrunner Russell T Davies has been hanging around his old haunts of Cardiff, and courtesy of his Instagram page here’s a completely unemotional visit to one particularly memorable location:

• Tosin Cole celebrated his 26th birthday last week, and we’re trying not to think too much about the fact that he will be the first ever main cast member on the show to have been born after the original run finished airing in 1989…

• The First Doctor, as played by David Bradley, returns to Big Finish Productions alongside his Adventure in Space and Time co-stars Claudia Grant (Susan), Jemma Powell (Barbara) and Jamie Glover (Ian). Watch the trailer for The First Doctor Adventures Vol. 2:

• With a brand new series of Thirteenth Doctor comics set to launch alongside Season 11 later this year, Titan Comics have announced that there will be 13 variant covers for the first issue. This one, by superstar artist Babs Tarr, adorns the cover of the latest issue of the industry’s Previews magazine:

• And if you’ve never read Titan’s Who comics before, here’s a handy primer on just what you’re missing and just why you should be:

• We’ll always have “LONDON 1965”: but after seven weeks, 26 seasons and over 500 episodes, the epic run of classic episodes on streaming platform Twitch is finally over. Here’s how the #doctorwhoontwitch gang saw in the closing moments of “Survival”:

• And here’s a lovely set of cartoons inspired by the marathon as it went on:

• What lengths did Steven Moffat and Rachel Talalay go to in order to protect the reveal of Missy’s identity? Find out in our 10 Things guide to “Dark Water.”

• You thought David Tennant was done with sci-fi? Of course not. He’s lending his voice to a character, coincidentally (or not?) named “Doc,” in the upcoming animation series gen:LOCK, alongside Michael B. Jordan and Dakota Fanning.

• This is nifty – an edited comparison of scenes from “The Runaway Bride” and “Turn Left” that show events occurring simultaneously in the two parallel timelines:

• Andrew-Mark Thompson has been reimagining classic Doctor Who Annuals from years gone by, with Jodie Whittaker’s Doctor replacing the originals: 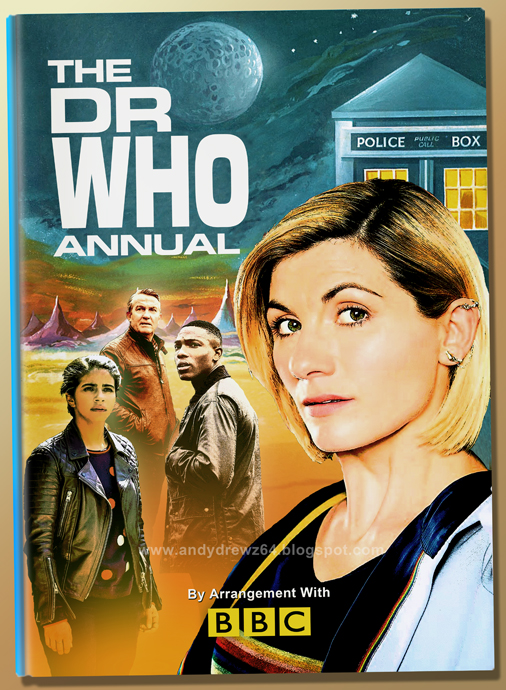 • Let’s round off with some fanart, and first these sets of “Character Weaves” for each of the modern-era Doctors:

• A casting idea for The Master that, let’s face it, would never happen but would also be pretty amazing if it did:

• The wave of inspiration from the latest trailer keeps bringing us fresh takes on Thirteen:

• And since he started off this week’s roundup (and popped up again in the middle), let’s finish with a new rendition of a classic Ten: