'Doctor Who': 10 Things You May Not Know About 'Utopia'

"Utopia" is the story of reunions, friendship and the extreme measures people take in order to survive. It's also the first attempt to pull together some of the dangling threads from previous Doctor Who stories—the many references to John Saxon, the chameleon arch, the Face of Boe's last words, the Time War—and reintroduce one of the Doctor's oldest enemies without anyone guessing what was to come.

And as the opening section of a three-part story, it remains the longest single narrative in the reborn Doctor Who, setting up Martha's exit from the TARDIS and raising the Doctor's hopes for eternal companionship, only to eventually dash them once more. And it features guest appearances from two of British drama's best-loved actors, John Simm and Derek Jacobi.

Derek Jacobi (Professor Yana) was no stranger to Doctor Who, having already played a screenwriter called Martin Bannister who has reason to associate himself strongly with the Doctor in "Deadline," a Big Finish audio drama from 2003. Shortly afterwards he played a robot incarnation of the Master, in the BBC webcast "Scream of the Shalka."

John Bell, who plays the young boy Creet, got his part by winning a competition in the British children's TV show Blue Peter. Aged just nine years old at the time, he had a great time during filming, especially with John Barrowman and David Tennant, as he told Doctor Who Magazine at the time: "John Barrowman, who plays Captain Jack, kept thinking it was his name being called by the director when they were calling for me! So he nicknamed me Little John.

"David Tennant and I are both Scottish and John Barrowman was born in Scotland, so it was a bit of a Scottish invasion! John kept slipping into a Scottish accent and would ask if I'd like a 'Wee cup of tea?'"

He has since gone on to forge a successful career in acting, most notably playing Bain, son of Bard the Bowman, in The Hobbit: The Desolation of Smaug and The Hobbit: The Battle of the Five Armies.

Paul Marc Davis, the sharp-toothed Futurekind chieftain, would return to the Whoniverse in three stories for The Sarah Jane Adventures, playing the Trickster, and appear in the Torchwood story "Exit Wounds" in an uncredited capacity. He is also listed among the cast of Class, making him the first actor to appear in all four Doctor Who-related TV shows since the relaunch in 2005. 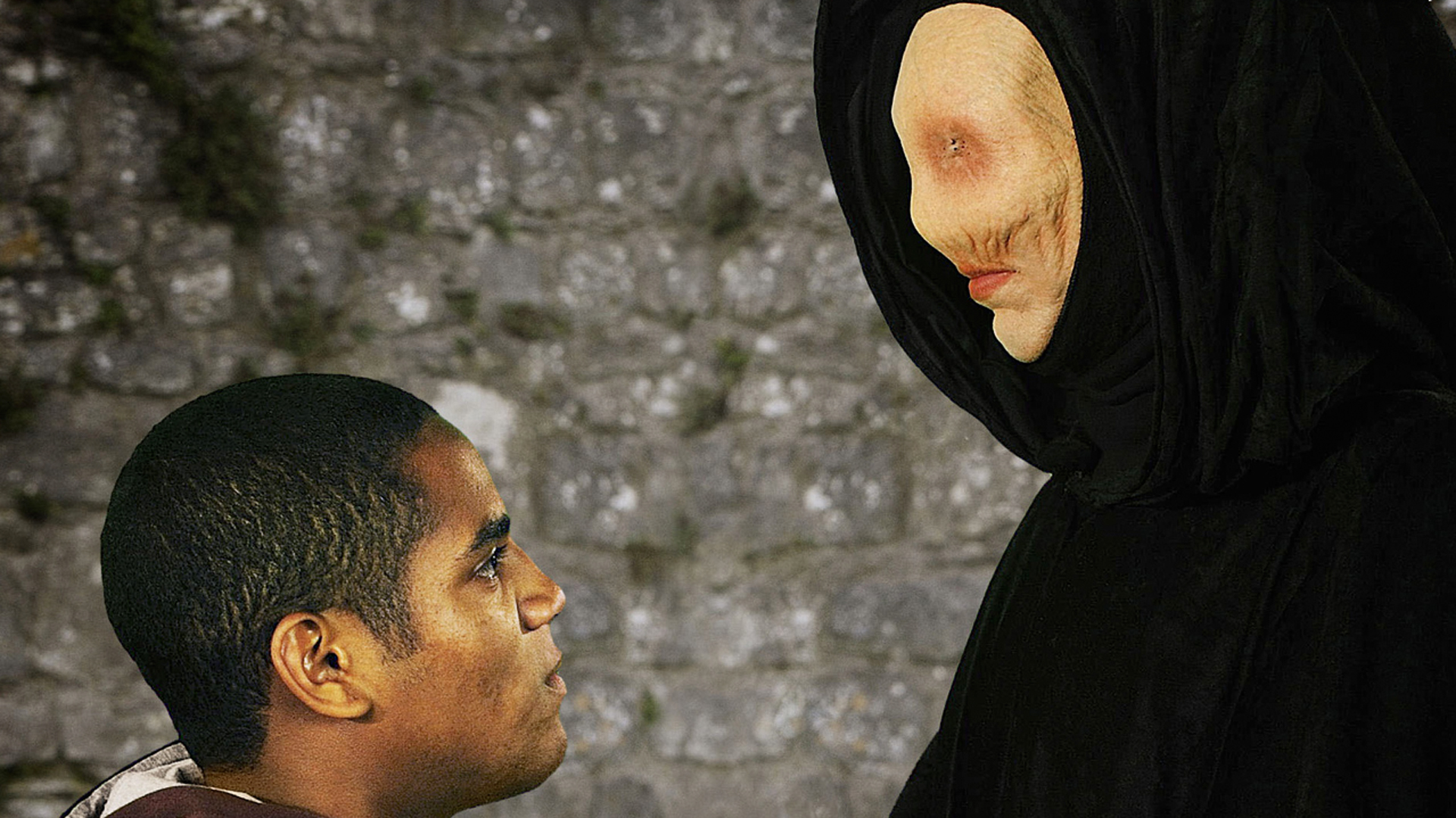 When the Doctor refers to the human race as "indomitable" with naked glee, he's echoing similar sentiments (and the exact word) from his fourth incarnation, on discovering a human spaceship containing a frozen colony of the last humans, traveling to a better life ("The Ark in Space").

Captain Jack tells the Doctor his vortex manipulator took him back to Cardiff in 1869. This means he'll have either been there during the events of "The Unquiet Dead," which took place on Christmas Eve that same year, but before the Ninth Doctor and Rose had even met him, or he'd have just missed them by a matter of days.

The positioning of the opening credits was crucial. The normal credits prominently featured the TARDIS flying through the vortex. But in "Utopia," a similar shot had just been seen on screen, in which the TARDIS travels along the vortex with Captain Jack clinging to the outside, so the decision was taken to insert a brief scene depicting the Futurekind about to embark on a human hunt, then cut to the credits. This made it clear that Jack hadn't been somehow shaken off in transit. During the episode's DVD commentary, Russell T Davies and David Tennant joke that a new set of credits should be made, showing a CGI Jack hanging on for dear life.

As the Master stares at his pocket watch, he can hear his own voice, and the voices of his previous incarnations, specifically Roger Delgado as the First Master (from "The Daemons"), and Anthony Ainley's evil cackle. There had been a plan to also include Eric Roberts' voice from his stint as the Master in the 1996 Doctor Who TV movie, but there were problems getting clearance, so it was left out.

Also on the DVD commentary, Russell T Davies explained that the Master used the chameleon arch to get away from the Time War, and had himself genetically reprogrammed as a human baby (unlike the Doctor becoming John Smith, a man of similar outward appearance to himself) as a way of hiding: "He was a baby. A human baby. Because that's what the Master did — he was so frightened and terrified that he wiped himself as a baby and was found on the Silver Devastation."

As a little note of continuity between Doctor Who and Torchwood, the music played when Jack chases the TARDIS is a variation of the Torchwood theme.

The Doctor's reference to "hermits united," as an explanation for his lack of local knowledge to Professor Yana, is a reference to the British social media site Friends Reunited, which was very popular at the time of broadcast. The site was designed along similar lines to the American site Classmates, offering estranged former schoolmates a chance to catch up.

Incidentally, "Friends Reunited" would make an excellent alternate title for this story.

NEXT: 10 Things You May Not Know About ‘The Sound of Drums’