‘Doctor Who’: 10 Things You May Not Know About ‘The Tsuranga Conundrum’

“The Tsuranga Conundrum” is a beautifully shot version of that great archetypal science fiction story, with the crew trapped on a spaceship with an unknown foe.

Being Doctor Who, some of the scary bits are funny and some of the funny bits are scary. And there’s some hugging and learning and a pregnant man.

Here are a few things to keep a special eye out for, the next time you watch:

1. When the Doctor explains the antimatter drive, she’s actually giving a decent lecture describing actual quantum physics. This is real science. The only reason we don’t have antimatter drives now is that the only way to create positrons is by pair production, so any energy gained would not exceed the energy used to create it. And we don’t have an iPhone version of the Cern collider either.

2. Antimatter has appeared in Doctor Who before, albeit not always handled with such loving reverence. After “The Three Doctors,” in which the Second and Third Doctors arrive in an antimatter universe to confront their old foe Omega, the Fourth Doctor describes the power process well in “Planet of Evil,” but can later be seen carrying antimatter around in a bucket.

3. And in “Earthshock,” the Fifth Doctor’s companion Adric is killed trying to prevent a ship powered by an antimatter drive from crashing into the prehistoric Earth. He fails, and the subsequent explosion also causes the extinction of the dinosaurs. Adric’s name is an anagram of scientist Paul Dirac’s surname. Dirac, among other things, predicted that antimatter must exist, and formulated the Dirac equation to describe the behavior of fermions.

4. Brett Goldstein, who plays Atos, is another in a long line of British comedians to take a dramatic role in Doctor Who, but he has another credit that should endear him to Whovians. He helped Catherine Tate write a theatrical version of her sketch show for a 2016 tour, and appeared on stage with her in a variety of roles.

5. Similarly, Ben Bailey Smith, who plays Durkas Cicero, is a stand-up comedian who goes by the name Doc Brown. He has among his acting credits the role of DS Joe Hawkins in Law & Order UK, co-starring alongside another former 10th Doctor companion Freema Agyeman, as well as Bradley Walsh and Peter Davison.

6. The Pting is a rare creature indeed, so unusual that its creator, Tim Price, has been given his own credit in the show, which is the first time this has happened. The only similar event in production history occurred when Terry Nation, who created the Daleks — he wrote all of their early stories, and created Davros — registered them for copyright purposes, but this was very much a product of his scripts, as opposed to the creation of a specific alien to be introduced by another writer.

7. We know the Doctor is tough on her sonic screwdriver, but not as tough as her adversaries can be. Not lease when the Fourth Doctor’s trademark sonic was destroyed by Tereleptils in the Fifth Doctor adventure “The Visitation.” And the Pting isn’t even the first creature to try and eat it. Prisoner Zero had a bite in “The Eleventh Hour” and a sky shark tries to make off with it in “A Christmas Carol.”

8. Something in the word Pting suggests the influence — unconscious or otherwise — of Monty Python’s Flying Circus. While the word itself doesn’t appear in any of the celebrated comedy team’s sketches, there are two interesting made-up words that offer similar comic possibilities. In their celebrated Election Night sketch, one of the candidates for the Silly Party has the glorious name “Tarquin Fin-tim-lin-bin-whin-bim-lim-bus-stop-F'tang-F'tang-Olé-Biscuitbarrel” and in the movie Monty Python and the Holy Grail, one of the other words that the Knights who say “Ni” are partial to (as well as ecki ecki ecki and zoowop) is ptang.

It’s not as fanciful a link as you might think, given that Douglas Adams, who created The Hitch-hiker’s Guide to the Galaxy, wrote for both Doctor Who and Monty Python in his time. Let’s call this one a maybe.

9. There’s a nod between British TV institutions, as Graham says he has seen every episode of the historical medical drama (and PBS hit) Call the Midwife. This isn’t the first crossover between the two shows. Midwife star Jessica Raine appeared in the Eleventh Doctor story "Hide," and Stephen McGann, who plays Doctor Patrick Turner, is the brother of Eighth Doctor Paul McGann.

10. And it looks like the affection is mutual, as a 2019 episode of Call the Midwife, set in the early 1960s, showed Sister Monica Joan watching an early episode of Doctor Who enthusiastically. 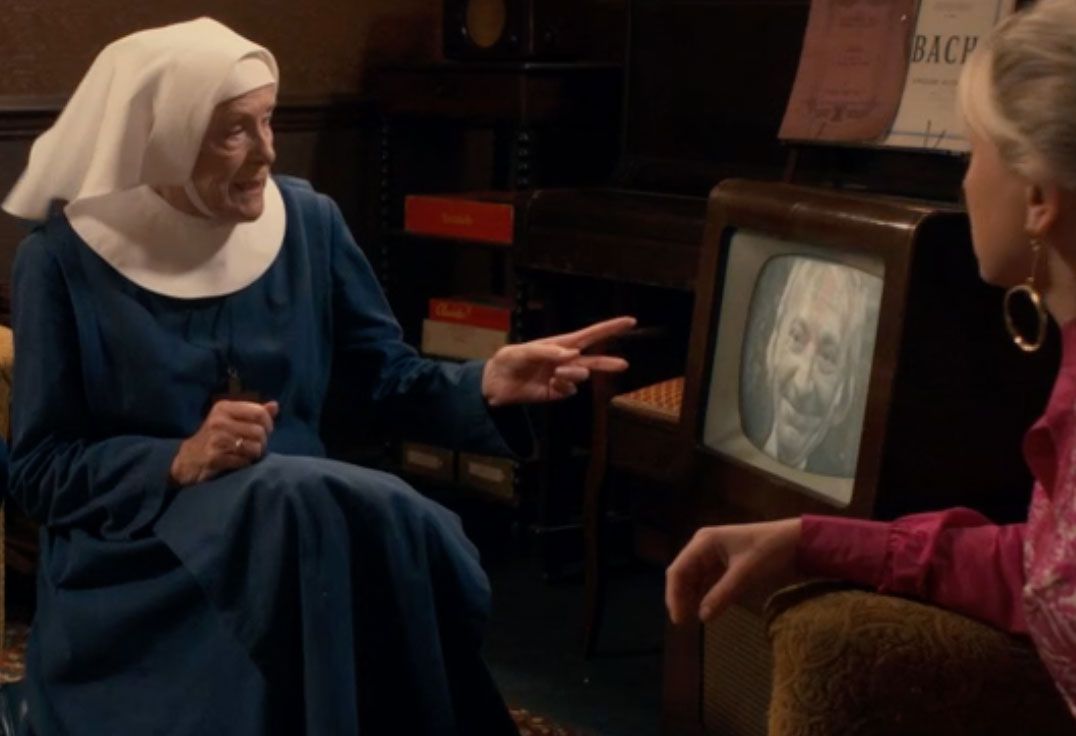 Mind you, her enjoyment was slightly marred by nurse Phyllis Crane’s caustic response: “I can’t be doing with this. Grown men running about in fancy dress, making out a phone box can travel through space and time!”

What's your favorite moment from "The Tsuranga Conundrum"?