‘Doctor Who’: 10 Things You May Not Know About ‘The Timeless Children’

For a show that has time travel and regeneration as part of its DNA, it’s surprising that Doctor Who doesn’t explode its own backstory with inconceivable paradigms more often. And this is the story that packs the biggest punch in terms of challenging audience perceptions of who the Doctor is.

It does the same thing for the Doctor herself, of course. And offers an eternal rebirth cycle for the Cybermen, with the Master at his malevolent best, wearing a burgundy frock coat that looks quite a lot like the Eleventh Doctor’s. It is, as they say on social media, a lot.

Here are a few things to keep an eye out for, the next time you watch.

1. This episode is riddled with deep-cut references to the Doctor’s previous adventures on Gallifrey. For example, she rightly points out that she has fought the Matrix before, as happened when her Fourth incarnation had to track down the Master, in “The Deadly Assassin.” That story is also the source of the Master’s reference to “assassinating presidents together” and the Panopticon, the seat of parliament on Gallifrey and home to the Eye of Harmony.

And in “The Ultimate Foe,” the Sixth Doctor had to battle the Matrix while dealing with the machinations of the conniving Valeyard. The Valeyard is later revealed to be yet another incarnation of the Doctor, which does beg the question – are we ALL going to turn out to be the Doctor eventually?

2. Similarly, the Master gets misty-eyed talking about running away from Borusa, a Time Lord who appeared in both “The Deadly Assassin” and eventually came a cropper in the Fifth Doctor’s reunion with most of his former selves, “The Five Doctors”:

3. This story also continues a Doctor Who scripting tradition, in which the Master is suspiciously well-informed about British TV. When he requests an alliance with the Cyberium, he claims “I deserve to be your business partner because I have performed well in all tasks," a fairly common cliché spoken by the contestants in the British version of The Apprentice.

4. Sharmus. Graham and Ryan have a brief discussion about how to gird their loins. Well, if they knew their Biblical quotations they would know it refers to hitching up long robes so that they don’t get in the way if you’re in a hurry.

1 Kings 18:45–6 reads: “And Ahab rode, and went to Jezreel. And…Elijah…girded up his loins, and ran before Ahab to the entrance of Jezreel,” and by the time it appeared in the New Testament, it was already a metaphor: “Wherefore gird up the loins of your mind, be sober, and hope to the end for the grace that is to be brought unto you…" (1 Peter 1:13).

5. Remember when everyone was going crazy about the prophecy of “the Hybrid” at the end of Season 9? This story does follow a few of the key parts of the legend:

The Master has merged with the Cyberium to become a hybrid, he stands over the ruins of Gallifrey, and unravels the Web of Time (by finding out the true origins of the Time Lords). He breaks a billion hearts (killing the Time Lords) to heal his own (finding out that part of him is the Doctor has made him incredibly upset).

6. Before the episode was aired, listings included references to a character called “Fakout,” who was played by a “Barack Stemis.” Barack Stemis is an anagram of “Master is Back.”

It is also an anagram of “Karmas Bisect,” “Macabre Skits” and “Crab Mistakes,” but that’s not important.

7. When we see Tecteun standing in his Time Lord finery alongside two other Time Lords, the production notes included this tidbit: "We can assume [the other two] might be Rassilon and Omega." Director Mark Corden took the part of Omega – a disgraced Time Lord later to battle the Third, Second and First Doctors in “The Three Doctors” – and for Rassilon, he brought in a lookalike of Don Warrington who played the imperious Time Lord leader in many Big Finish productions. 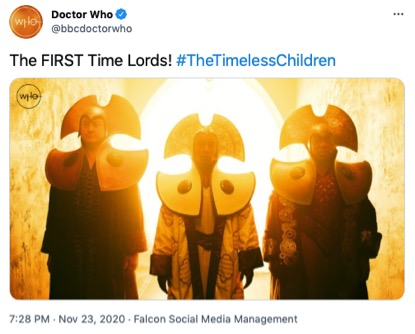 8. There are at least two direct poetic quotations within the script. The Master crows over the Doctor with the line, “Look upon my work, Doctor, and despair,” which is a quotation torn from Percy Bysshe Shelley’s Ozymandias: “My name is Ozymandias, King of Kings; Look on my Works, ye Mighty, and despair!”

10. This is the biggie. When we see the Doctor overloading the Matrix with her history, one of the images that flashes past is the Fourth Doctor battling Morbius in “The Brain of Morbius.” This is another tale of Time Lord versus Time Lord (albeit with a Frankenstein twist) and the Doctor’s past is projected onto a screen during a mind battle. We see his three previous incarnations and some other faces too, which presumably refer to previous Doctors before the one we know as the First. This rather neatly underlines the idea that she may have regenerated many times before what she believes to be her first incarnation.

The full list of memories she conjures up include (deep breath):

All incarnations of the Doctor we know about, including the War Doctor, the Fugitive Doctor and the various incarnations of the Timeless Child up to and including Brendan; seven of the Morbius faces of the Doctor; the TARDIS; Rose Tyler; Donna Noble; Clara Oswald; Amy Pond; Rory Williams; River Song; Sarah Jane Smith; Bill Potts; Wilfred Mott, Captain Jack Harkness; Martha Jones; Mickey Smith; Davros; The Master (all incarnations including Missy; Ashad and his Cyberguards; the Cyberium; Praxeus-infected birds; Nikola Tesla; Rosa Parks; Tzim-Sha; Sutekh; Scaroth; the Abzorbaloff; the Queen of the Skithra; Empress of the Racnoss; Sharaz Jek; Daleks; Sontarans; Autons; Sil; Dregs, Vocs; Ogrons; Ood; Sea Devils; Zygons; Kasaavin; Ux; Scarecrows; Sycorax; the Solitract; the Morax and the Sisters of Plenitude)... whew.

What's your favorite part of "The Timeless Children"?