'Doctor Who': 10 Things You May Not Know About 'The Runaway Bride'

As a story, "The Runaway Bride" has a lot to do in a relatively short time. It takes the Doctor from the departure of Rose, and therefore his lowest personal ebb in the two years since he first reappeared, and introduces him to a new, abrasive companion who is entirely unimpressed with him, to start with at least. He then has a riddle to solve, an alien to beat and finds time to call in at the creation of the solar system, and that aggressive new friend winds up turning down a spot in the TARDIS (for now at least), on the reasonable grounds that he sometimes doesn't know when to stop.

The story of a stolen bride was originally pencilled-in for the middle of Season Two, with the Doctor and Rose being confronted by the arrival of Donna Noble at the end of "Rise Of The Cybermen" / "The Age Of Steel." Once the production team had received the offer of a second Doctor Who Christmas special (after 2005's hugely successful "The Christmas Invasion") this was the script idea that seemed most fruitful, and it allowed "Tooth and Claw" to be shifted into that slot, thereby ramping up the season's Torchwood story arc, as the Doctor and Rose meet Queen Victoria.

The opening sequence, in which Donna arrives in the TARDIS to the Doctor's evident confusion, had to be refilmed from the version we see at the end of "Doomsday." As David Tennant revealed in this episode's online audio commentary, this was because the lighting supervisor had changed from one episode to the next, and neither the TARDIS interior nor the two actors looked quite the same as they had done the first time.

The sequence in which the TARDIS chases Donna in her taxi was something Russell T Davies had wanted to see in Doctor Who ever since he was a child. There's a nod to this onscreen, as there are two children watching the whole thing from a nearby car. Russell had originally planned to include the chase sequence in "School Reunion," with the Doctor rescuing Sarah Jane Smith, but it was felt that it would take up too much time within that story.

When the Doctor tries to get Donna to jump from the TARDIS, she screams back, "Am I blinking flip jumping! I'm supposed to be getting married!" a phrase which may need a little explaining. "Blinking flip" is a compound expression, using two words that have commonly been used to replace actual swear words in polite British discourse. Blinking is a stand-in for bloody and flip—as in "flipping heck!"—is a stand-in for another well-used word that begins with "F." The construction "Am I (swearword)!" is the kind of sarcastic non-interrogative question that is beloved of skeptical Brits for whom saying "No, thank you" wouldn't have the same impact.

Catherine Tate, star of her own BBC comedy sketch show and heavily in demand, had been unavailable to attend the script read-through with the rest of the cast, so her place was taken temporarily by David Tennant's then-girlfriend Sophia Myles, who of course played Reinette in "The Girl in the Fireplace."

The bank notes that the Doctor uses to create chaos and confusion as the robotic Santas attack had to look feasible as British currency but not so much so that anyone could attempt to use them as legal tender. Two notes were created; a £10 note with the face of David Tennant instead of the Queen and the written legends "I promise to pay the bearer on demand the sum of ten satsumas" and "No second chances—I'm that sort of a man" and a £20 note featuring the face of Doctor Who producer Phil Collinson. These had the Fourth Doctor quotes "There's no point being grown up if you can't be a little childish sometimes" and "There's no point in being grown up if you can't be childish sometimes," both taken from "Robot." 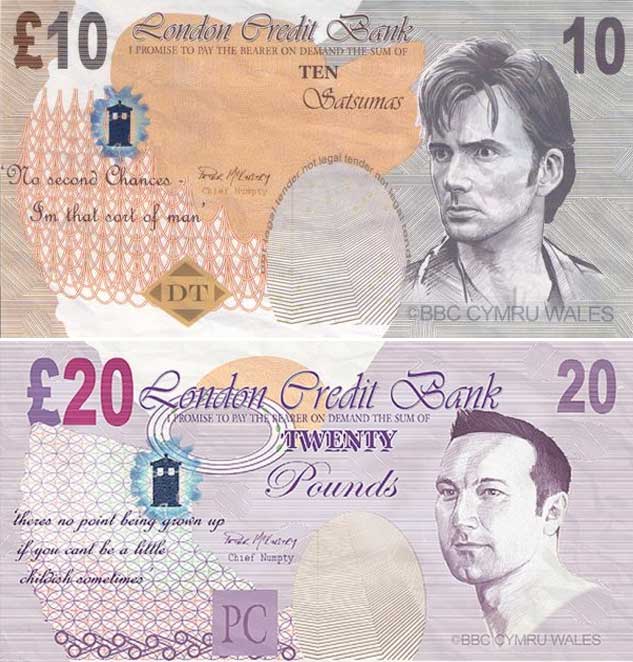 Two key cameo appearances were taken out in the edit. The first was in a scene where the Doctor and Donna take a bus to Donna's wedding, where they find Mrs. Croot, the lady—played by British comedy stalwart Bella Emberg—who tells Elton Pope where to find Jackie Tyler in "Love and Monsters". The second was a scene in which the Doctor and Donna roll up to H.C. Clements in Donna's Smart car, and David Tennant's parents, sister-in-law and two nieces appear in the background.

Russell T Davies wanted his climactic final act to take place at Stonehenge, to reflect the scale of the Racnoss's ancient influence upon the planet Earth. This was abandoned at the scripting stage, with the Thames Flood Barrier taking the place of the stone monoliths. Stonehenge would eventually pop up as the host site of the Pandorica (and this speech) in "The Pandorica Opens."

Another lost moment would have seen the Doctor take Rose's top—the item of clothing Donna finds on the handrail inside the TARDIS and uses to accuse him of abducting women—and hurl it angrily into space. According to this episode's DVD commentary by David Tennant and Julie Gardner, this was felt to be a little melodramatic.

Murray Gold wrote an original song for this episode's wedding reception scene, to tweak the Doctor's feelings of loss and guilt. Loosely based on the old soul classic "The Snake" by Al Wilson, "Love Don't Roam" was performed by Neil Hannon, leader of the band The Divine Comedy (who, just to fully square the circle, had made a guest appearance on The Catherine Tate Show earlier in 2006):

Here's a fan-made video of the song, illustrating the lyrics with scenes of the Doctor and Rose, just to really rub it in:

NEXT: 10 Things You May Not Know About ‘Smith and Jones’