'Doctor Who': 10 Things You May Not Know About 'The Pyramid at the End of the World'

The Doctor's companions are often there to hold him back from his least compassionate impulses, their fresh eyes helping to remind him of the beauty of the universe. So it's fascinating to note that "The Pyramid at the End of the World," is a story in which it's the companion who essentially damns her own planet and species in order to save her Time Lord friend.

Elsewhere, we find out that sonic shades are wonderful, but no match for a well-placed tumbler lock, and that sometimes the fate of an entire world can hang on a broken pair of spectacles.

If you go by word count alone, "The Pyramid at the End of the World," is the longest title for a Doctor Who story ever. However, it is second to "The Doctor, The Widow and the Wardrobe," if you count characters.

The part of the Secretary General of the United Nations is played by Togo Igawa, who has already contributed to the Whoniverse by playing Dr. Tanizaki in the Torchwood story "Cyberwoman." One of his other claims to fame is an appearance in Thomas and Friends (part of the Thomas the Tank Engine franchise), adding the voice of the train Hiro, a wise Japanese engine, who is famously known as the "Master of the Railway" (although in this case being a master is less worrisome than we're used to).

Other Doctor Who cast members who have also offered their voices to Thomas the Tank Engine include John Hurt, Olivia Colman, Miranda Raison and Kerry Shale.

The Doctor congratulates Erica by exclaiming, "By George, she’s got it!," which quotes an iconic moment in the musical My Fair Lady:

This is not the only George Bernard Shaw reference in Doctor Who. The Seventh Doctor referred to his companion as Eliza (after Pygmalion and My Fair Lady's Eliza Doolittle) in "Ghost Light," and he was seen reading The Doctor's Companion in "Dragonfire."

The Doctor has come across a few pyramids in his time, from the First Doctor adventures "The Keys of Marinus," "The Aztecs" and "The Daleks' Master Plan" to "The Wedding of River Song" (home of Area 52) and "The Rings of Akhaten." And of course there were "The Pyramids of Mars," a Fourth Doctor adventure neatly teased in this fan-made trailer:

Bill wears a satin bomber jacket with Okinawa embroidered on the back. While this is a commercially available item of clothing (it comes from a British women's clothing outlet), there's a parallel between the discussions in this episode about the beginning of World War III ("basically, we're against it") and one of the final battles of World War II. The Okinawa campaign lasted for 82 days in early 1945, and pitted the U.S. Tenth Army against the Japanese Thirty-second Army in a vital skirmish over key air bases. 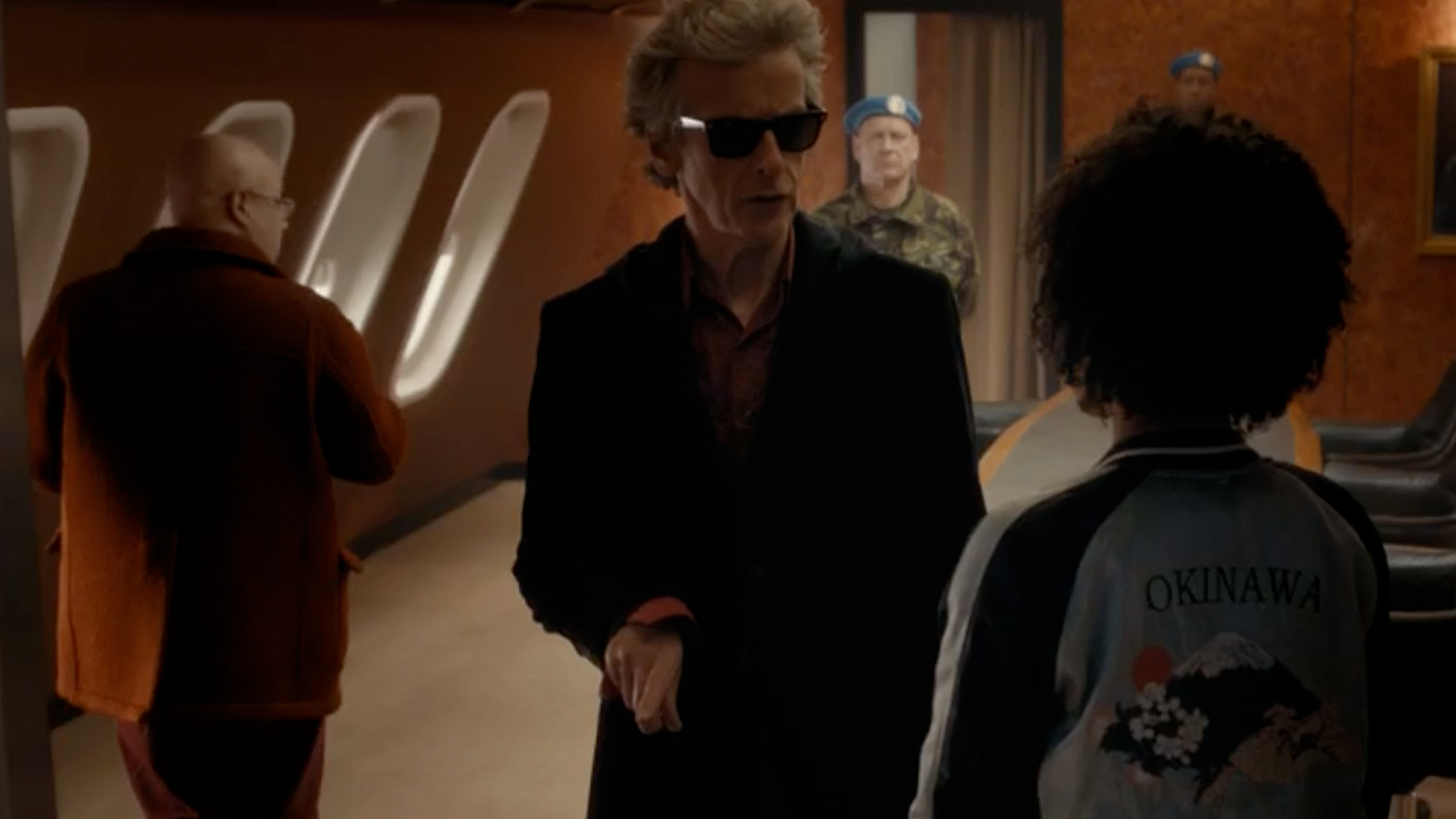 The Doomsday Clock is a purely metaphorical device, a way of suggesting that mankind may be the agents of our own downfall and faster than we'd like to imagine. However, while this episode was being filmed, the Doomsday Clock, as maintained by The Bulletin of the Atomic Scientists Science and Security Board, was altered from three minutes to midnight, to two-and-a-half minutes to midnight. This is not due to the influence of alien invaders, but reflects growing unease at the fractious state of world politics.

Tony Gardner, who plays the unhappily hungover scientist Douglas, is probably best known to British viewers as the alien dad Brian Johnson in the CITV sitcom My Parents Are Aliens. He also appeared alongside Peter Capaldi—and fellow Who-alums Chris Addison and Rebecca Front—in the satirical comedy The Thick of It:

Poor Turmezistan, the (only available in the Whoniverse) eastern European country in which the pyramid is sited, is also the location of the training camp set up by rebel Zygons from the group Truth or Consequences in "The Zygon Inversion."

The Doctor wryly notes that the future Earth wouldn't be his first dead planet, which is a reference to at least two previous adventures. The first episode of the 1964 story, "The Daleks" had the title "The Dead Planet," and of course there's the Tenth Doctor desert epic, "Planet of the Dead."

All three military leaders ask the Doctor, "What do you think, Mr President? Did we just give peace a chance?" a direct reference to the 1969 single written by John Lennon and Yoko Ono and credited to the Plastic Ono Band:

NEXT: 10 Things You May Not Know About ‘The Lie of the Land’