'Doctor Who': 10 Things You May Not Know About 'The Lie of the Land'

In "The Lie of the Land" we see a return of the cold and slightly cruel Doctor who appeared at the beginning of season seven, much to the consternation of his new best friend Bill. We also see him fake a regeneration, which is new, and try and pit his wits against an alien intelligence and fail, which isn't.

Although it makes a brief appearance in the background of one shot, this story counts as one of only a handful not to feature the TARDIS (well, technically two handfuls, as there are 10 in total). These include "Mission to the Unknown," "The Silurians," "The Mind of Evil," "The Dæmons," "The Sea Devils," "The Sontaran Experiment," "Genesis of the Daleks" and "Midnight."

This is not the first time that the Doctor has appeared to take sides with an invading force in order to subvert them from within. A large part of the plot to the Fourth Doctor adventure "The Invasion of Time" sees him taking on the role of Lord President of Gallifrey, allowing the Vardans to march in, and exiling his companion Leela to the wastelands, where she immediately forms a resistance movement.

Time Lords appear to write their own rules around regenerations and what they can be used for. The Doctor has not only faked his own (which must have come as a shock to Bill, bearing in mind she's not seen one before), he's used regeneration energy to grow back his own hand ("The Christmas Invasion"), to heal himself from a Dalek direct hit ("Journey's End") and to fix River Song's broken wrist ("The Angels Take Manhattan"). The Fourth Doctor's companion Romana used her regeneration energy to change her face several times, seemingly on a whim ("Destiny of the Daleks"), while the Time Lords have forced a regeneration on the Doctor, from Second to Third, as a punishment for his meddling ways ("The War Games"). And of course River Song donated her regeneration energy to save the Doctor, having poisoned him in "Let's Kill Hitler."

The Magpie Electricals shop makes a welcome return, having first been seen in "The Idiot's Lantern" and with branded items that have appeared quite a few Doctor Who adventures since. It proves the rude health of this particular brand in the Whoniverse, although it's interesting to note that the TV through which the Doctor first appears, when broadcasting, is not made by Magpie. The Monks are clearly not Magpie fans: 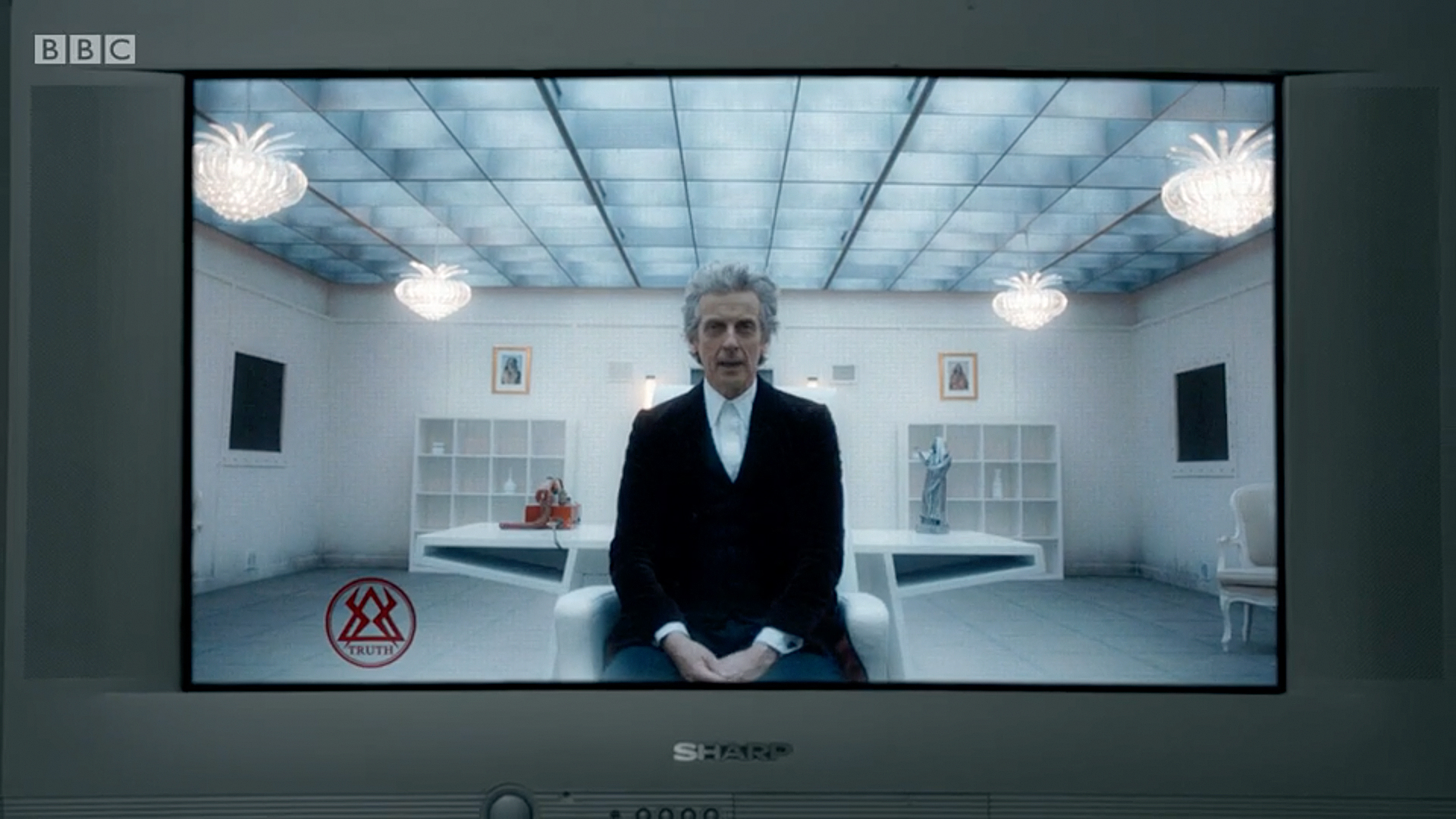 When Bill is led to believe that the Doctor has alerted the Monks to her presence, she challenges him, saying, "Did you actually just call them, you nutter?" This is a fine use of British slang. "Nutter" can be a relatively affectionate term applied to someone who is doing something so eccentric it calls into question their mental competence, which is how Bill is using it. However, it can also be used pejoratively to describe someone with learning disabilities or mental health issues, and can even be used as an insult when a person's behavior is so far beyond the bounds of social acceptability that they appear to have sociopathic tendencies.

The Doctor's captivity on a boat out to sea is an echo both of Missy's enforced stay in the vault, but also the beginning of the Third Doctor adventure "The Sea Devils," in which the Master is first seen in an island prison UNIT made for him. He later manages to coerce some of the guards to help him, much like the Doctor does here.

Speaking of which, when describing his efforts in convincing the guards to see his point of view, the Doctor exclaims, "And there's loads of them, I could do with a Strepsil." This is reference to a popular throat sweet in the U.K.

Missy's repertoire of piano pieces has extended, and now includes both the jaunty ragtime of Scott Joplin's "The Entertainer" and Erik Satie's minimalist masterpiece Gnossienne no. 1:

Satie's tune has appeared in Doctor Who before, although not played on the piano. "Image of the Fendahl" features a scene in which a hiker (who is about to come to a sticky end) whistles the melody.

Nardole's Tarovian neck pinch isn't the first nod to Star Trek (which had a very similar Vulcan nerve pinch) in season 10. The Doctor refers to the TARDIS's chameleon circuit as a cloaking device in "The Pilot," and of course "Oxygen" begins with the Doctor intoning "Space: the final frontier," one of Star Trek's iconic lines. What you may not know is that Leonard Nimoy, who played Spock in Star Trek, invented the idea of the nerve pinch for the 1966 episode "The Enemy Within," when working on a way for his character to immobilize Captain Kirk with dignity and minimal effort in a fight.

And finally, the moment when the Doctor reveals his trick to test Bill is already very reminiscent of an iconic scene from the movie Charlie and the Chocolate Factory, and as if to underline the point, he also cries out "You did it! You did it!" just like Willy Wonka:

NEXT: 10 Things You May Not Know About ‘Empress of Mars’