'Doctor Who': 10 Things You May Not Know About 'The Husbands of River Song'

Every time River Song appears in the Doctor's life, it is a cause for celebration (for us) and deep concern (for both of them). The Doctor knows how River's life will end, and River realizes that at some point she'll meet the Doctor and he won't know who she is, which can only add stress to what is already a fairly fractious relationship.

So, here are 10 things you may not have spotted from this year's Doctor Who Christmas special (watch it right now with your cable login), just so we're all aware of the more subtle references thrown in amid all the bickering:

As the Doctor and River Song have such a strange chronology, there were many hints about their various times together. But two particular comments stick out as being potentially confusing. When River refers to "the time when there were two of you," she's talking about the various comings and goings that happened in the mini-episodes "First Night" and "Last Night," in which she and the Doctor prepare for their first date, interrupted only by iterations of themselves from the future.

Then there's Jim the Fish. In "The Impossible Astronaut," River and the Doctor synchronize their diaries, referring to various unseen adventures, and referencing someone called Jim the Fish, who the Doctor claimed was "still building his dam."

While we've still not met this piscine chum, in the Doctor Who game "The Eternity Clock," there's an extract from River Song's diary, which contains the following detail of a night out with Jim and the Doctor:

"There was this one time - 48th century I think, in a bar run by the Brotherhood of Maldovar - my sweetheart took Jim and me out for karaoke. I don’t remember much, it was all a blur - but I do remember 'Islands in the Stream' and the video recorder. We lost the tape afterwards. Never even gave it a second’s thought, I don’t think.

"'Til today. We just unearthed a series of paintings on huge sandstone slabs. We’re not totally sure how they were formed - but that’s him - that’s Jim the Fish in that suit in that bar singing that song, gils flaring, teeth sparkling under the glitterball.

"Each tablet seems to represent a different line in the song. There are symbols, and Sssibeth says he’s seen something like them before. He read the words 'peace unknown,' 'tender love,' 'dedication'… We think these people built some sort of religion of love around the images. Oh, Jim! I'm just grateful that the parts of the video featuring me don’t seem to be represented, but we're still digging!" 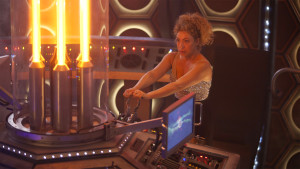 The first time River attempts to take off in the TARDIS, it doesn't work because Hydroflax's head is on board but his body is not, which causes the ship to make a variety of noises of protest. However, when River pilots the TARDIS to rescue the Doctor later on, it makes the common take off/landing noise we're all used to. Clearly she has grown to like the sound it makes when you fly with the handbrake on (see 10 greatest River Song moments in Gifs for details) after all.

More parts of the Doctor's anatomy appear to be ready for conflict. When asked by Nardole why he keeps crossing his arms, he replies "because they're cross. I've got cross arms." Which go very nicely with his attack eyebrows (from "Deep Breath"), no doubt.

River's stash of Aldebaran brandy in the TARDIS is not just a hidden delight for her, it's for fans of Douglas Adams and The Hitchhikers Guide to the Galaxy, in which Max Quordlepleen, the MC at the Restaurant at the End of the Universe, explains that once diners have watched reality implode, there will be nothing: "After this, there is void... emptiness... oblivion... absolute nothing... Except, of course, for the sweet trolley and our fine selection of Aldebaran liqueurs. And for once, ladies and gentlemen, there is no need to worry about having a hangover in the mornings, for there won't be no more mornings!" 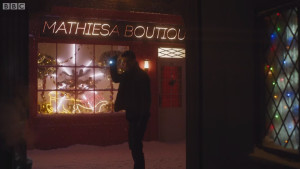 Did you notice the shop named Mathiesa Boutique, where the TARDIS was parked? It's very tempting to assume this was a nod to Doctor Who writer Jamie Mathieson, whose last writing credit for the show (shared with Steven Moffat) was "The Girl Who Died." Which would be a fitting summary of River's next big adventure. DO YOU SEE!? (etc).

The Doctor has always remained vague as to whether he is qualified as a medical professional or as an academic, or both. The First Doctor said on a few occasions that he wasn't medically qualified, while the Second Doctor claimed to have got his medical degree ("The Moonbase") under antiseptics pioneer Joseph Lister in Glasgow in 1888—which will have covered the very earliest days of vaccination, but predated such common medical practices as antibiotics by some decades—but later said he had no medical training at all ("The Krotons.") The Third, Fourth and Fifth Doctors claimed to be qualified in "practically everything" and the Eleventh Doctor claims to have two degrees, one in medicine and one in cheese-making ("The God Complex"). That said, when the Doctor is asked to provide medical support to a raptor-chewed Solomon in "Dinosaurs on a Spaceship," he makes a pretty good job of it. That still may not make him a surgeon, however. 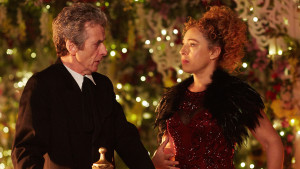 There's another Game of Thrones crossover in this episode, following the likes of Maisie Williams, Mark Gatiss, Harry Lloyd and David Bradley. The voice of Hydroflax's body comes from Nonso Anozie, who played the merchant Xaro Xhoan Daxos, prince of Quarth, and would-be suitor of Daenerys Targaryen.

The clue that this story would end up at the Singing Towers of Darillium was there right at the very beginning. The Doctor says to the hooded stranger with River Song's voice: "I've had a haircut and this is my best suit"...

...without quite remembering this quote from the first time they met (in "Forest of the Dead), River said: “The last time I saw you, you turned up on my doorstep with a new haircut and a suit. You took me to Darillium to see the Singing Towers. What a night that was; the towers sang, and you cried. You wouldn’t tell me why, but I suppose you knew it was my time. You even gave me your screwdriver - that should have been a clue.”

The relationship between Doctor Who and Stephen Fry goes a little deeper than the Doctor's claim that he was married to River Song (a complicated claim, given that he is currently happily married to Elliott Spencer). Stephen was asked to write a Doctor Who script during the Russell T Davies era, and he wrote a draft of a script based on the legend of Sir Gawain and the Green Knight. Sadly it never made it to the production stage as time and expense were both too tight.

NEXT: 10 Things You May Not Know About 'The Pilot'

Now go back and read the 10 Things You May Not Know About Doctor Who archive.