'Doctor Who': 10 Things You May Not Know About 'The Beast Below'

"The Beast Below" is in the fine tradition of Doctor Who stories that are designed to show how a new companion deals with life traveling with the Doctor. Some nurse a crush (Martha), others mess up so badly they're never invited back (Adam), but most commonly (Donna, Rose) there's a reckoning that takes place when it becomes clear that this miraculous Time Lord has his moral foibles like anyone else.

The key moment in this case is when Amy allows the Doctor to see that he's not the only generous alien who has put his life on the line to aid humanity, a perspective he'd be unlikely to spot without that fresh pair of eyes.

Speaking of which, here are some other things to keep an eye out for, the next time you watch:

As soon as she realizes she's in the distant future, Amy comments that she's no longer alive, saying, "I'm in the future. Like hundreds of years in the future. I've been dead for centuries." This echoes a similar comment Rose Tyler made about her mother in "The End of the World." In both cases, the Doctor's response is to mock his new companion for being maudlin. The Ninth Doctor tells Rose, "Bundle of laughs, you are" while the Eleventh responds with a similar "Oh, lovely. You're a cheery one."

The ship's elevators, or Vators, use the logo from the London Underground, and as a further nod, warn people to "mind the doors," a familiar warning to London tube travelers who are constantly told to "mind the gap" between the train and the platform. 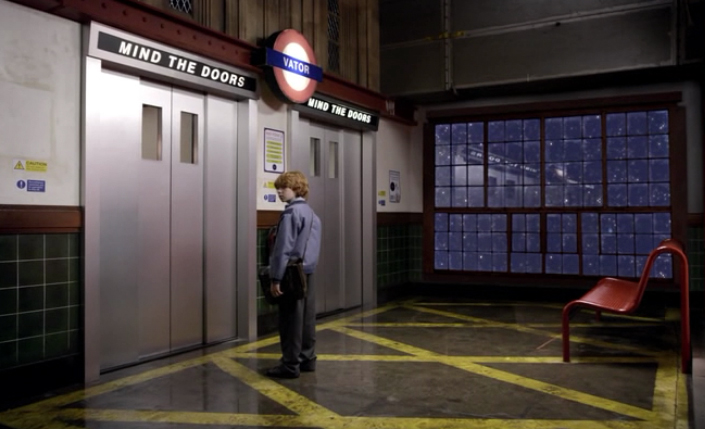 When Mandy says that Scotland wanted its own ship, Amy replies, "Nothing changes," which is a reference to Scottish calls for a referendum on independence from the rest of the U.K. Although this episode was broadcast in 2010 and the actual referendum wasn't until 2014, the pros and cons of Scottish independence were already being hotly debated across British media outlets.

The construction tent into which Amy crawls is directly outside a Magpie Electricals shop, which is, of course, the brand of electrical devices unique to the Whoniverse that first appeared in "The Idiot's Lantern." The Twelfth Doctor's guitar amp is also a Magpie.

The voice of Terrence Hardiman, who plays Hawthorne, should be very familar to fans of Big Finish audio productions. He also played Sitric Silkbeard in The Book of Kells, Hepworth Stackhouse in The English Way of Death and Reverend Dobbs in The Broken Crown.

There was a line — cut from broadcast — which revealed that Starship U.K. had ceased contact with the other ships in the fleet, claiming that the borders had been sealed off. Whether this means that the U.K. has become the sole human ship still in space, given that this is said to be the last Star Whale, is not stated.

The concept of humans leaving the Earth after it is threatened by solar flares has popped up in Doctor Who before. The Fourth Doctor came across Space Station Nerva ("The Ark In Space"), which was filled with humans in suspended animation, which was set up by humans 1,000 years from now in order to avoid a global catastrophe.

The Doctor's immediate obsession with water might seem odd at first, but it's not without precedent. As far back as the First Doctor story "The Ark" he was able to spot whether he was standing in a spaceship or not by the vibrations from the floor. This is clearly a very useful skill for a man who never quite knows where the TARDIS has taken him.

This is the second story in Season 4 in which characters attempt to puff themselves up using the construct "I'm [name]. Basically,..." In "The Eleventh Hour" the Doctor finishes his address to the Atraxi with the line "I'm the Doctor. Basically, run," and here Queen Liz 10 echoes this by telling the Doctor and Amy "I'm the bloody Queen, mate. Basically, I rule."

This is not the first time Sophie Okonedo appeared in Doctor Who. She was actually the voice of companion Alison Cheney in a 2003 BBC animated webcast called Scream of the Shalka, in which Richard E. Grant played the Doctor. Had Russell T Davies not been commissioned to resurrect Doctor Who for television in 2004/5, it's likely this is the version of Doctor we'd be referring to as the Ninth Doctor now, with Alison as his Rose Tyler.

NEXT: 10 Things You May Not Know About ‘Victory of the Daleks’