For the most part, “Spyfall” takes its tone (and punning title) from the James Bond franchise, but there’s a bit at the end that sort of overshadows everything else. It’s fair to say there are spoilers here, so do not read on if you haven’t seen this episode.

If you have, here are a few things to keep an eye out for, the next time you watch:

1. This part of the story is dedicated to former Doctor Who script editor Terrance Dicks, who passed away in 2019. As well as working on some of the most iconic stories of the Third Doctor’s tenure, and writing many of the original run of Target novelizations of Doctor Who stories, and even penning the show’s first insider biography, Dicks co-created the Master characterr. He’s remains one of the most supportive and prolific writers to ever work on Doctor Who and is remembered with awe by Whovians of every generation.

2. The Doctor is seen fixing her TARDIS in an MOT center. The MOT test (stands for Ministry of Transport) is a mandatory certificate all cars have to pass in order to be allowed on British roads.

3. There are not one but two guest comedians in this episode. Sir Lenny Henry (playing Daniel Barton) is a hugely familiar face to British TV viewers, as a stand-up comic, sketch comedian and dramatic actor. He also played a pioneering role in the BBC Red Nose Day telethons for Comic Relief.

And, in 1986, around the time of the Sixth Doctor, he appeared in the following Doctor Who skit:

He is, therefore, the first black actor to play the Doctor (albeit non-canonically).

4. To achieve the lighting effect of a roomful of people being being taken over by their phones, Ed Moore, the director of photography, first tried having a video that everyone could play on their prop phones over Wi-Fi, which would give a big white flash. As it turned out, streaming issues meant that the cast had to download the video individually and all press play at the same time, because they couldn’t sync the brightness correctly.

5. If you have a nagging suspicion that you recognize the voice of the doctor that administer’s Graham’s checkup, it might be because Andrew Bone has played several roles for Big Finish Productions. He was the Vice Chancellor in “The Rani Elite,” Alfred Woodrow in “The English Way of Death,” and both Pan Vexel and Nebrin in “Domain of the Voord” — so many cameos!

6. The second comedian is the multi-talented Stephen Fry as C, the gruff head of MI6. Stephen is well known to the Doctor Who universe, having submitted a script to Russell T Davies during the Tenth Doctor’s tenure (he was too busy to make the required alterations and the story’s slot was replaced by “Fear Her”). He also provided the voice of the Minister of Chance in the webcast “Death Comes to Time”.

As if that wasn’t enough, he is also one of the few actors who have appeared in the show to be named within the show itself, as he was cited as one of River Song’s previous conquests in “The Husbands of River Song”.

7. In an interesting side-note, one of Stephen’s most fondly remembered sketch characters was also the head of the secret services. In A Bit of Fry and Laurie, he played Control in a series of heroically un-dramatic skits undercutting the self-important air of both James Bond and the paranoid, darker world of John Le Carré's Tinker Tailer Soldier Spy:

Whether this means that C’s colleague Tony Murchison (played by Hugh Laurie) is now canon remains to be seen.

8. Oh, and while it might seem as if the name C is just a nod to that sketch, taking the format of such James Bond-style codenames as M and Q, it’s based on fact. The Chief of the Secret Intelligence Service is traditionally referred to as C in real life.

9. In keeping with the Bond homage at the heart of the episode, camera assistant Gwilym Jenner put this image on his clapperboard during filming: 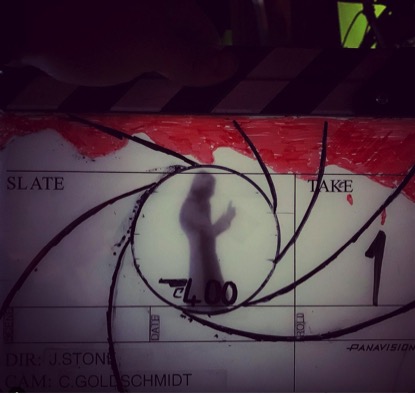 10. OK, this is the bit with the real spoilers. After both parts of this story aired, Sacha Dhawan took to Instagram to reveal the awkward circumstances around being told he’d got the part. He was rehearsing for a play in January 2019 when the call came in saying he’d be cast as O, and that O was the code-name for the Master. His agent was effusive, “You know, Time-Lord, nemesis, Jodie, Master, the Master. The. Master… oh and you start filming in South Africa next week.”

Having been sworn to secrecy, there was no way he could reveal his excitement to the cast of the play: “I don’t jump up and down. I don’t run the length of the corridor, in fact I solemnly walk back to the rehearsal room, my heart beating faster and faster…”

His anxiety and stress at such momentous news was only made worse by the fact that one of the actors in that rehearsal room, in fact the actor he most wanted to talk to at that moment about the new job he had just secured, was Peter Capaldi.