'Doctor Who': 10 Things You May Not Know About 'Rise of the Cybermen'

Having delivered the a classic villain (the Daleks) back to Doctor Who in the fifth story of the relaunched show's first season, "Rise of the Cybermen" does the same thing in Season 2, only with a twist. They're not upgraded versions of the former citizens of Mondas, these Cyberfolk came from another universe entirely, and therefore their origin tale is one that chimes with modern fears about information overload, control of the media, loss of privacy and where these things are taking us. It also introduced two new catchphrases for Cyberkind, "delete" and "upgrade."

Here are a few other things that you should keep an eye out for, the next time you watch.

The inspiration for the parallel world narrative in this story comes from two key sources. The Third Doctor adventure "Inferno" takes place in a parallel universe, putting (among other things) the Brigadier in an eyepatch. Then there was the Big Finish Fifth Doctor audio production "Spare Parts," written by Marc Platt (as credited at the end of the episode).

Writer Tom MacRae points out that while there are overlapping themes in the story—which explores how the citizens of the planet Mondas (a sister to Earth) elected to replace their bodies with cybernetic parts—it wasn't simply a matter of converting one script into another: "My story isn't the same—it's got a different setting, different themes, and different characters, 'cause once we started talking, the whole thing developed in a very different direction. But as Russell says, we wouldn't have started this whole line of thinking if he hadn't heard 'Spare Parts' in the first place."

Ironically, just before taking up the role as John Lumic—a part that required him to sit in a wheelchair for the duration of the shoot—Roger Lloyd-Pack broke his ankle, which affected his ability to act the part in no way whatsoever.

There's a double crossover between new and classic Doctor Who in this episode. Colin Spaull, who plays Mr. Crane, Lumic's man on the ground, played the role of Lilt in "Revelation of the Daleks," which was directed by Graeme Harper. Graeme also directed classic Who serials "The Caves of Androzani" and "Warriors' Gate" and returned to the new series to direct this, "The Age of Steel" and a good deal more of David Tennant's stories, including "Army of Ghosts", "Doomsday", "Planet of the Ood" and "Turn Left."

When Mr. Crane is looking for the right song to play to cover up the sound of homeless people being cut up and converted into Cybermen, he chooses a version of the doo-wop hit "The Lion Sleeps Tonight" by the Tokens. Originally entitled "Mbube," with Zulu lyrics, it's a song with a long pedigree and proud heritage, having first been written and recorded in South Africa in 1939 by Solomon Linda with the Evening Birds. Over the years, subsequent interpretations have gone under the title of "Wimoweh," "Wimba Way" or "Awimbawe", and after the Tokens had their hit version, it was covered by everyone from the Weavers to R.E.M. Fittingly, the version Mr. Crane likes is a 1981 British No. 1 for Tight Fit, in which this very organic piece of music, a hymn to nature, has been given an electronic underbelly:

In Tom MacRae's original script there were more Preachers (the gang of outsiders opposing Lumic Industries, including Ricky Smith) including a tough soldier named Esme. This character was still on the slate as actors began to audition for roles and one of the people who read for the part was Freema Agyeman, soon to return as Martha Jones.

There's a curious moment as the Doctor and Rose first discover that the Cybus earpieces have the power to root people to the spot. Just after Rose says, "What are they all doing?" a fellow in a blue suit in the right of the screen can be seen to blink. It's not made clear whether this is something he should not be able to do, given his immobile status.

The logo for Cybus Industries (as first seen on Rose's phone) has the same Cyberman's eye design as 3W, the company run by Missy in the Twelfth Doctor story "Dark Water." Some fans have noted that this big circle/little circle idea has cropped up a few times in recent Doctor Who episodes, including "Mummy on the Orient Express," "Time Heist" and even the solar flare seen in "In the Forest of the Night." 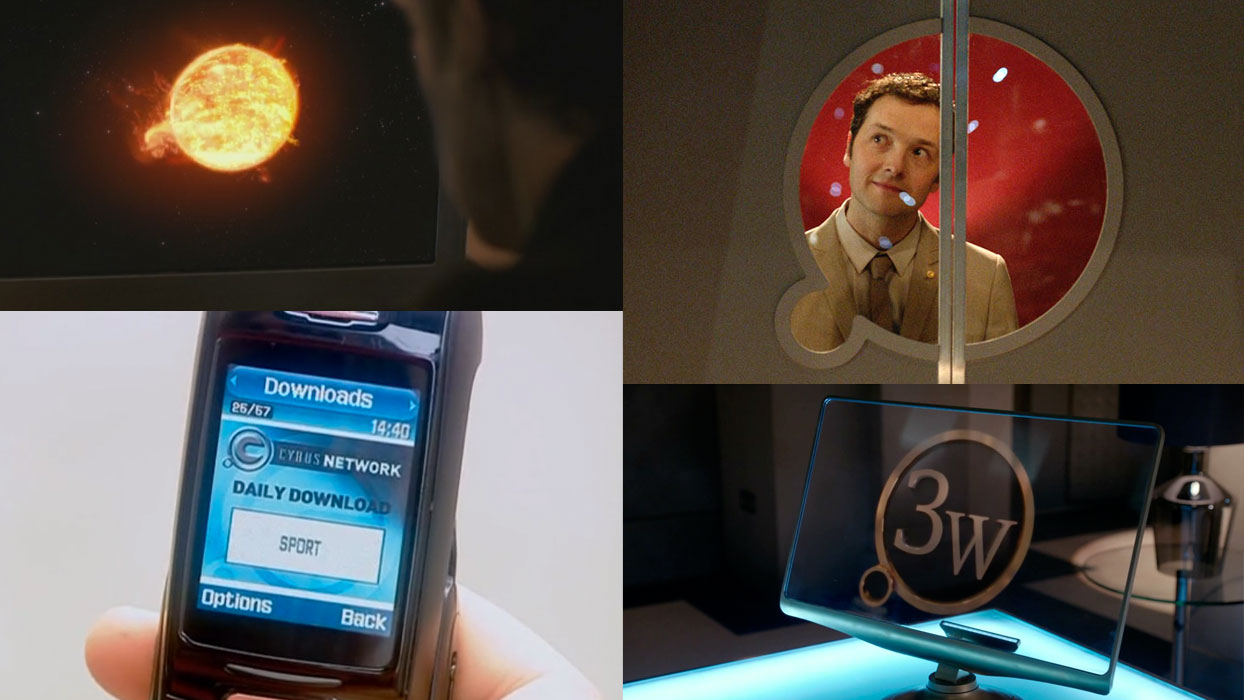 There's a subtle reference to a point made more explicitly as part of the finale of the next season of Doctor Who. After the TARDIS crash lands, six gas masks fall from the ceiling, in the manner of the oxygen masks on an airplane. This implies there should be six pilots at the TARDIS console, which the Doctor confirms while dragging the Earth back to its original position towards the end of "Journey's End."

The lorries that come to lure homeless people to be taken away for upgrading are marked with the name International Electromatics, which is a reference to the company that provides a front for the Cybermen in the 1968 Second Doctor serial "The Invasion."

During the party, Rose jealously describes the Doctor's informant Lucy as "a bit thick," an item of British slang that might need a moment of unpicking. Thick is used in this instance as a contraction of "thick-witted," as in this line from Shakespeare's Henry IV, Part. 2, 1600: "Hang him baboon, his wit's as thicke as Tewksbury mustard."

There's also the more recent variant whereby someone is described as being "as thick as two short planks," or even the Doctor's elaborate play with the term from "The Girl in the Fireplace": "You are the best, you know why? Cause you're so thick! You're mister thick thickity thick face from thicktown thickania. And so is your Dad!"

NEXT: 10 Things You May Not Know About ‘The Age of Steel’