The Doctor is in prison, and has been for a long time. Meanwhile, the Daleks are doing what they always do, finding a way to not only persevere and survive, but take over their immediate surroundings by any means necessary. Also, humans are using Dalek ideas to try to reinforce the Police, and there are signs of strain amid members of the Doctor’s Fam.

“Revolution of the Daleks” is a story that explores issues of social unrest, state control, and even racial purity with a lot of running about and shouting, and what’s more, Captain Jack is back.

1. This episode features the presence of thespian royalty – Dame Harriet Walter. She’s a Tony award-winning stage and screen actress famous for roles in Downton Abbey (in which she played Lady Prudence Shackleton), Succession (as Lady Caroline Collingwood) and The Crown (Clementine Churchill). Such is the glory of her achievements that it’s worth noting that all of those roles occurred after she was appointed Dame Commander of the Order of the British Empire (in 2011) for services to drama.

2. She is also firmly established as a card-carrying member of the Whoniverse, having played Beatrice Mapp in the Big Finish audio drama “The Boy That Time Forgot.” British drama being as small a world as it is, she’s worked with lots of Doctor Who actors too, having appeared alongside Jodie Whittaker in the mini-series The Assets, and starred in Law & Order UK with Freema Agyeman, Bradley Walsh and Peter Davison. Even her husband has a Doctor Who credit – Guy Paul played Joe Lynwood in the Big Finish Missy audio drama “The Broken Clock.”

3. In order to create the disturbance of the TARDIS materializing in Graham’s front room, the crew had to use leaf blowers, which lead to some behind the scenes mucking about from Bradley Walsh and Tosin Cole. Keep your eyes peeled for the paper mask on Graham:

4. As well as providing a crossover between Downton Abbey and Doctor Who, this episode nods explicitly to two other huge science-fiction and fantasy brands. The first is right at the beginning, where the credits read “A LONG TIME AGO… FAR, FAR AWAY” as a nod to the opening title from Star Wars, which has “in a galaxy” where that ellipsis sits.

6. Robertson’s TV interview at the end of the story is with Emily Maitlis, the actual presenter of the BBC news program Newsnight. Her cameo appearance is uncredited, but she joins a long list of BBC news journalists who have appeared as themselves in the show, including Nicholas Witchell, Huw Edwards, Lizo Mzumba, Kirsty Wark, Andrew Marr, Kenneth Kendall and Angela Rippon.

7. The showdown between the Dalek factions was filmed on the Clifton Suspension Bridge in Bristol in October 2019. To mask proceedings, local road users were told the bridge was closed for repair, but it wasn’t long before people started to spot those familiar shapes trundling over the tarmac, putting up snaps on social media.

Operator Jon Davey showed them in action from his Instagram feed: 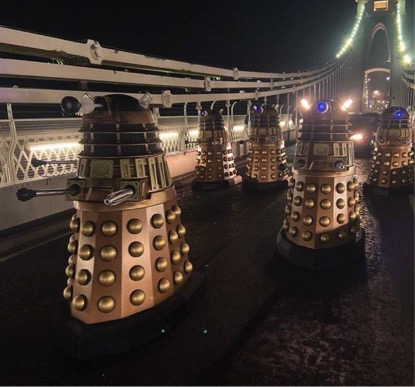 8. Eagle-eared Dalek-listeners claim that Robertson’s defense drones have the same voices as the Imperial Daleks from the Seventh Doctor adventure “Remembrance of the Daleks.” If deliberate, this is a brilliant piece of fan service, as that was the last time we saw a large-scale civil war between Dalek factions on TV.

9. That said, Daleks have always maintained a firm stance on racial purity – as befits a race invented (by Terry Nation) as a science-fiction echo of the horrors of the Nazis. The Eighth Doctor came across a mutant strain of Skaronians in the audio drama “Blood of the Daleks,” and that didn’t end well; the Eleventh Doctor’s experience with the Ironside Daleks (“Victory of the Daleks”) also ended in their extermination. And, perhaps in the greatest example of their twisted thinking, the Dalek survivor of the Time War discovered by the Ninth Doctor (“Dalek”) killed itself once it realized it was no longer pure.

10. Robertson’s line “You know what your problem is, Leo? You're too clever. This is why people don't like experts” is a direct reference to a recent event in British politics. During the Brexit referendum of 2016, against mounting evidence from Remain-supporting scientists and legal experts that a departure from the European Union would harm the British economy, Leave campaigner Michael Gove MP said, “I think the people of this country have had enough of experts.” This was a hotly contested point of populist politics – never mind the facts, what about my feelings? – which served only to entrench opinions along both sides of the debate.

Do you have a favorite moment from "Revolution of the Daleks"?