‘Doctor Who’: 10 Things You May Not Know About ‘Resolution’

The wonderful thing about “Resolution” as a story is it gives the Daleks their ick factor back. Not only is the Dalek portrayed without its protective tank, it even starts the story effectively dead, and yet by about halfway through it is as terrifying a monster as it ever was.

By showing their capabilities as direct manipulators of human minds, the story proves the adage that a lot of Daleks is scary, whereas a single Dalek in close proximity is horrific.

1. The fact that the monster in this story is a Dalek was kept a closely guarded secret. So secret, in fact, that Nick Briggs — the celebrated voice of the Daleks in modern Doctor Who — did not know his services would be required, particularly after Chris Chibnall had revealed to the press that the Thirteenth Doctor’s first season would contain no returning adversaries.

But as Nick told Doctor Who TV, things took a conspiratorial twist with an invitation from Chris: “He invited me round for a cuppa and a bakewell tart — I supplied the bakewells, by the way! — I just thought we were going to have a chat and a catch-up as we’d done on previous occasions when we’d been out to lunch or bumped into each other. You could have knocked me down with a feather when he presented me with a Non-Disclosure-Agreement, asked me to sign it and, with a big grin on his face, asked me to come back and do the Dalek voice. It was magical, especially when he related the story to me.”

2. It’s not often clear when a new item of Dalek weaponry enters canon, but suffice to say those missiles hiding behind the orbs of the Dalek ‘skirt’ are new, as is the idea of the Dalek Reconnaissance scout. The claw replacing the classic “plunger” arm has appeared before, however.

3. You may recognize the voice of Connor Calland, who played Richard. He has (to date) appeared in Doctor Who audio adventures, playing Blue in The Seventh Doctor: The New Adventures story “Vanguard,” he was Grimble in The Sins of Captain John audio story “Escape from Nebazz” and he was David in the God Among Us story “See No Evil.”

4. Unlike other Daleks in Doctor Who history, the Dalek tank we see in this episode does not have a human inside the casing. It’s a fully remote controlled robotic device, requiring separate operatives for its eyestalk, arms and lights. Darren Fereday, concept artist, tweeted that it took a lot of coordinated work to get right: 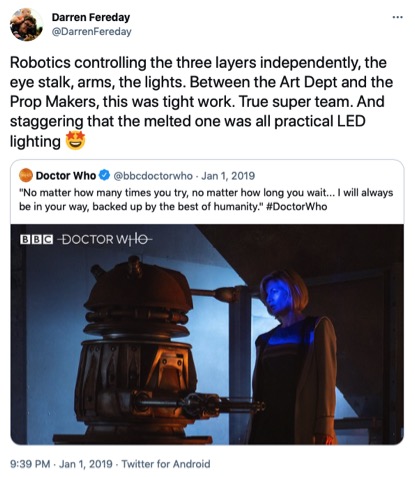 5. And while we’re on production details, the sound of the Dalek gunfire used in this story comes from the Seventh Doctor episode “Remembrance of the Daleks.”

6. If you’re not sure where you’ve seen Nikesh Patel — who plays Mitch — before, check out Mindy Kaling’s 2019 adaptation of Four Weddings and a Funeral as a miniseries for Hulu. He plays Kash Khan. He’s also one of the co-stars of the 2020 fantasy movie Artemis Fowl, based on the hugely popular young adult novels by Eoin Colfer.

7. Nick Briggs also told Doctor Who TV that he was quite deliberate about how the voice of that Dalek would sound, out of the shell: “I knew the ‘internal’ voice of the Dalek should be very intense and close."

Elaborating, Briggs explained, “In the first squid-on-back scene, the audience don’t know it’s a Dalek. So I wanted it to be ambiguous. But I also thought it would sound different, because it wasn’t coming out of a speaker in the metal Dalek. This was the voice of its mind. So I got so close to the microphone that my lips were brushing the pop shield and spoke really quietly, but with a huge, insane intensity. It’s a real psycho. So much rage stored up since the 9th century. Then, they pulled back the ring modulation in the mix, so you heard more of my raw voice."

He continued, “I also wanted to make this one super-arrogant. It’s been bottling all this rage up for hundreds of years, then it finally gets a chance to reclaim its horrible ‘glory’”.

8. The story opens with the Reconnaissance Dalek being defeated by armies putting aside their rivalries and working together against a common foe. This is a theme that goes all the way back into classic Doctor Who. In “Frontier in Space,” the Third Doctor finds out that the Draconians have joined forces with humanity to face the Daleks, and in “Genesis of the Daleks,” the Fourth Doctor predicts that, “some things could be better with the Daleks. Many future worlds will become allies just because of their fear of the Daleks.”

9. This episode’s guest comedian is also the story’s chief protagonist. Charlotte Richie is well known to British TV audiences, having appeared in the supernaturally funny BBC hit show Ghosts, the BBC comedy Siblings, and her mid-2010s run as a cast regular on Call the Midwife.

Two other notable things about Richie are that when she was filming her TV breakthrough role, in the acclaimed Channel 4 student comedy drama Fresh Meat, she was an actual student, finishing her degree in English and Drama at Bristol University. The other is that she appeared as an unlisted extra in Harry Potter and the Goblet of Fire, should you be handy with a magnifying glass and the pause button.

10. To further keep the identity of the show’s monster a secret, the scripts all contained a secret code name. The deliberately drab “Kevin.”

Nikesh told Twitter that it was such a good ruse, it worked on him too: 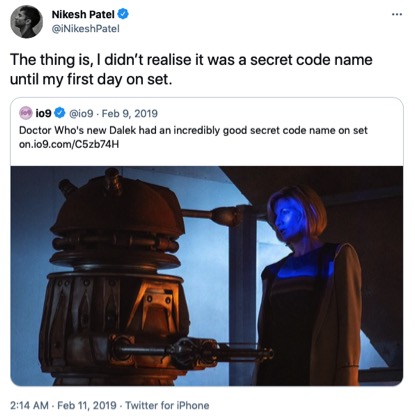 Across a series of tweets, he added: “I’m sent the script. I get to join the Doctor on the TARDIS? And battle a great evil?! Yes! The name of this great evil? KEVIN. All over the script."

“’That’s odd’ I think. I’m sure someone at some point will explain something that I’ve missed and it’ll all make sense. CUT TO: My first day on set. I meet the cast for the first time. They’re all lovely. We kick off with a line run. It’s the scene where the Doctor confronts the projection of Lin on the TARDIS."

“We run our lines, and Jodie keeps the code name, thinking it sounds hilarious. It does! Unless you’re me, in which case you hear the Doctor — with gusto — deliver the killer line ‘I’m coming for you, KEVIN!’ and start to wonder if you’re missing something. At this point I think: I’m in too deep. We’re really doing this."

“It’s only after the line run, before we start blocking the scene, that I go to talk to Wayne [Yip, director] and he says ‘you know that KEVIN is a Dalek, right? They’re keeping it super secret.’"

“And that’s how I came to believe that the most dangerous creature in the universe... was a squid called Kevin. Sometimes secret code names can be *too* effective.”

Did you find yourself terrified of 'Kevin' in "Resolution"?!