“Orphan 55” wears its social conscience on its sleeve. You can read it as a critique of capitalism, a stark warning about climate change and/or a parable about the ever-changing nature of evolution.

It is also a story about not leaving things to the last minute, in which two fractured families are healed by their experiences fighting off the Dregs and in which one couple pay the ultimate price.

2. This episode’s guest comedian is James Buckley, best known for his unrepeatable turn as the cocksure Jay in the sitcom The Inbetweeners. When asked by DoctorWho.tv about his decision to take on the part of the bumbling mechanic Nevi, he replied that he was partly inspired by the strength of the Doctor Who fandom: “It’s really an honor. The viewers who watch it and how passionate the fans behind the show are is one of the reasons I wanted to do it. I want to be involved in things that people support like they do a sports team, where something is so loved by so many people. Really huge fans, taking the word ‘fan’ back to its actual meaning – fanatical.”

3. We are treated to some very choice British slang moments, and for once it’s not just Graham spouting off. Yaz describes the Doctor as being in a “mardy mood,” a mostly affectionate term which means the same as moody. It’s a term that is very much associated with Sheffield, especially since Arctic Monkeys released their celebrated song of love gone awry, “Mardy Bum,” in 2006.

4. Not that Graham is entirely unrepresented in the slang area. His delight at scoring a free holiday is expressed most fully with a thrilled “get in!” This is a celebratory expletive with a wealth of potential uses. It’s likely to have derived from sport – think of a soccer ball heading into a goal – although the OED can find citations that link the term with success from as far back as 1350. Chambers Slang Dictionary noting ''get in there!'' as being a general explosion of delight in the 1920s, most notably aimed at a young man’s friends who have watched him succeed in getting a date.

5. Designs for the Dregs went through a series of iterations, as revealed by designer Javier Aliaga in an Instagram post. The original model for the Alpha Dreg reveals a more flayed, leathery look that is less sinewy, with an extensively remodeled head and face, and with purple veins instead of the bloody redness. 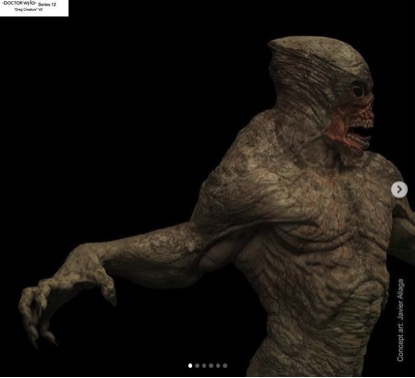 6. The story was filmed in Tenerife, which is apt given that it is such a popular holiday destination, especially with British tourists. To get the landscape of a climate-destroyed planet, the crew set up on the slopes of Mount Teide, an active volcano.

7. The story’s other big moment of interstellar casting comes with Laura Fraser, star of Breaking Bad, Better Call Saul and a host of top notch British TV dramas (The Missing, Lip Service, Neverwhere – also starring Peter Capaldi). Of course, the role she had which is probably of most note to Whovians is her part as the Henriette, David Tennant’s unrequited love in Casanova. 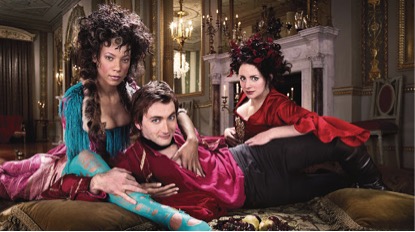 8. The Doctor does seem to be particularly adept at discovering upsetting potential future timelines for the Earth. The Third Doctor discovered an alternate future in which the Daleks invaded the planet (“Day of the Daleks”). The Fourth Doctor revealed a version of 1980 – in the very near future at that point – in which the Earth became a dead planet (“Pyramids of Mars”). The Sixth Doctor discovered a ruined planet as a future version of our home, which had been moved by the Time Lords and renamed Ravolox (“The Mysterious Planet”). The Seventh Doctor met the haemovores, who evolved after the Earth was overwhelmed by pollution. Then there’s the Earth the Tenth Doctor and Martha discovered when Captain Jack Harkness jumped aboard the disappearing TARDIS, the dystopia at the end of the universe (“The Sound of Drums”).

9. This is definitely going to stick in the mind next time you watch. The Dreg costumes left so little chance for the performers inside to breathe, that fresh air had to be pumped into the mask in between shops, as director of photography Ed Moore revealed in an Instagram post.

He said: “Although they are obviously apex predators your average Dreg does struggle a bit for fresh air — fortunately the costume dept is on hand with a little battery powered blower to keep them going...”

10. We are treated to an uncelebrated Doctor Who catchphrase in this episode. The sentence “When I say run, run” was a particular favorite of the Second Doctor’s, but it has cropped up a few times over the years, in “Castrovalva,” “Sleep No More,” and “Kill the Moon.” As you may expect, it appears a lot in this supercut: