'Doctor Who': 10 Things You May Not Know About 'Last Christmas'

And this is a perfect opportunity to have a dig about behind the most recent spesh for some facts and arcane references, so you'll be fully ready by the time it hits your TV screen.

But before we get into the facts, you may wish to re-familiarize yourself with the story or watch the episode right now on BBCAMERICA.com:

One of the reasons the Doctor may be quite so unfriendly towards Santa when he arrives is that he does rather like to put it about that he actually IS Father Christmas, as in this exchange from "The Doctor Dances":

Rose Tyler: “Look at you, beaming away like you’re Father Christmas.”

The Ninth Doctor: “Who says I’m not? Red bicycle when you were 12!”

...or at the very least that Santa is a close personal friend, as mentioned in "A Christmas Carol":

Boy: “There’s no such person as Father Christmas.”

The Eleventh Doctor: “Oh, yeah? Me and Father Christmas, Frank Sinatra’s hunting lodge, 1952. See him at the back with the blonde? Albert Einstein. The three of us together. Brrm. Watch out. Okay? Keep the faith. Stay off the naughty list.”

To distract her from the Dream Crabs, Shona dances to the song "Merry Xmas Everybody" by Slade, which is one of the most popular festive songs in British culture, hence the line "Here comes your earworm." It has appeared three times in past Doctor Who episodes: In the garage where Mickey works ("The Christmas Invasion"), at Donna Noble's wedding reception ("The Runaway Bride") and as background music ("Turn Left," "The Power of Three").

One of the original plans was for the scenes with an aged Clara to be her final moments with the Doctor, in an echo of Clara's encounter with an aged Eleventh Doctor a year previously. Jenna Coleman had considered leaving the show at the end of Season Eight, then opted to stay on for the Christmas special, then stayed on for Season Nine, prompting a few re-written scripts, as Steven Moffat confirmed shortly before Clara died in "Face the Raven":

"She left several times. I wrote her out in 'Death In Heaven' at the end of episode 12 last year. All that was meant to be the last time we saw her. And then at the last minute she said she'd like to do Christmas, which I'd already half written so I had to reverse rapidly and write it again with Clara in it and then write her out at the end of that episode." 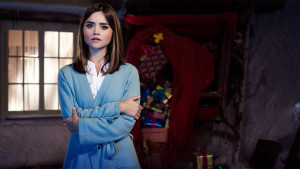 During her final scene as an old woman, Clara tells the Doctor that she learned to fly a plane during the years they were apart. This is a reference to this moment in "The Bells of Saint John" when the Eleventh Doctor and Clara find themselves aboard a crashing airplane:

Doctor: "I'm the Doctor. I'm an alien from outer space. I'm a thousand years old, I've got two hearts and I can't fly a plane! Can you?"

There are two moments of casting in this story that provide particular excitement for Whovians. One is Dan Starkey (who normally plays the Sontaran Strax) appearing with his real face out as an elf, and the other is Michael Troughton, brother of David (Professor Winifold Hobbes in "Midnight") and son of Patrick (the Second Doctor). 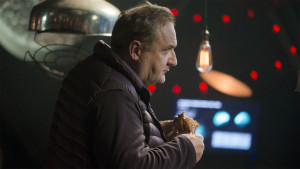 There was also a plan to bring the Doctor's robot dog K-9 back in "Last Christmas." It would have been a special festive gift for fans of the classic series, one that would not require extra plotting to either destroy K-9 or keep him involved in every subsequent story, as it's all a dream after all. Steven Moffat explained to TV & Satellite Week: "I had a whole scene where the Doctor was pointing out how ludicrous Santa Claus is, having a reindeer with a glowing nose and so on... and then in comes K-9. Completely daft, but he's brilliant. I'm totally up for K-9 when we have the right idea."

When the Doctor wakes from his own Dream Crab attack and heads off to Clara's house, it should be taken as a clue as to whether he is truly free of infestation that he is in the an underground volcano cave very similar to the one that Clara went to when she destroyed the Doctor's TARDIS keys in "Dark Water." As we know, that didn't really happen either. 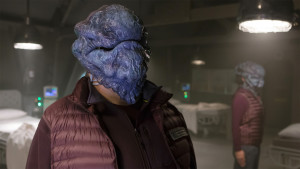 After the Doctor attempts to leave the base, and then goes back in upon realizing he has missed "the obvious," he insists that no one salute him. This is a callback that goes back over 40 years. The Third Doctor in particular had a thing about not being saluted by military personnel.

The Helman-Ziegler test, described by the Doctor as "the only reliable dream test that I know," is not a real thing. However, there is genuinely a way for people to communicate with reality from within their dreams. In 1978, Keith Hearne of the University of Hull found that people who have very lucid dreams could control the movement of their real eyeballs from within a dream, following a set pattern to make them move while the rest of the body is fast asleep.

And finally, lets hear it for the humble tangerine (or satsuma, if you'd rather). These are a common Christmas gift in Britain, usually discovered down at the toe end of your Christmas stocking, making children feel like there's an extra exciting present they may have missed, and slightly disappointed to discover it's actually an item of fruit. This is what the Doctor means when he says, "No one likes the tangerines."

However, the Tenth Doctor did use a satsuma to save the day after he had bested the Sycorax leader in armed combat in "The Christmas Invasion." As he is about to be attacked from behind, the Doctor finds a satsuma in his dressing gown pocket and lobs it at a nearby button, opening a trap door under the Sycorax leader and casting him to his death:

NEXT: 10 Things You May Not Know About ‘The Magician’s Apprentice’