'Doctor Who': 10 Things You May Not Know About 'Doomsday'

For all that it's a ripping yarn about Daleks fighting Cybermen across modern-day London, with recurring and beloved characters making a return journey and some sharp comic moments (particularly between those bickering alien races), "Doomsday" is mostly associated with one key scene, often considered the most wrenching and emotional scene in the program's long history; the first goodbye between the Doctor and Rose Tyler.

But before we get to that, here are a few things that you should keep an eye out for, the next time you watch.

Russell T Davies concocted the idea for the Genesis Ark because he needed a reason for the Daleks not to immediately kill Rose and Mickey. But having created a device that required time travelers to set it off, and sent the Daleks to modern-day London to await the Doctor's appearance, this aspect of the story was played down, so that the deaths of so many humans didn't overwhelm the Doctor with guilt just as he was working out that, in order to destroy the Daleks and Cybermen, he'd have to say goodbye to Rose.

When Rose is rescued from the Void at the last minute, there was some debate among the production team as to who should flip realities and grab her. Russell T Davies and executive producer Julie Gardner lobbied for Pete Tyler, especially as he'd been somewhat sniffy about Rose being 'his' daughter earlier in the story, but producer Phil Collinson suggested it should be Mickey, a point also supported (understandably) by Noel Clarke.

The moment where Jake appears at the base of Torchwood Tower, suggesting the Doctor and team take the elevator instead of climbing all the stairs to the top, was actually born of budgetary necessity. The original script called for the Doctor and Rose to fly up in the Jathaa Sun Glider mentioned in "Army Of Ghosts," but the effects budget would not stretch to it.

The Cyberleader is played by Paul Kasey, who is one of the most frequent visitors to the Doctor Who set, appearing more times than some of the Doctor's companions. Not counting his appearances in both Torchwood and The Sarah Jane Adventures, he has been (deep breath) an Auton, a Clockwork Droid, an Ood, a Hoix, the Judoon captain, the Wooden Queen, a Time Zombie, a Whisper Man, a Pig Slave, a Zygon, Jocrassa Fel-Fotch Passameer-Day Slitheen and Sip Fel-Fotch Passameer-Day Slitheen, and he was Nephew in "The Doctor's Wife."

The script did not call for any physical differentiation between the four Daleks in the cult of Skaro, but when production designer Edward Thomas suggested that Dalek Sec should appear in black—a color denoting a superior rank that dates back to classic Doctor Who stories such as "The Dalek Invasion of Earth," "The Daleks' Master Plan" and "Resurrection of the Daleks"—the decision was taken to give the Cybermen their colored livery too. So the "handles" of the helmet of the Cyberleader are also black, which is how it was done in the original Doctor Who series too ("Earthshock," "Attack of the Cybermen").

Similarly, each of the four Dalek members of the Cult of Skaro have their own insignia under their eyepiece. Each one takes the design of a rectangle connected to a small square (see Dalek Sec below), and with dashes on the inside left of the rectangle. All of the Cult of Skaro Daleks bar Jast can be distinguished by which of their dashes is the longest. Jast has no dashes. 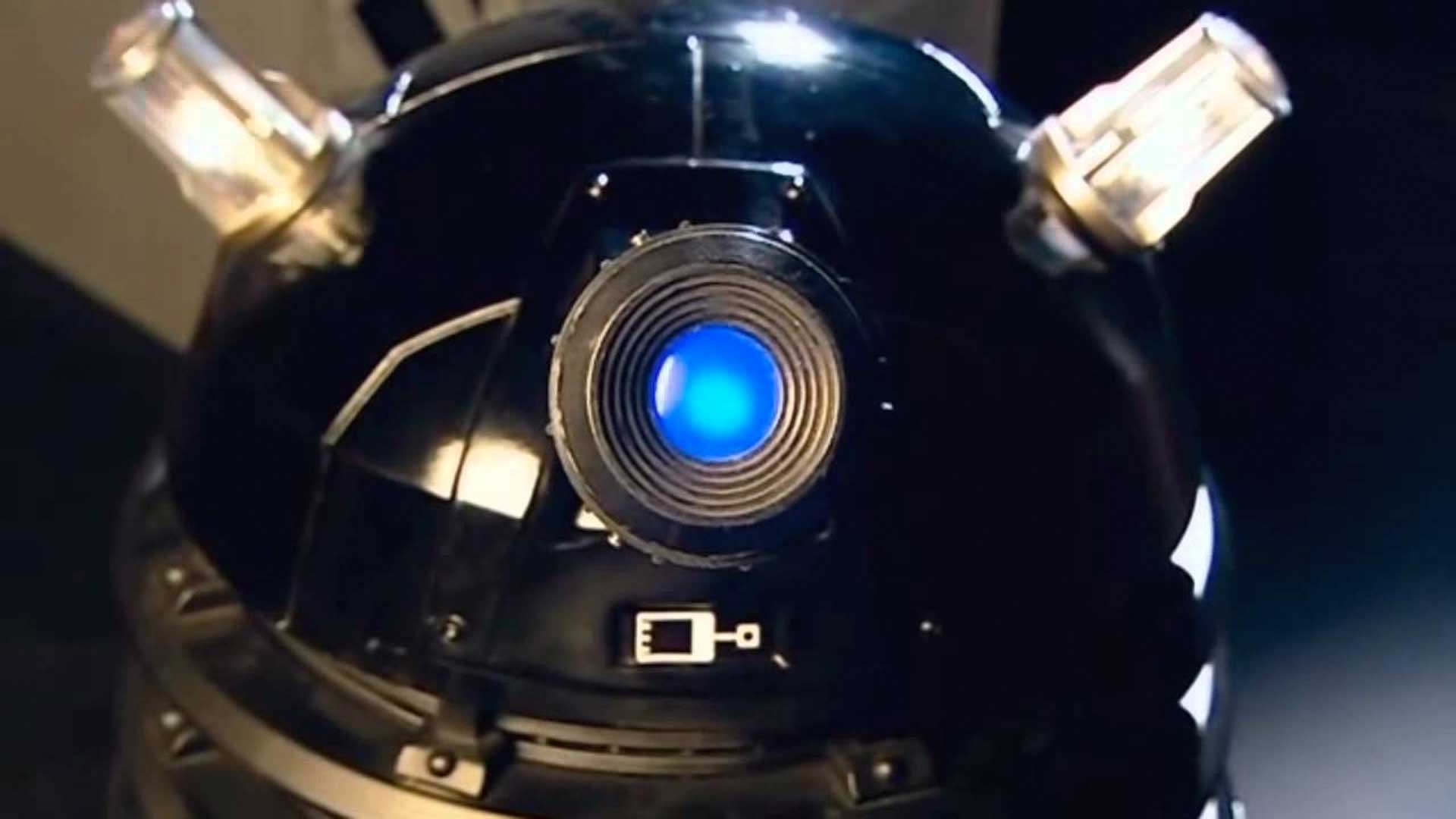 As Mickey and Rose watch the Daleks and Cybermen bicker, Mickey observes, "It’s like Stephen Hawkins meets the Speaking Clock." Leaving aside the fact that he got Professor Hawking's name wrong (which, of course, Mickey WOULD), the Speaking Clock is an automated teleophone service offered by British Telecom for people to find out the precise time. It started in 1936 and continues to this day.

And finally, the Doctor refers to the dynamic duo of himself and Rose by three names—"Hope and Glory, Mutt and Jeff, Shiver and Shake"—and they all need a little unpacking:

"Hope and Glory" refers to "March No.1 in D," from Edward Elgar's Pomp and Circumstance Marches, a section of which contains the melody that was used as the basis for the patriotic British song "Land of Hope and Glory," traditionally played with great ceremony and audience participation at the Last Night of the Proms, a classical music festival based in London's Royal Albert Hall.

"Mutt and Jeff" is Cockney rhyming slang for being hearing-impaired, where Mutt and Jeff = deaf.

"Shiver and Shake" is the title of a British children's comic magazine from the early 1970s, featuring many different comic strips loosely arranged around the theme of horror movies. Recurring characters included Frankie Stein, Ghouldilocks and Moaner Lisa. The duality in the title came from the idea that these were two comics in one. Shiver was hosted by a ghost of the same name from a strip called "The Duke's Spook," while Shake was an elephant. Quite why the Doctor would insist "Oh I'm Shake" is known only to him.

Oh, and before you go... as promised, here's that goodbye in full. Hankies at the ready?

NEXT: 10 Things You May Not Know About ‘The Runaway Bride’