‘Doctor Who’: 10 Things You May Not Know About ‘Demons of the Punjab’

"Demons of the Punjab" is one of the gems of Jodie Whittaker's first season of Doctor Who. A tale of alien intervention set against a historical calamity and a family mystery, it offers insight into Yaz’s formative years and serves as a meditation into the rights and wrongs of community, governance, and faith.

1. The story was written by playwright and screenwriter Vinay Patel, who had had his own moment of stunned revelation from an old family photograph, and later used it to develop a scene in his epic play An Adventure. Speaking to the Guardian in 2018. He explained: “My grandad once showed me a picture of him and said: ‘This is the photo your grandma chose me from." It completely upended everything I thought I knew about both gender dynamics and my family’s relationship to itself, so the first scene is a woman with five photos — of different men. She has to get married to one of them but she gets to pick… it’s some amount of power but within a small channel.”

2. In order to get the right location to represent India in 1947 — something the landscape of the British Isles is poorly equipped to do — the Who production team headed out to the Granada province in Spain, near the town of Aldeire. One of the more interesting things about Aldeire is that it is divided into two areas that do not share a common border. Not that this has any purposeful bearing on this particular Who story, but the idea of a divided community feels relevant.

3. For Doctor Who scriptwriters, making up the names of alien races is an arcane art. Vinay Patel told Doctor Who Magazine that he found inspiration directly within his own family for the name of the Thijarians, by reversing the first names of his grandparents — presumably Ajith and Nair — and sticking them together.

4. When the Doctor responds to Prem’s salty jibe about the British carving up the country in six weeks by offering to tell “Mountbatten,” it’s a comment rooted in the historical moment. The Partition of India came after the nation’s troubled relationship with the crumbling British Empire in general and World War II in particular. With the British considering abandoning their previously invaded dominions and Indian home rule on the horizon, sectarian violence began to erupt between religious communities.

Lord Louis Mountbatten was sent to end the rule of the British Raj, and his solution was to summarily split the country according to the majority religions of each area — Muslim and Hindu. He commissioned new borders, drawn up in part using out-of-date maps and censuses and did not take local feelings into account. This inflamed an already tense situation. Somewhere between 200,000 and two million people are thought to have died after partition, particularly in the Punjab.

5. The broadcast of this episode was thought to have been deliberately scheduled to coincide with Remembrance Sunday in the UK, particularly as there is a field of poppies in shot at one point — the symbol of remembrance — and there is footage shown of Prem fighting in World War II. Although this is likely to be no more than a fortuitous coincidence, it does lend extra weight to the theme of honoring the dearly departed, as established by the Thijarians.

6. We’ve come to take for granted that the TARDIS will translate all languages into English — or whatever language best suits the broadcast territory in which the show appears — and so that’s how Prem can congratulate the Doctor and friends on their Punjabi, although we don’t often hear Daleks offering similar sentiments about the Doctor being fluent in Skaronian. This interstellar interpretation gift was first mentioned in the Fourth Doctor story “The Masque of Mandragora,” as being a “gift of the Time Lord.” More recently it has been attributed to the TARDIS’s telepathic circuits, although it does seem to depend on whether the Doctor is awake or not — see “The Christmas Invasion” for proof.

Not that it’s a foolproof, or indeed, Judoon-proof, system. The rhino-faced space policemen have a dialect that is too simplistic for TARDIS interpretation. In “Four to Doomsday” the Fifth Doctor struggles with a primitive Aborigine dialect — this despite the First Doctor being able to understand Neolithic man just fine in his very first screen adventure. Older still are the languages of the Minotaur in "The God Complex" and the Beast in "The Impossible Planet," and they remain opaque to even the Doctor’s ears.

7. When the Doctor says, “Family history and time travel? Very tricky,” she is speaking from bitter experience. The most obvious example would be “Father’s Day,” where the Ninth Doctor takes Rose Tyler to see her father, shortly before he was killed in a car crash, with potentially devastating results.

But you could just as easily apply it to Eleven stalking Clara Oswald as a child ("The Rings of Akhaten"), or the curious synchronicity in looks between Danny Pink and the interstellar traveller Orson Pink in “Listen” (especially given that Danny doesn’t appear to have had any children before he too is killed in a car crash).

But sometimes it’s worth it: Ten meeting Donna Noble’s father and borrowing a pound to secure her a winning lottery ticket in “The End of Time,” for example.

8. Doctor Who scriptwriters love throwing in references to adventures that we don’t get to see on screen. So, when the Doctor mentions a “death-eyed turtle army,” she’s adding to a pile of unseen glories that also include the Time War, Jim the Fish, the Nightmare Child and the Horde of Travesties (“The End of Time”), vampire monkeys (“The Witch’s Familiar”), spider mines (“The Girl Who Died”), the terrible Zodin (“The Five Doctors”), that time when Charlemagne was kidnapped by an insane computer (“The Unicorn and the Wasp”), and “four things and a lizard” (“Blink”).

9. Leena Dhingra, who plays the older Nani Umbreen, was personally affected by the partition of India. Her family left the country in 1947, and she completed her education in England, France, and Switzerland. She wrote a novel in 1988 called Amritvela about a young girl of Indian origin adjusting to life in England and then returning to India later in life.

10. For the second time this season, the end credits of the show are soundtracked by different music than usual. This time it’s a version of the Doctor Who theme that composer Segun Akinola scored for Indian instruments — table, sarangi, and voice — in Punjabi style, backed by the London Chamber Orchestra.

What you may not know is that when the recordings took place at Abbey Road studios, Vinay Patel came along too: 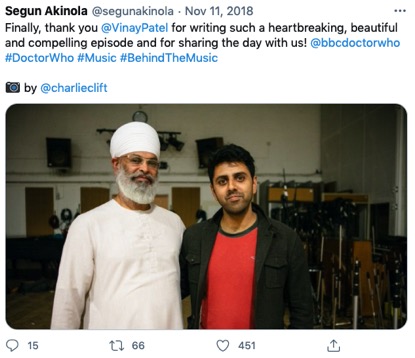 Do you have a favorite moment or reference in "Demons of the Punjab"?