'Doctor Who': 10 Things You May Not Know About 'Dark Water'

"Dark Water" is a shocking watch. There are deeply disturbing threads about love and death buried within the story, and loose ends of plot are tied up in quite a brutal way at times. It reunites the Doctor with an old foe (or two) and separates Clara from her one true love.

It's also a story in which the fiery relationship between Clara and her best friend is once again tested to its limits, while for the Doctor, another old friend is about to arrive in his life and turn it upside down.

This isn't the first time a companion has demanded that the Doctor go back in time to resurrect someone who has died. Not only did Rose Tyler manage to prevent her father's death in "Father's Day," when the Fifth Doctor's companion Adric died in the final events of "Earthshock," he had to patiently explain to Tegan the impossibility of changing fixed events in time: "There are some rules that cannot be broken even with the TARDIS. Don't ever ask me to do anything like that again."

Missy is using the Matrix or Matrix data slice, which is a Time Lord supercomputer that first appeared in the Fourth Doctor stories "The Deadly Assassin" and "The Ultimate Foe," and in both cases it was The Master who controlled it.

In order to keep Missy's identity a secret, particularly when filming the St. Paul's Cathedral scenes in front of large crowds in the center of London, Peter Capaldi and Michelle Gomez had to mouth their lines, with their voices added later on. Direction Rachel Talalay told Den of Geek: “When we shot outside in the two major public places – which I can talk about because of all the press – there were huge secrets to be kept. We put out script sides that were incorrect. We published for the crew a script that was incorrect. The actors, when they finally did the correct lines, mouthed them.”

After the episode aired, Steven Moffat revealed - at a Royal Television Society event - that he had had a decoy revelation shot in order to throw fans off the scent. In the big reveal of Missy's identity, he had her say: "You know who I am. I'm Missy. Or, if you'd prefer, Random Access Neural Integrator. Rani for short."

The Rani was a Time Lady who battled the Sixth and Seventh Doctors.

Missy addresses the figures in the tanks, saying "Humankind, bring out your dead!," a common cry on the streets of London, but not modern London. During a virulent attack of the Great Plague in 1665, men known as "searchers" would roam the streets calling out for bodies, which were collected onto a cart and taken to a burial pit.

The reason the Cybermen are seen coming down the steps of St. Paul's is a direct homage to this picture from the Second Doctor adventure "The Invasion," while the shots of them emerging from their tanks is a nod to "The Tomb of the Cybermen". 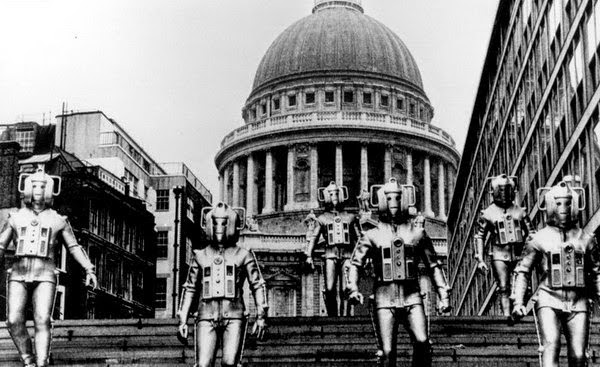 As the Doctor attempts to clear the area around St. Paul's, Missy says "I'm sorry, everyone. Another ranting Scotsman in the street. I had no idea there was a match on," a reference to the public reputation Scottish football (soccer) fans have for rowdiness. It's the kind of joke that could only be made by a Scottish writer and delivered by a Scottish actor to another Scot.

The Post-It notes in Clara's flat contain throwbacks to her time with the Doctor, including The Paternoster Gang, the "Impossible Girl", The Orient Express and "Dinosaur in London". There is also a Hyperscape Body Swap Ticket, which was used as a plot device to get Clara and the Eleventh Doctor into the Royal Albert Hall in London as part of the Doctor Who at the Proms concert in 2013.

The penultimate episode of every season of Doctor Who under Steven Moffat's guidance (bar Season 9) is one that features Cybermen - "The Pandorica Opens," "Closing Time," "Nightmare in Silver". "Dark Water" continues that fine tradition, with "World Enough and Time" still to come in Season 10.

British comedy fans will have had a superb glimpse of what Michelle Gomez (who plays Missy) is capable of from her star turn as the supremely eccentric staff liaison officer Sue White in the surreal medical comedy Green Wing, in which she makes a great show of torturing Doctors in a batty way:

NEXT: 10 Things You May Not Know About ‘Death in Heaven’