(Photo: Doctor Who)
It's official: David Tennant and Catherine Tate are returning to Doctor Who in 2023.
The exciting news was announced Sunday on the show's official website. Tennant and Tate are back on set and filming scenes that will coincide with Doctor Who's 60th anniversary celebrations.
They join new Timelord Ncuti Gatwa, who was introduced to the world barely a week ago.
Returning showrunner Russell T Davies said teasingly: "They're back! And it looks impossible — first, we announce a new Doctor, and then an old Doctor, along with the wonderful Donna, what on earth is happening? Maybe this is a missing story. Or a parallel world. Or a dream, or a trick, or a flashback. The only thing I can confirm is that it’s going to be spectacular, as two of our greatest stars reunite for the battle of a lifetime."
Tennant portrayed the Doctor between 2005 and 2010, and then again in a 2013 special. Tate made her debut as London temp worker Donna Noble in 2006 and then became the Doctor's companion from 2008 to 2010. It's safe to say they were a very popular pairing.
Among the fans excited for their return is Tennant's wife and former Doctor Who guest star Georgia, who posted about it on her Instagram. 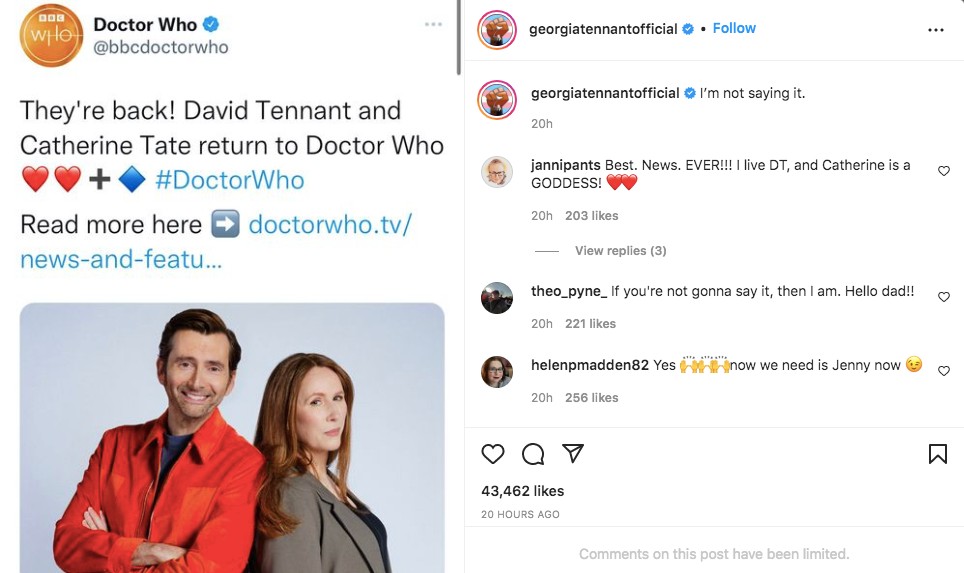 (Photo: Instagram)
Are you excited for the return of David Tennant and Catherine Tate?

Dame Mary Berry Has a New Baking Show Coming Out

WATCH: Emma Thompson Gets Her Groove On in ‘Good Luck to You, Leo Grande’