You may remember B.J. Novak from the American version of The Office as the surly Ryan Howard. Novak is also a writer, contributing to The Office, working on The Mindy Project with The Office co-star Mindy Kaling, having published a children's book in 2014, called The Book with No Pictures, and now recently creating a new TV series.

Novak's anthology series, which is also a comedy, is simply called The Premise, reports ComingSoon.net.

And, what is the premise of The Premise? The first installment of the series will consist of five episodes, set in modern times, with each episode having a new storyline and new cast. The series is an FX original and will be premiering on the streaming service Hulu, with the first two episodes kicking off on September 16. 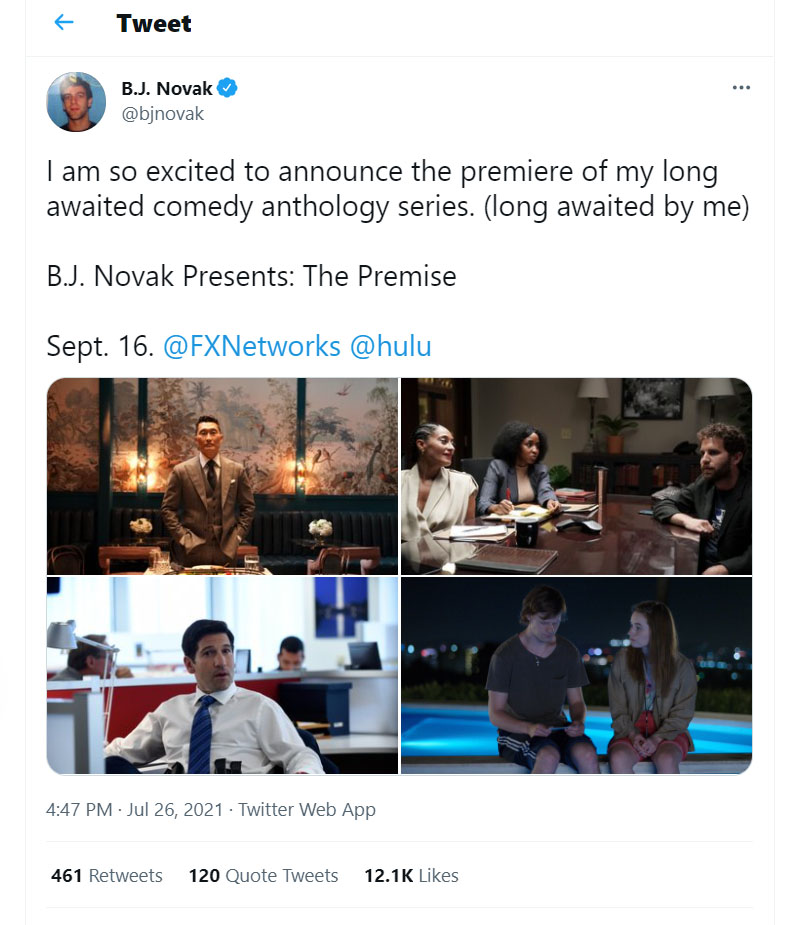 The stories are quite complicated, but presented with humor. Here are descriptions for all five episodes via ComingSoon.net:

'Social Justice Sex Tape' = “When a white, woke, twenty-something ally to social justice causes discovers video evidence of a disputed police incident in the background of his highly embarrassing sex tape, a savvy young lawyer and her mentor strategize on how to best use the tape and witness to save an innocent man from prison.”

'Moment of Silence' =  “After losing his daughter to gun violence, a grieving father pursues a new job as a PR director at the National Gun Lobby, where he’s befriended by a coworker who starts to suspect the man’s motives may be far more dangerous than they seem.”

'The Ballad of Jesse Wheeler' =  “A pop megastar returns to his high school to pledge a donation to build a new library, but instead promises to have sex with the school’s valedictorian as an academic achievement prize. The promise inspires the disillusioned Abbi along with the rest of the student body, while the star’s manager and the school’s principal desperately try to walk back the promise.”

'The Commenter' = “A young woman with a happy life and loving partner becomes obsessed with a critical anonymous comment online, eventually upending her life in a quest for the commenter’s approval.”

'Butt Plug' = “A once-poor child of immigrants who has now become one of the world’s richest men presents a chance at redemption to his former school bully: an uninterrupted hour with his board of directors to pitch a very specific product.”

We are definitely getting a Black Mirror vibe, but isn't that always the case when it comes to an anthology series with a twinge of darkness?

Are you going to add this to your watch list?