13 Women Who Made 'Doctor Who' What it is Today

On screen and behind the scenes, women have steered Doctor Who since its inception in 1963. As Thirteenth Doctor Jodie Whittaker prepares to get to grips with the sonic screwdriver on Sunday (October 7), we've put together a list of 13 of the most influential.

Without Verity there simply wouldn't be a Doctor Who at all. One of the first female television producers in the history of the industry, she was responsible for selecting the original cast, including William Hartnell as the First Doctor, and championing the Daleks, despite the fact her boss Sydney Newman had decreed "no bug eyed monsters!" She intuitively understood what would make the series successful – and under her guidance the fledging show became a national institution.

Called the "unsung heroine of British electronic music," Delia was the musician responsible for turning Ron Grainer's theme tune into an unearthly masterpiece that instantly glued audiences to their screens. She went on to release and perform music under the name of Unit Delta Plus and White Noise, out Radiohead-ing Radiohead before any of them were born.

The Doctor's first ever companion was actually his granddaughter and a fellow Gallifreyan, played by Carole Ann Ford. The precocious youngster accompanied William Hartnell's incarnation of the time-traveller for just over a year, until she was left behind on 22nd-century Earth at the end of 1964 serial "The Dalek Invasion of Earth." She set the template for the Doctor's companion, though it's been a long time now since her grandfather promised he'd be back.

One of the first female directors in BBC television, Paddy became the first woman to helm episodes of Doctor Who when she took charge of the 1966 serial "The Massacre of St Bartholomew's Eve." That has now unfortunately been lost to time, but we can still see her work in the three further serials she directed, "Invasion of the Dinosaurs" (1974), "Pyramids of Mars" (1975), and "Horror of Fang Rock" (1977).

Sarah Jane (played by Elizabeth Sladen) was the Doctor's longest-serving and possibly most-beloved companion, serving his third and fourth incarnation played by Jon Pertwee and Tom Baker between 1973 and 1976. A feminist, she was the first companion who held on to her day job as an investigative reporter, and the first to star in her own spin-off series, The Sarah Jane Adventures.

Played by Janet Fielding, Tegan was every inch the powerful '80s woman when she arrived in 1981. Like Donna Noble, she wasn't about to take any nonsense from her slightly hippy-ish Time Lord friend. She also has a day job, as a flight attendant, and is simply biding her time in the TARDIS until she can get back to the airport, as referenced in this recent promo for season 19 on DVD.

The time between the show's cancelation in 1989 and its successful revival in 2005 is known as the "Dark Years," but Doctor Who nevertheless survived and prospered. That was in part down to the 100 original New Adventures novels written under its name in that time, 10 of which were written by the series' only female author, Kate Orman. 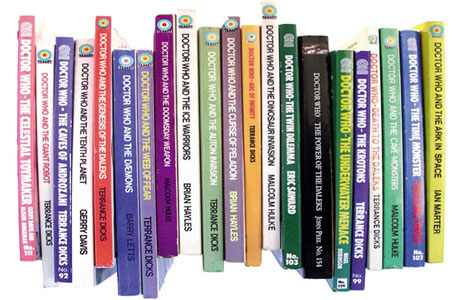 A collection of Doctor Who novelisations[/caption]

Russell T. Davies is credited with bringing Doctor Who back to television in 2005, but just as important was Head of Drama Julie Gardner. She holds more above the line credits than any woman in the entire run of the show, including Verity Lambert, and more even than Davies himself, if you exclude The Sarah Jane Adventures. They both left the show when Steven Moffat took the reins in 2009, leading outgoing stars David Tennant, Catherine Tate and John Barrowman to make this video for the wrap party.

Brave, resourceful, and self-sacrificing, Rose (Billie Piper) is the first leading lady in the Doctor Who reboot. She got hot and heavy with both the Ninth and Tenth Doctors, declaring her love for the latter in an emotional beachside goodbye. Ultimately though, she shacked up in a parallel universe with his part-human counterpart.

When we first met Donna (Catherine Tate) in "The Runaway Bride," she was loud, noisy, and abrasive, i.e. not suited to life in the TARDIS at all. So when it was announced she'd join the show as a full-time companion, not everyone was enthused — until season four got underway, that is. She underwent a major character shift, but one thing remained: she didn't worship the Doctor one iota.

Alex Kingston's lovelorn archaeologist has the power to divide fans. On the one hand, she is a brassy, lavishly camp, and gun-toting badass, but on the other, she can be a bit, well, dramatic. Her plot became even more convoluted when it was revealed she was Amy and Rory's daughter, kidnapped and brainwashed to kill our favorite Time Lord, but her character also offered a rare window onto the Doctor, who, until then, had appeared immune to human emotions like love.

You don't get more formative than the Doctor's mother. Debate still rages as to whether the Time Lady played by Claire Bloom was really his mumsy, as she was listed simply as "The Woman" in the credits. Whoever she was, she clearly had an impact on David Tennant's Time Lord when she revealed herself in "The End of Time." (For what it's worth, Russell T. Davies confirmed she was supposed to be the Doctor's mother in 2010 edition of The Writer's Tale.)

The Doctor won't be the series' first major character to regenerate as a woman. No, the Master did it first, in the form of Missy, short for "Mistress," of course. Played by Michelle Gomez, she is a diabolical and chaotic livewire in Victorian garb, intent on controlling the universe and making the Doctor suffer, for instance by destroying the human race he's so fond of.

Is there anyone you'd add to this impressive list?

What happens when an opportunistic hyena interrupts a leopard and her prey? All-new episodes of ’Eden: Untamed Planet’ premiere Saturdays at 8PM on BBC America. Stream full episodes same-day on AMC+.