(Photo: BBC America)
The Thirteenth Doctor’s tenure has been dominated by fan reactions. Whether it’s the enthusiasm over Jodie Whittaker being the first female Doctor, or the fans creating very specific nooks within Doctor Who lore – Thasmin, the Scronch – and populating them with excitable ideas, no one can doubt the intensity of fan responses to this most colorful of incarnations.*

So, as we prepare to wave a final farewell to Thirteen — with this weekend's premiere of the DW special "The Power of the Doctor" being her last adventure — here are a few of her defining moments. It’s a celebration of her huffing awkwardness, her windmilling energy, some of her greatest foes and the eternal love that blossomed across time and space.
1. The First Hello

Thirteen arrived at the end of a long and rather portentous speech by Twelve, telling his future self to be kind, to never be cruel, and to never eat pears. It felt very much as if Doctor Who as we knew it was ending and something new was arriving. Then she came, a shocked and breathless shock of blonde hair with huge, nervous eyes. Almost immediately, two things happened, she checked her reflection, instantly regained her composure with a very Doctor-ish sense of delight - “oh brilliant!” - and then the TARDIS chucked her out.
As a meta-narrative for the whole furore over a female Doctor, it was pretty skilfully delivered, and as a cliffhanger for this brave new dawn, it was, well, if not masterful, then certainly Doctorful.
2. The Home-Made Sonic

She made it out of spoons! Where other Doctors may have been given their signature sonic by the TARDIS, Thirteen had to forge one for herself out of old cutlery – thereby creating new software, “Day of the Doctor” fans - and made it shine in Coldplay yellow. And in doing so she forged a link between the TARDIS and Sheffield’s industrial heritage, celebrating Sheffield steel while shining a light into her own future.
3. The Home-Made Dalek

Often the scariest Dalek stories are the ones where their power as individual psychotic alien tanks is made devastatingly apparent. “Resolution” takes this approach one step further, developing a story in which one Dalek scout from hundreds of years in the past reconstitutes itself after having been cut into pieces, then builds its own shell, using an unwilling volunteer as a human host. It’s creepy and icky and downright ugly, and goes some way towards reminding everyone why the Daleks are the Doctor’s No.1 enemy.
4. O (as in OMG)

It may be a spoof of the James Bond franchise involving the Doctor yelling, “snap!” in a casino, and wearing three-quarter length tuxedo pants. But the moment that really made this story fly was when she discovered that the bumbling special agent O she’s been working with is actually someone she has known almost all of her life. The Master is back!
Sacha Dhawan’s childlike glee at his own devilment – including a TARDIS disguised as an actual Wizard of Oz flying house – is as infectious as it is unsettling. It’s no small feat to reimagine the part of the Master after Missy did such an astonishing job inhabiting that dastardly space, but he makes it look easy, and, “so. Much. FUN.”
5. “The Scronch” 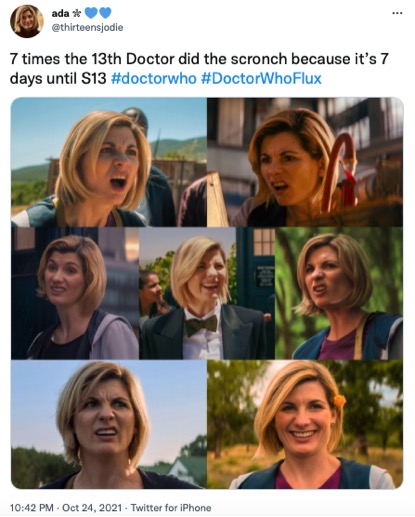 Whittaker has a beautifully expressive face, and the Thirteenth Doctor – an alien - is often called upon to show complicated human-type emotions. The much-celebrated result of the combination of these two phenomena is the scronch. This is a catch-all fan term for the huge variety of facial contortions that Thirteen uses to convey feelings such as confusion, scorn, shock and giddiness. Sometimes all at the same time.
6. The Timeless Child

No one ever said the totality of lore related to Doctor Who had to make linear sense. It’s perfectly feasible for the Doctor to be both a rogue example of a Time Lord, bound by all the laws and expectations of his race, and also the first ever Time Lord, an aberrant arrival from a different dimension and the reason why regeneration is a thing. The story of the Timeless Child may turn out to be a fiction, or it may be something even odder that we can’t imagine yet. That’s what happens when you mess about with time travel. What’s fascinating is the extent to which it makes the Doctor the single most important creature to have ever existed. Kind of makes the Master seem like even MORE of a rotter to be constantly trying to kill them, doesn’t it?
7. The P’ting

A common trope within Doctor Who is to acknowledge that not all aliens have evil intent. Some are nice, some find humans to be largely irrelevant - there was that frog that was also a God - and then there’s the P’ting, the creature that eats starships one bite at a time. The P’ting’s only job is to make a complicated situation worse, and then head on out into space to try and find more tech to destroy. It’s like a sentient version of your smartphone’s battery, while you’re trying to organise a complicated family reunion in the middle of a field (in space).
8. Karvanista

Karvanista is grumpy, and looks like a sentient teddy bear. He’s a no-nonsense interstellar warrior and he has an exceptionally short fuse where the Doctor is concerned. This turns out to have been well deserved, as the Doctor’s memories of their time together as operatives in the Division (and best friends) have long been wiped. Also, his entire species has been wiped out by the Sontarans. And he’s been species bonded with a lippy bloke called Dan from Liverpool. Someone give that dog-faced fellow a little scratch behind the ears, eh?
9. “Thasmin”

Yaz and Thirteen are a match made literally in the heavens. Their relationship is close, but also riddled with doubt and insecurity, not so much the love that dare not speak its name as the love that keeps getting shot at by rotters. The Doctor, always blundering into the romantic lives of his closest friends in a manner that would make a bull in a china shop seem poised, knows she has become the apple of Yaz’s eye and it makes her feel awkward. For her part, Yaz feels unseen, unappreciated and undervalued. The yearning dynamic  - oblivious and yet also somehow devoted – has played out across this dynamic twosome’s entire relationship. And if the current trailer for “The Power of the Doctor” is anything to go by, it looks like it will continue to dominate the TARDIS until Thirteen’s very last moments.
10. The Lone Cyberman

The horror of the Cybermen lies in their converted humanity. As the Doctor explains in “The Haunting of Villa Diodati,” their body parts are replaced “without consent” and this can leave them with such enormous reserves of trauma, to see themselves from the outside would result in a total shutdown of the brain. The Lone Cyberman epitomises both the horrific sacrifice of conversion and the cold brutality of being at one with the Cyberiad. Somehow, putting him among the sensitive poets at the Villa Diodati just makes that juxtaposition worse. Quite how he has survived being tissue compressed by the Master remains to be seen.
11. The Awks

Thirteen is a riot of nervous energy, not unlike a 12-year-old. And as such, she’s somehow lost previous incarnations’ knack of saying the right thing at the right time. She can’t even find a good name for the first three guests she invites to travel with her in the TARDIS. And the less said about the exchange in which Graham opens up about his fear of cancer returning, which culminates with the Doctor saying, “I should say a reassuring thing now, shouldn't I?,” the better.
All she had to do is listen. She doesn’t need to say anything. Which is just as well.
12. The Conversion

“Flux” was a daring season, in which the entire universe was all but eaten by a fire cloud and some galactic toffs attempted to end everyone they took a dislike to with a click of their fingers. It also featured this exceptional cliffhanger, in which the Weeping Angels managed to trick and trap the Doctor, and then convert her to Angelkind. OK, it didn’t last long, but it was thrilling while it lasted. 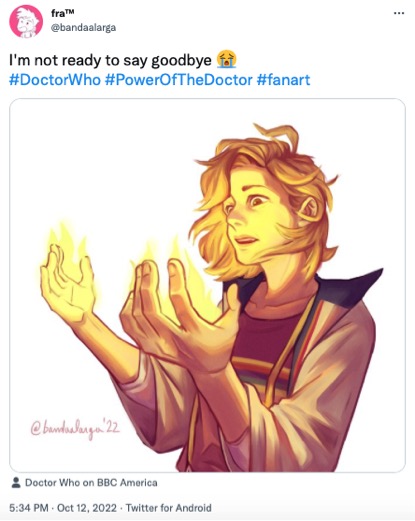 Doctor Who fans have always been intensely creative, showing their skills as musicians, film-makers, crafty creators and artists. But after the monochrome austerity of Twelve, it’s Thirteen’s rainbow glow that has really lit a fire under the fan artists of social media. This may be because her rainbow-hued costume and blonde hair lend themselves well to a multi-color palate, and it may be because her expressive facial expressions (see item 5) are fun to draw. It  may also reflect a certain demographic of artist who sees something of themselves in a female Doctor. Whatever the reason, the fan art explosion has been dazzling to witness.
Are you ready for the Doctor Who special "The Power of the Doctor" premiering this Sunday on BBCA!?