Ben Whishaw is currently co-starring opposite Daniel Craig in new Bond movie No Time to Die, and he celebrates his 41st birthday Thursday (October 14), so we’re taking the opportunity to find out more about him. We already know he’s a great actor – but here are some tidbits about “The Whish” that you might not be aware of.
1. He has a non-identical twin brother, James.
"We were born on the same day and we came out of the same place at the same time, but we are totally unalike," Whishaw told The Sunday Times. "Perhaps you can see we are related, but we don’t look alike. He’s blond. He came out first and was very pink and chubby. And I was this squashed, dark thing that popped out a few moments after. We were so different, but we were always dressed the same and taken everywhere together, even to things I was not interested in, like football. So I’ve always defined myself by him, but in opposition to him. I like everything different to him. There’s not a single thing we have in common, except we both liked the scary rides if we were taken to a park."
2. Before he was famous, he starred in a series of TV commercials for frozen food brand Birds Eye.
Whishaw was confronted with one of the commercials on The Graham Norton Show, and revealed that the chicken curry he was promoting wasn’t as quite appetizing as it looked.
3. Since 2012, he has been in a civil partnership with film and TV composer Mark Bradshaw.
The couple met while working on the 2009 biopic Bright Spark, in which Whishaw played poet John Keats. Bradshaw's other composing credits include Jane Campion's Top of the Lake series and the recent Gemma Arterton movie Walden.
4. He chose not to discuss his personal life at the start of his career.
"And that just made it worse," Whishaw told The Guardian in 2016. “Because then people assume you’ve got some really juicy, awful thing that you’re keeping from them."
Actually, Whishaw says things have been easier for him since his relationship became public knowledge "because now people aren't that interested, because now there's nothing being concealed."
5. He is a cat person… or, at least, has been in the past.
“When I was at drama school I was living with a friend and we took in two stray cats – a mother and her kitten," Whishaw told The Times. "We weren't consciously breeding cats, but they did breed. At one point we were looking after 11 cats in our two-bedroom flat."
6. Watching a 1995 TV profile on Dame Judi Dench had quite an effect on him.
Whishaw says that Dench's acting had a "magical" effect on him because "I couldn't see how she was doing it." He went on to star opposite her in the 2013 West End play Peter and Alice. "What I love most about Judi is her playfulness and lightness. You never feel anguished – as you sometimes can in rehearsals when you feel you are never going to get there," he told The Guardian. "She is such a warm, loving person – but in an unforced way. Same with her acting – nothing effortful."
7. When asked which of his roles most demonstrates his "aptitude" as an actor, Whishaw chose A Very English Scandal.
He won Emmy, Golden Globe, and BAFTA TV awards for his performance in the historical miniseries as Norman Josiffe, an unassuming young man who became embroiled in a major 1970s sex scandal. "I think that was a moment when lots of things came together, the writing was extraordinary, the direction was perfect, and the cast was amazing," he told 1883 Magazine. "So the whole thing gelled. That doesn’t always happen, so I’m proud of that as a piece of work overall, and proud of what I did in it."
8. He says he's "afraid" of meeting new people.
"I get anxious that I’m really bad at small talk," he told The Sunday Times last year. "And I’ve been doing a lot of hanging around on set, where I should be doing lots of small-talking. I’m just quite s**t at it. I don’t know what to talk to people about.”
9. His grandfather, who was born in Turkey to a Russian mother and German father, was a real-life spy who spoke seven languages. After doing espionage work for Britain during World War II, he changed his surname to "Whishaw" and moved to England.
"His real name, and obviously mine, would be Stellmacher," Whishaw told the Daily Telegraph. "But he was no more going to be in the British Army with a German name at that time, than he was going to come to England with one after the war."
Asked if he would ever change his name to Stellmacher to honor his grandfather, Whishaw replied: "It's not something I have considered. I like the name Whishaw and I feel inspired by my grandfather and the events that led him to have a new name."
10. And finally, he's great friends with his Bond co-star Andrew Scott.
And here's an adorable photo of them together. 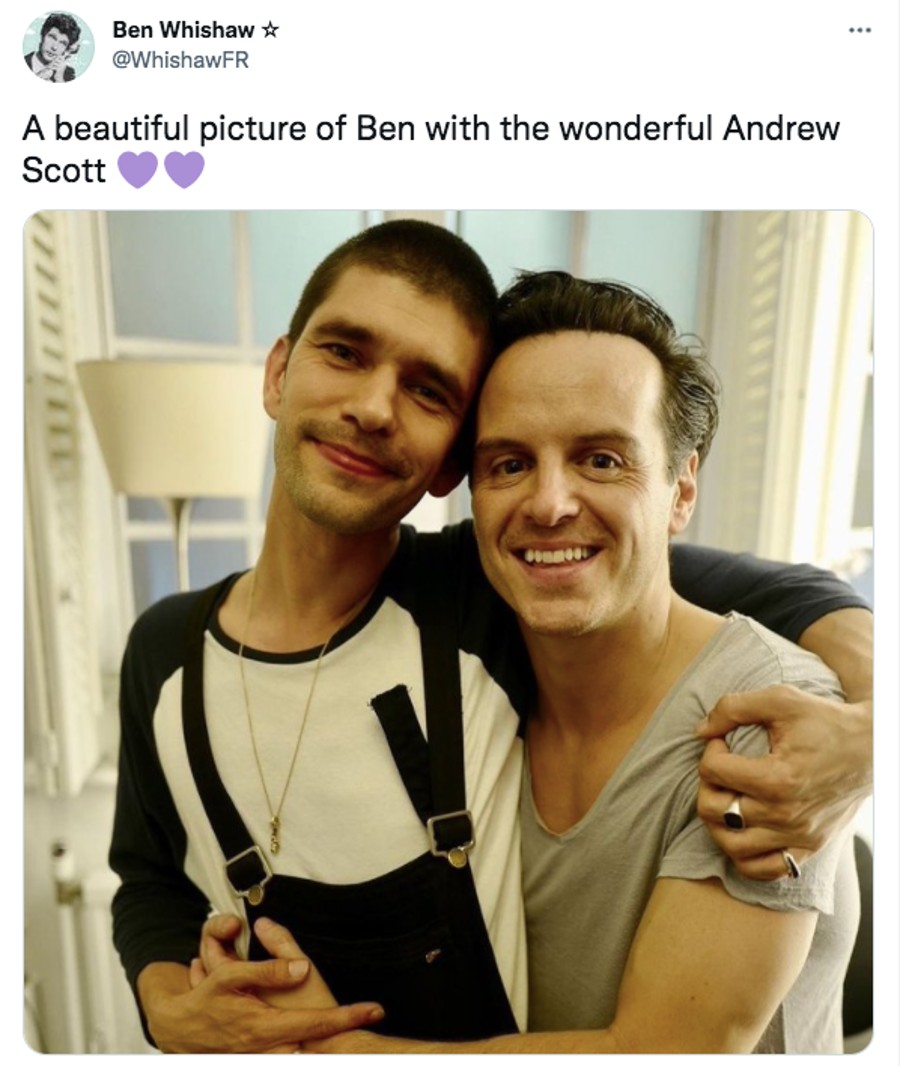 (Photo: Twitter)
Do you have a favorite Ben Whishaw performance to date?