“Nikola Tesla’s Night of Terror” is a story packed with links to other areas of Whovian media, like a kind of network of intersecting wires, possibly powered by a current of some sort.

It is also the only Doctor Who story of the modern era to feature the full name of a real person, and there is only one other example – “Marco Polo” — in the show’s entire history. Surnames have appeared (“The Shakespeare Code”) and even the odd iconic first name (“Rosa”), but mostly the only names in story titles belong to characters within the Whoniverse, like “The Wedding of River Song” and “Amy’s Choice," for example.

1. This is not the first time Nikola Tesla has met the Doctor. He was very helpful to the Seventh Doctor and Melanie Bush in the battle against the Vardans in the Big Finish audio adventure “Maker of Demons”.

2. The real Wardenclyffe Tower – also known as the Tesla Tower – was built in Shoreham, New York in 1901/2. As depicted here, Tesla failed to secure funding to complete his plans for a transmitter capable of broadcasting messages, telephone signals and even images across the Atlantic, and in 2017, the tower was sold for scrap. The building that housed it still exists, and has recently been listed on the National Register of Historic Places. A local campaign group currently owns the site and there are plans to convert it into a Tesla museum.

3. Robert Glenister, who plays Thomas Edison, is one of a very select bunch of actors to appear in both modern Who and the classic series. He played the android Salateen in the Fifth Doctor’s last hurrah, “The Caves of Androzani” – that’s him in the blue top, running off with Peri:

Not only that, but his younger brother is Philip Glenister, famous for playing DCI Gene Hunt in Life on Mars, alongside John Simm aka The Master.

4. One of the more brazen moments of artistic license in this story (beyond the extra-terrestrial threat) concerns the very real Dorothy Skerrit, who was employed by Tesla as a secretary. The story appears to be set in 1903, but Skerrit did not take up her post until 1912. She was very loyal, however, staying with him for 10 years. When he died, she paid fond tribute, saying, “his genial smile and nobility of bearing always denoted the gentlemanly characteristics that were so ingrained in his soul”.

5. Anjli Mohindra – who plays Queen Skithra – is another veteran of Whovian media. Not that you’d recognize her with her monster makeup. She played Rani Chandra, neighbor to Sarah Jane Smith, in The Sarah Jane Adventures from 2008 to 2011. Despite this – and some surprising guest meetings with the actual Doctor - this was her first appearance in Doctor Who proper, and an impossibly rare example of a ‘companion’ actor returning as a villain.

6. This week’s moment of Graham slang comes when he tells Edison to keep things “on the QT”. A well-used archaic phrase dating back to the 1800s, “on the QT” is a stylized retread of “on the quiet,” and it’s a rare example of Graham using a colloquialism to someone who will definitely have understood it.

According to Grammarist, there’s a little bit of transatlantic tension as to who first coined the phrase. The oldest examples found so far are all quotes from British media, but it was coined during a time when American slang tended towards these kind of abbreviations.

7. We don’t need to make too much of a thing about Goran Višnjić being the special guest star, do we? Or the fact that he appeared in ER alongside Alex “River Song” Kingston? Thought not.

But did you know the that one thing he did not enjoy about playing the famous inventor Nikola Tesla was the hairy creation on his top lip? 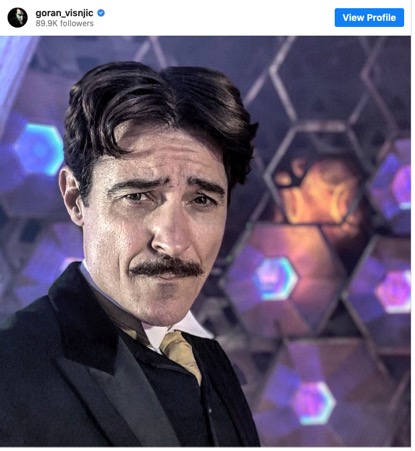 He told the BBC: “I would definitely skip a moustache if it was a fictional character – those things are so uncomfortable! There’s very well-known photograph of Nikola Tesla, he always had his moustache and there are known things about him, what he liked and didn’t like, so I kind of incorporated some of those things into the character. In a way it’s a double edged sword, it’s a blessing because you know things about your character already because they’re given to you but the other side is that you have to do certain things with your character that are established.

“In truth, I can’t even consider Tesla as a historical character from “the books” because I feel like I grew up with him, I knew who he was since I was a kid so in some ways it was like playing someone you know.”

8. Can we have a round of applause for Graham’s science gag, the one where he calls Tesla and Edison AC/DC? Not to humansplain overmuch, but given that Tesla’s electrical system relied on alternating current (AC) and Edison’s on direct current (DC), it’s funny because… oh, you get it.

9. One of the hazards of appearing as a Doctor Who monster is that it’s hard to greet old friends with a mask on. Anjli Mohindra has a great story about meeting Bradley Walsh again – after his stint as Odbobb the Clown in The Sarah Jane Adventures – but only after three hours in the makeup chair.

She told the BBC: “It was hilarious because he sort of introduced himself to me and I thought he was joking. Cause I was like, ‘Oh he’s probably seen my name on the call sheet’ and is pretending, was just taking the mick. I think an entire day had passed before he said: “You’re going to have to show me a picture of what you look like because I'll probably pass you in the street at some point and have no idea.” And it was at that point that I was like, oh, he really doesn’t, he really hasn’t twigged!”

10. The Doctor calls the Queen of the Skithra “a queen of shreds and patches," which is a reference to Shakespeare’s Hamlet. In the play, the titular prince of Denmark refers to his uncle, who has usurped the throne from Hamlet’s late father, as “a king of shreds and patches”.

W. S. Gilbert then seized upon it as a fine second half for the opening line of the song “A Wand’ring Minstrel I” from The Mikado.

Do you have a favorite moment or fun fact from "Nikola Tesla's Night of Terror"?