When you’re making a show that depends as much on fresh inspiration as Doctor Who does, some of your ideas are not going to make it in front of a camera. There is an untold history of the TV show that contains potential stories that were never brought to life, some because of budget limitations, some because the concepts were too close to other ideas, and some because they are just a bit too odd.

Here are 10 of the most intriguing examples:

This was an idea pitched for the show’s second series by William Hartnell — ie. the First Doctor at a time when there was only one Doctor, no Time Lords and no Gallifrey — in which he intended to play his usual role and that of his own son, a younger, evil time traveller with a TARDIS of his own.

It’s not entirely clear whether Hartnell intended to write the whole thing, but he did get to play two characters in “The Massacre,” and so did his successor, Patrick Troughton, in “The Enemy of the World".

If you felt that the ending of Mark Gatiss’s “Sleep No More” was a little ambiguous, that’s because he wanted to create a monster that returned for two stories — like the Yeti. He originally conceived of the first Sandmen story set in a space Wall Street, where executives dealing in stocks and shares wanted to stay awake for longer, before changing it to a sleep research station, with Professor Gagan Rassmussen and his Morpheus pods. The follow-up would have been set in the modern era, and would’ve returned to that original idea of city traders trying to maximize profits by avoiding sleep.

However, before sending in his pitch, Mark discovered that Steven Moffat was leaving as showrunner, and so, as he told Doctor Who: The Fan Show, he decided to "do the story [he'd] always wanted to do — the Ice Warriors on Mars."

What they made instead: “Empress of Mars”

This would have been the Third Doctor’s regeneration epic, and was intended to set in stone a few things about his relationship with the Master. One idea was that the two Time Lords were brothers, another that the Master was somehow an evil inversion of the Doctor (an idea that was later seized upon for both the Valeyard and the Dream Lord). Even the title has a touch of the Sherlock Holmes and Moriarty about it.

However, the sudden and untimely death of Roger Delgado meant that this idea could not be realized at the time.

What they made instead: “Planet of the Spiders”

Some ideas are just too ahead of their time to be made, such as this story of Gallifreyan cat-people, who had a thriving subculture away from the Time Lords, involving gladiatorial arenas. The showrunners were trying to recapture the excitement of a Gallifreyan epic such as “The Deadly Assassin,” however they realized that creating a whole community of cat-people — including the cat-gladiators — was beyond the show’s resources at the time.

Of course, Russell T Davies did introduce a feline race to the Whoniverse, but it’s worth noting even he stopped short of showing their entire society from a distance.

What the made instead: “The Invasion of Time”

Despite the temporal specificity in the title, this was a script written by Stephen Fry that would have sent the Tenth Doctor into the realm of Arthurian myth and legend — specifically the legend of Sir Gawain and the Green Knight. The Doctor would discover that the mystical Green Knight — who survived being beheaded by Gawain — comes from another planet.

He wrote and handed in a script to Russell T Davies, but sadly it was too expensive for the production team to do justice to, and Russell requested some rewrites. Stephen — a very busy man — could not complete them in time, and the idea was shelved.

What they made instead: “Fear Her”

6. “The Laird of McCrimmon”

Sometime it’s nice to tidy up loose ends, and “The Laird of McCrimmon” was one way for Doctor Who to return Second Doctor companion Jamie McCrimmon to his usual timeline. The idea was that Jamie would become possessed and fly the TARDIS back to Scotland in 1746, to Castle McCrimmon, only to discover that an invading army of Yeti, under the control of the Great Intelligence, are surrounding the deathbed of the laird, Sir James McCrimmon.

The Great Intelligence wishes to take over the castle, inhabiting Jamie’s body to do so once the laird has died. The Doctor foils the attempt; Jamie falls in love with a local girl and opts to stick around, becoming the new laird along the way.

What they made instead: “The War Games”

James Henry, scriptwriter, has an astonishing story on his blog about how he found himself pitching ideas to Steven Moffat. One that Steven suggested was that Strax — the beloved Sontaran nurse and Paternoster Gang member — would somehow be taken back to Sontar as a traitor for being helpful to humans and Time Lords alike.

He explains: “So it doesn’t look good for Strax. I had an idea for how you’d explore this, and Steven Moffat was throwing better ideas at me like one of those baseball machines in American films, I was sort of juggling his ideas while mine fell all over the floor and rolled under tables and so on, but we got somewhere in the end, and even though it was the worst pitch I’d ever done, I got to go away and write it up… they batted it about, and by then it was me and another writer up for one remaining slot and to cut a long story short (too late!), they went with the other writer.”

Nothing to do with the James Cameron movie, this was a story that was approved to be made for the 28th season of Doctor Who, which was cancelled in 1987. The story is set in New England, and pits the Seventh Doctor against alien bodysnatchers who reanimate corpses so they can live inside. They have a fossil they claim contains a Silurian god and they want to clone it.

Writer David A McIntee told Doctor Who Magazine: “Towards the end the villain was to get more and more decrepit in each episode, until there was just a skeleton at the end. It was meant to be an Evil Dead-type of thing, but I would have toned it down for Doctor Who.”

With the Tenth Doctor and Donna Noble running riot all over the galaxy, a script by Mark Gatiss was nearly taken up, in which the Doctor takes up an Indiana Jones-style investigation of a series of museum artifacts that appear to be joining together to create what Gatiss told Doctor Who Magazine would be “a puzzle box of sliding doors and traps and stuff.”

Originally set during World War I, Mark was convinced to relocate the action to the Second World War so that the Doctor could battle Nazis. He had got the idea of museum exhibits after reading that during both World Wars, precious historical items were moved for safekeeping, and replaced with more humdrum items that would not be a great loss in the event of a direct hit from a bomb.

What they made instead: “The Fires of Pompeii” 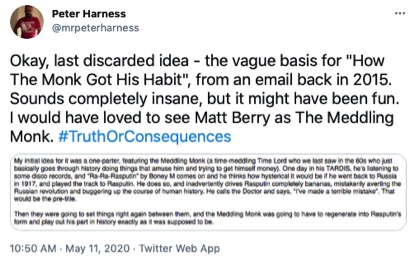 We all love a bit of fan service from time to time, like seeing a character make a return after decades in the wilderness. However, there are limits, and Peter Harness, fresh from writing the season 9 two-parter “The Zygon Invasion” / “The Zygon Inversion,” crossed those limits, and just kept going.

He pitched the idea of an origin story for the Monk — a renegade Time Lord called Mortimus who had crossed paths with the First Doctor in 1965 — and he even came up with a story arc for him that was, in his own words, “completely insane,” and therefore actually rather wonderful.

The idea begins with the Monk (played in theory by The IT Crowd star Matt Berry) in his TARDIS, listening to “Rasputin” by Boney M. Suddenly he decides he wants to play the song to the man it was written about, so he heads for pre-revolutionary Russia, plays the actual Rasputin the song, and watches with horror as the actual Rasputin loses his mind. This prevents the Russian Revolution. Mortimus calls the Doctor to help him put things right, but instead of the First Doctor he gets the Twelfth, and he ends the tale having to regenerate into Rasputin’s form and assume his life story from that moment on.

What they made instead: “Sleep No More”

Which unmade Doctor Who story would you most like to see hit the screen?