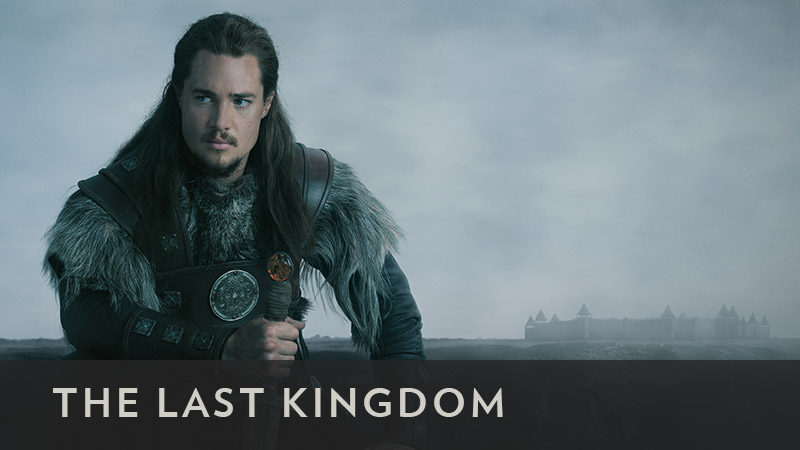 About the Show
The Last Kingdom premieres Saturday, October 10 at 10/9c. It is a contemporary story of redemption, vengeance and self-discovery set against the birth of England. This historical drama comes from BBC America, BBC Two and the Golden Globe® and Emmy® award-winning producers of Downton Abbey, Carnival Films.

Adapted from Bernard Cornwell's best-selling series of books "The Saxon Stories," by BAFTA nominated and RTS award-winning writer Stephen Butchard, The Last Kingdom combines real historical figures and events with fiction, re-telling the history of King Alfred the Great and his desire to unite the many separate kingdoms into what would become England.

Set in the 9th century AD, many of the separate kingdoms of what we now know as England have fallen to the invading Vikings, only the great Kingdom of Wessex stands defiant under its visionary King Alfred the Great (Dawson). It is the last kingdom.

Against this turbulent backdrop lives Uhtred (Dreymon). Born the son of a Saxon nobleman, he is orphaned by the Vikings and then kidnapped and raised as one of their own. Forced to choose between the country of his birth and the people of his upbringing, his loyalties are ever tested. What is he — Saxon or Viking? On a quest to claim his birthright, Uhtred must tread a dangerous path between both sides if he is to play his part in the birth of a new nation and, ultimately, recapture his ancestral lands.

The Last Kingdom is a show of heroic deeds and epic battles but with a thematic depth that embraces politics, religion, warfare, courage, love, loyalty and our universal search for identity. Combining real historical figures and events with fictional characters, it is the story of how a people combined their strength under one of the most iconic kings of history in order to reclaim their land for themselves and build a place they call home.