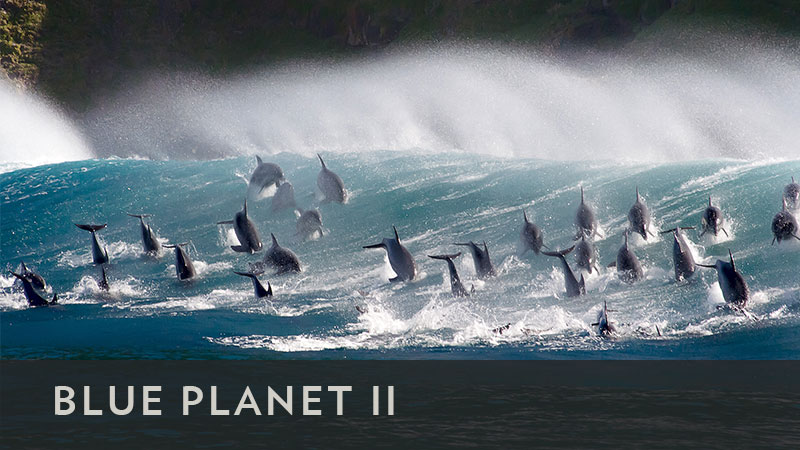 Take a deep breath and embark on a magical, mind-blowing voyage into the most undiscovered place on our planet: the ocean. Planet Earth: Blue Planet II will premiere on Saturday, January 20 at 9/8c, as an AMC Networks simulcast event across BBC America, AMC, IFC, WE tv and SundanceTV. You can catch the rest of the eight-episode series on Saturday nights on BBC America.

Presented by Sir David Attenborough and scored by Academy Award-winner Hans Zimmer, Planet Earth: Blue Planet II takes viewers on a revelatory and magical journey into the mesmerizing world of our oceans — by turn tempestuous and serene, exquisitely beautiful and bleakly forbidding. They cover 70% of the Earth’s surface and hold 97% of all the water in the world. There is more life in the deep sea than anywhere else on Earth, and it is said we know more about the surface of Mars than the depths of our own planet. Our final frontier is the deep ocean – Earth's ‘inner space’.

By using breakthroughs in science and cutting-edge technology to explore this final frontier, the series reveals the astonishing characters, otherworldly places and extraordinary new animal behaviors. Warm and compelling stories about marine habitats and their characterful inhabitants will leave you emotionally invested in our oceans and the creatures who dwell there, and bring a whole new perspective to this little-known world.

Over four years in production, the Planet Earth: Blue Planet II teams mounted 125 expeditions, visited 39 countries, and filmed on every continent and across every ocean. They spent over 6,000 hours diving underwater, filming everywhere from familiar shores to the deepest seas. From the Gulf of Mexico to the Seychelles and from South Africa to Norway, the team filmed several "firsts" including:

• Producer Orla Doherty and her team were the first humans to dive 3,280 feet into the frigid waters of the Antarctic, in a deep manned submersible, to explore under icebergs the size of a city block and discover creatures so alien they could come from outer space.

• At 2,000 feet deep in the Gulf of Mexico, they filmed methane volcanoes erupting with bubbles the size of basketballs.

• Life was thought to be impossible in the deepest point of the Earth’s ocean, seven miles down, but they filmed creatures living under a pressure equivalent to 50 jumbo jets stacked on top of one another.

• Species such as leaping blennies – fish that live almost exclusively on land; Giant trevally that fly out of the water to snatch seabirds in mid-air; the ingenious coral grouper, a fish that enlists the help of an octopus to hunt little fish hiding among coral and, perhaps most charming of all, the industrious tuskfish, who uses a coral anvil to crack open his clams.