If you weren’t quite able to treat yo’self to a trip to San Diego or fine leather goods (Parks and Recreation jokes!) for the Orphan Black panel at Comic-Con, don’t worry—we have all the little bits that you may have missed.

As panel host, Retta (yes, just Retta!) asked all the specific and nuanced questions a card-carrying member of #CloneClub would ask, and in the process, the cast let loose. See? 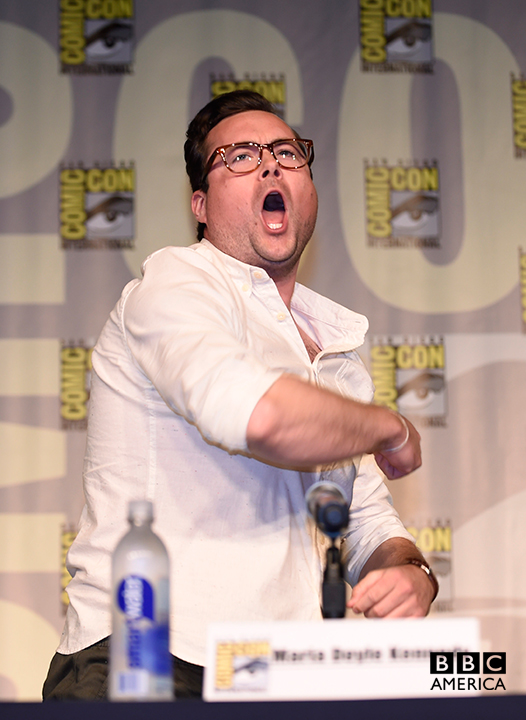 1. Retta introduces Kristian Bruun aka Donnie as “Captain Twerk of the Star-hips Enterprise.” And honestly it rolled off her tongue a little too easily. Hopefully it will roll off our tongues that easily because we are using that ALL THE TIME now. (Sorry, Kristian.)

2. Retta asks the important beauty question everyone’s been wondering, “Is Helena ever going to get concealer?”

3. The fans were treated to something they’ve been asking for for awhile: bloops!! And here you are:

4. When asked about his character’s death (uh, spoiler alert?) Dylan Bruce responds that Paul died “LIKE A BOSS.” We really can’t argue with that.

6. Krstian also revealed that after shooting the twerking scene, he not only found glitter everywhere, including “on his person,” but he also found $20 stuck to his bum when he changed in his trailer.

7. A service dog barked and Jordan stopped mid-sentence saying “Hi, bubs!” sharing that he always says hi to dogs and ignores their owners.

8. Maria Doyle Kennedy reveals that Tatiana Maslany does, in fact, have one flaw. Wait for it. Wait for it. She farts! Sometimes, she’ll just “let one off.” She’s human after all, ladies and gentlemen. We now have the proof!

9. Tatiana Maslany reveals that Krystal is based on an impression she used to do of Jenny Slate’s character from the “PubLIZity” sketch on the Kroll Show.

10. After an audience member asked about the possibility of prequels, John and Graeme pointed viewers to the show’s comic books, describing them as “Clone Breakfast Club.” So obviously all the guys proceed to divvy out parts. Jordan says, “I’m playing Molly Ringwald.”

11. And the last, best moment has to go to Mr. Dylan Bruce. He not only reveals that “Wrecking Paul” is his favorite thing ever (Google it!), he also declares, “Once you’re in Clone Club, you’re always in Clone Club.” We couldn’t have said it better ourselves.

See what you may have missed for yourself:

And with that, we leave you with these with no comment: