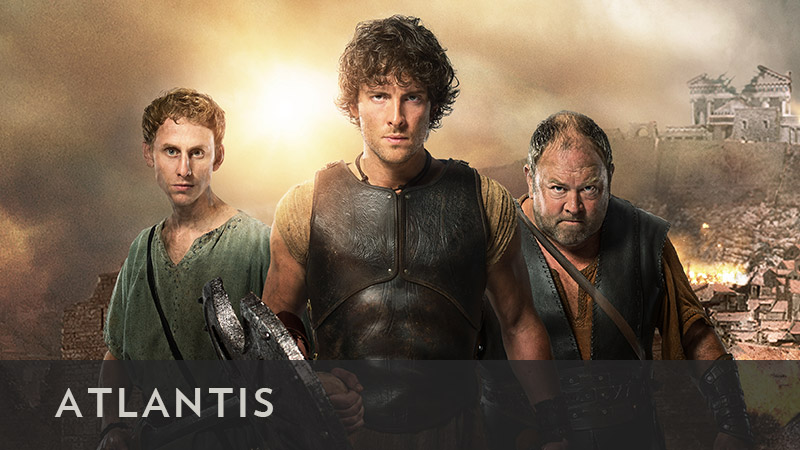 From the creators of the global hit Merlin and BAFTA award-winning series Misfits, BBC America's co-production, Atlantis, returns — plunging ever deeper into the machinations of the legendary city and its celebrated heroes. A year has passed and much has changed. With Minos dead, Ariadne (Aiysha Hart, Honour) is Queen and finds herself at war with her old adversary Pasiphae (Sarah Parish, Hatfields & McCoys). The kingdom stands on the brink of collapse and the struggle for power is both bloody and brutal. With the future looking bleak, Ariadne turns to her most trusted friends for support and so, Jason (Jack Donnelly, Dancing on the Edge), Hercules (Mark Addy, Game of Thrones) and Pythagoras (Robert Emms, War Horse) are thrust into the very heart of politics and power in the city.

Season one introduced Jason, a young man who went in search of his missing father and ended up on the shores of the ancient fabled city of Atlantis – a magical place filled with secrets and deceit to which Jason seems inexplicably bound. Befriended by Hercules and Pythagoras, Jason embarked on an epic adventure, battling against some of the most famous names of Greek legend, often in unexpected guises. Before long Jason caught the eye and heart of the beautiful Ariadne, the princess of Atlantis whose family and royal standing restricts who she may love. As a result, Jason discovered the treachery of Atlantis' rulers, particularly Queen Pasiphae. But Jason found guidance and protection with the revered Oracle (Juliet Stevenson, The Hour). He learned from the soothsayer that it's no mistake he happened upon the shores of the famed city — it was fate.

The season one finale shockingly revealed that Pasiphae is in fact Jason's mother. But as season two begins it's clear that Pasiphae's desire to reign has not abated and rivalry with step daughter Ariadne has taken her to new depths. Jason's personal involvement with Ariadne is surely a complication for Pasiphae, but will the knowledge that Jason is her flesh and blood weaken her resolve? As the battle for the throne intensifies loyalties are tested to the limit and the responsibilities of duty become increasingly unforgiving. These difficult times require hard choices for all as secrets and lies become the currency of choice and no one is immune to betrayal. As the kingdom is threatened with destruction, the time has come for Jason to fulfill his destiny — or Atlantis will be lost beneath the waves forever.