If you weren’t quite able to hitch a ride to San Diego with Jesse Towing for the Orphan Black panel at Comic-Con, don't worry—we have all the little bits that you may have missed.

Comedy Bang! Bang!'s Scott Aukerman hosted the show's final SDCC panel before its fifth and final season in 2017. The host was joined by Tatiana Maslany, Jordan Gavaris, Kristian Bruun, Kevin Hanchard, show co-creators Graeme Manson and John Fawcett, and Kathryn Alexandre, Tat's clone double. Oh, we were there too, and picked up on all the little things any true superfan would care about. And we're ready to share...

1. Kristian Bruun is all brawn, running out to the panel and lifting his chair above his head. (We also just really wanted to make the pun off his last name.)

2. Tatiana comments on the audience's cosplay and immediately notices a real Leekie head on the audience. The head sits in front of Kristian for much of the panel before he fake gags (JUST LIKE HE DOES IN THE SHOW!) and returns it to its Clone Club creator.

3. The fans were treated to a video looking back at some of the series' highlights of the last four seasons. And now you get to enjoy it too:

4. Tatiana talks about her myriad sex scenes on the show and says it's her favorite part of doing the show! We'll just pretend she's being serious. More importantly, she adorably used the expression to put loops  in one's belt rather than notches. Since Tatiana Maslany can do no wrong, we have now officially changed the common expression.

5. Scott wanted to know if Tatiana had prepared a specific accent for Beth, like a New York/Yawk accent. According to Tat, Beth didn't have a New Yorker's accent but rather their attitude. We'll just assume that's what attracted Art to her.

6. The idea of a romantic relationship for Felix was explored, but ultimately a complicated relationship with his biological sister, Adele, was pursued. While Jordan talked about Felix's rift with Sarah as a result, Kevin mentioned that his favorite moment was Felix's quick flick of mashed potatoes at his adopted sister. Graeme and John explained that this scene was originally envisioned as an Animal House-style food fight, but as logistics worked out it was ultimately filmed as a flick of clean, dry mashed potatoes.

8. Kristian requests more action for Donnie next year. And the creators oblige. YESSS!

9. Scott finally mentions DELPHINE! And he wonders whether she and Cosima really do it when they reunited. He and Tatiana wonder if she was too sick. Tatiana's response?

10. The show's creators address the mysterious head of Neolution, P.T. Westmoreland, who was — spoiler alert — revealed to somehow still be alive. And in case you were wondering, the P stands for... PERCIVAL! PT Dubbs for short.

11. Graeme and John revealed that we just might see a little more Sarah vs. Rachel in the next season.

12. John has talked about a Christmas special since the very beginning. Kevin's brilliant name for it? "A Very Helena Christmas."

13. Kevin Hanchard does a decent Helena impression and we know this because along with his brilliant Christmas special idea, he declared, “Babka cake for everyone.”

15. After seeing how often Tatiana and Krisian crack up on set, Tatiana admits to them being the most irritating on set.

16. Scott brings up Tatiana's improv beginnings and asks her to do a little... in character! 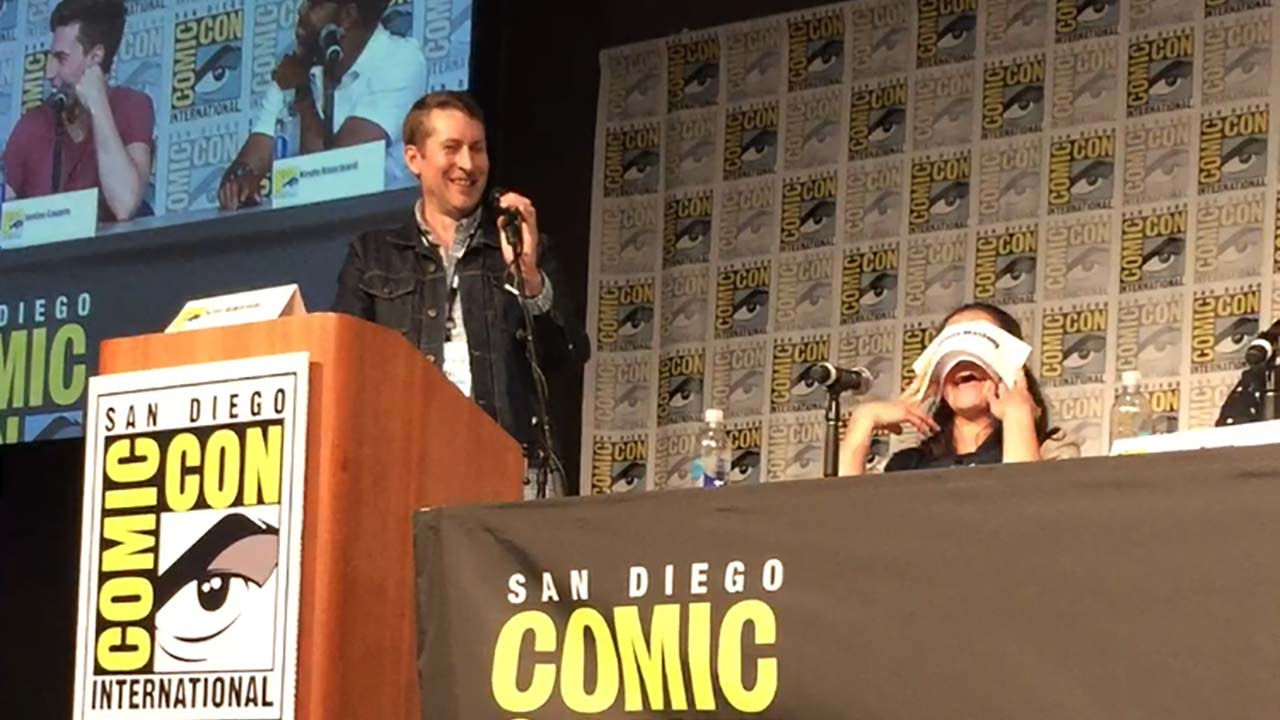 We know, Tat. We couldn't believe it either.

You're going to want to watch this:

17. Tatiana gets a standing ovation from the audience for her Emmy nomination. Feel free to stand up while you read this.

18. The cast make predictions about how the show ends after saying they don't know what's planned. Here's a quick rundown:

Art ends up in... Belize. (Kevin is hoping to shoot on-location.)

Felix lands in 1967. (He would make an interesting Doctor's companion, we thought to ourselves. Because Comic-Con.)

The creators want a 12-clone scene.

19. Kristian does his best to predict the series finale's final words. "I guess this really was a Game of Clones."

20. And finally, the panel ended as everything begins.. with the fans. Thank you, Clone Club.

21. But wait. There's more. Tatiana made a HUGE announcement: ONE LUCKY CLONE CLUB MEMBER WILL WIN A WALK-ON ROLE ON THE FINAL SEASON OF ‪#‎OrphanBlack‬!