Episode 1: What You Didn't Know About 'The Few Who Dare'

THE BEGINNING OF THE END

Often we start prepping a new season of OB we begin without an office already set up. So sometimes for the first few days we all work without desks or tables. 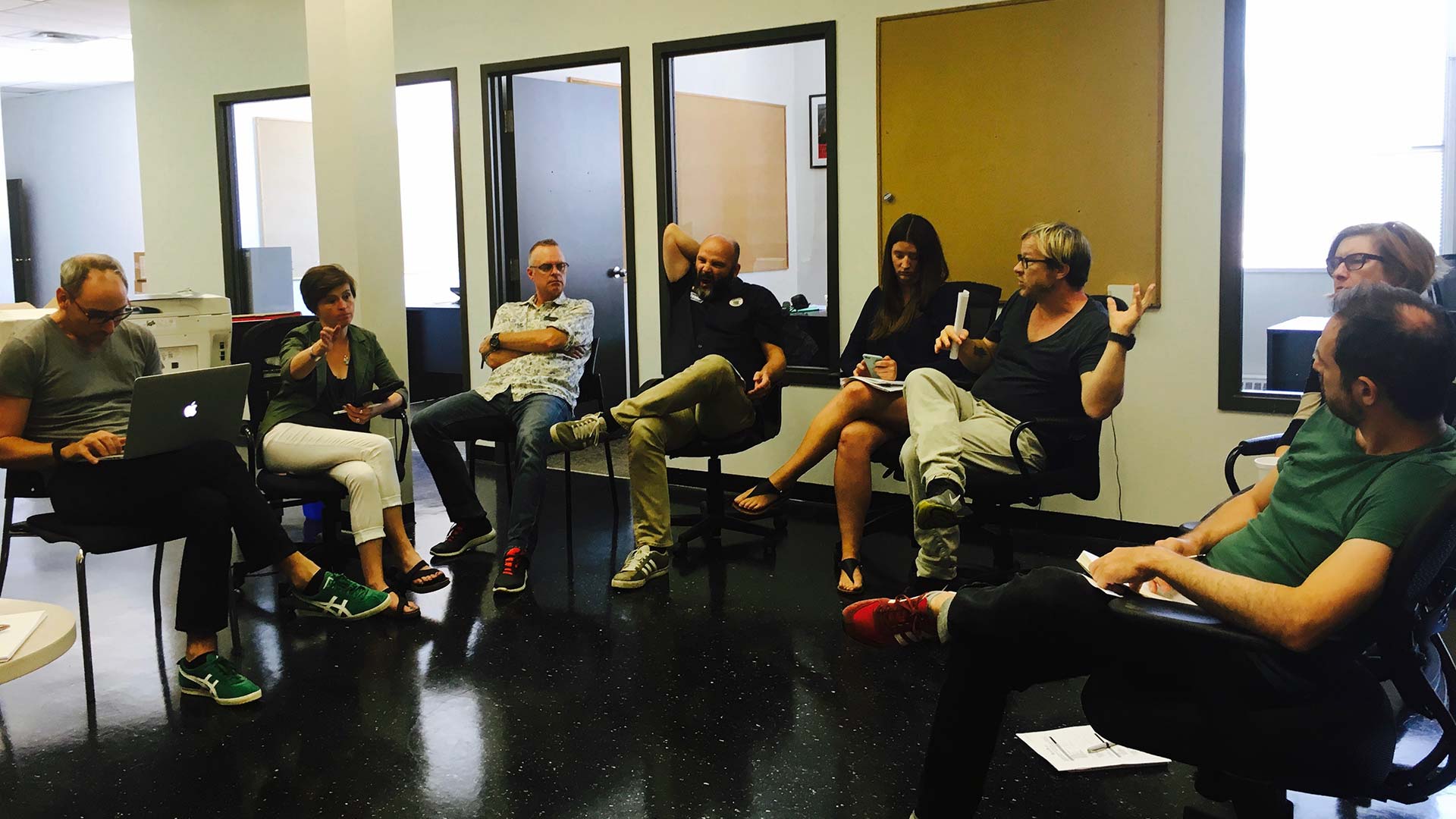 Fun Fact: Ever since Season 2, when the show had finally aired and was popular, we have had to name our production company something other than Orphan Black to keep our location and spoilers under wraps. To come up with a name we have a box where anyone of the cast/crew can suggest names and then we have a big team vote at the end of our first week back together. Joanna Moore, our first 1st AD, has won the anonymous name game three seasons in a row! She came up with Time Vampire, Rabbit Hole, and finally this year Swan Song. 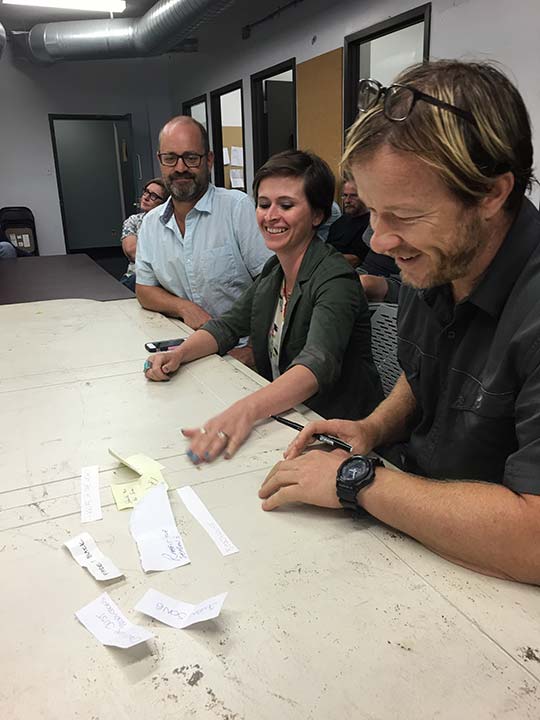 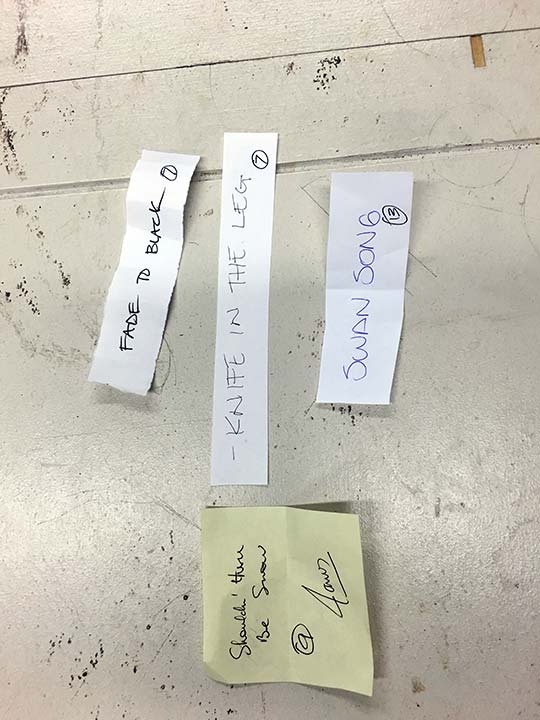 In Season 4 we began to tease the village and you saw bits and pieces of it through Cosima’s POV. This season we had to build the village, and that was a huge undertaking. First, we had to find a location that would let us build an exterior village and keep it there for six months. Second, it had to resemble the type of landscape that we had established in Episode 410. Third, we needed to be able to get huge trucks, equipment, and cranes into the village, but we needed a wooded area without roads, so we had to build our own “roads” if you can call them that. Third, it needed to be rural yet within the GTA (greater Toronto area) because we couldn’t travel our crew outside of the Toronto zone. Fourth, we wanted some sort of mansion/house that was already there so that we could put P.T. Westmoreland (PTW) in his own home. And finally, we needed to be able to power this area for our lights, cameras, and crew. So, after knowing all of that, you can imagine there weren’t many options that would work or fit this very specific bill. Our locations team did tons of searching, but ultimately we were only left with one or two options and the Rouge National Park seemed to be the place. So even though we had used it before, we knew we could pull off a new look and feel here. And so, we present to you the village. 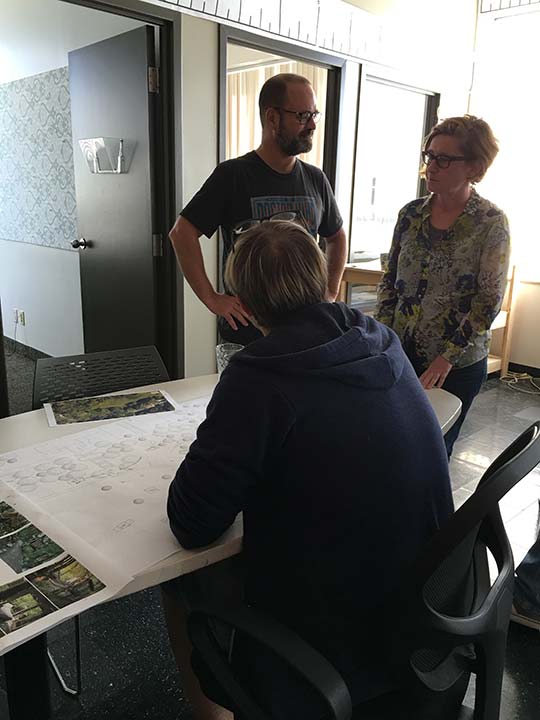 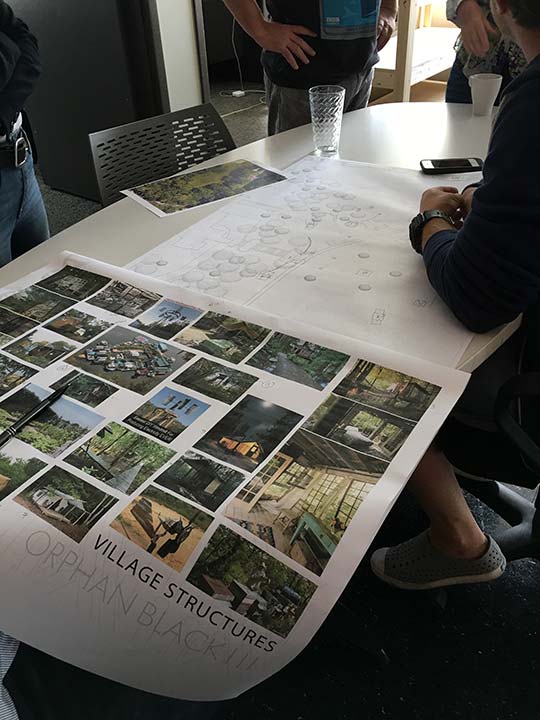 Fun Fact: The village and PTW’s house specifically is the same building as the Birdwatchers home from Season 2. We used visual effects, set dec, and a fake wall to help disguise that it was the same house. So, when you are in PTW’s office/living room you might recognize the fireplace, but hopefully that’s about it! The rest is brand new.

Fun Fact: We had to hire a security team to patrol the village 24 hours a day, seven days a week while we were shooting this season because the village could never be left unmonitored, which — as I'm sure you can imagine — cost a pretty penny. 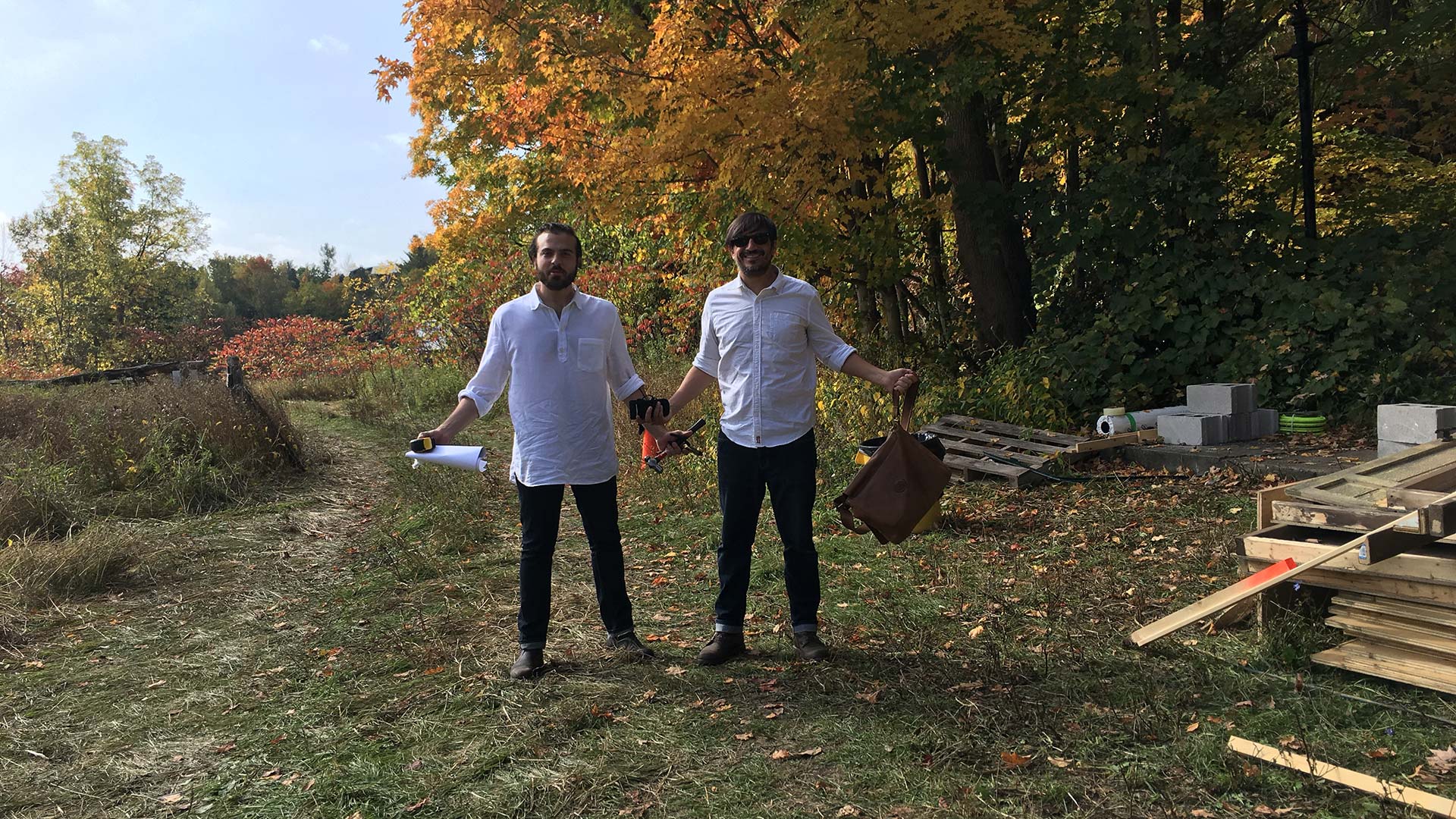 We tend to like to celebrate birthdays around the office. We are such a tight-knit work family, and during our first weeks of prep, Renee St Cyr — a new writer to the show — turned the big 3-0! 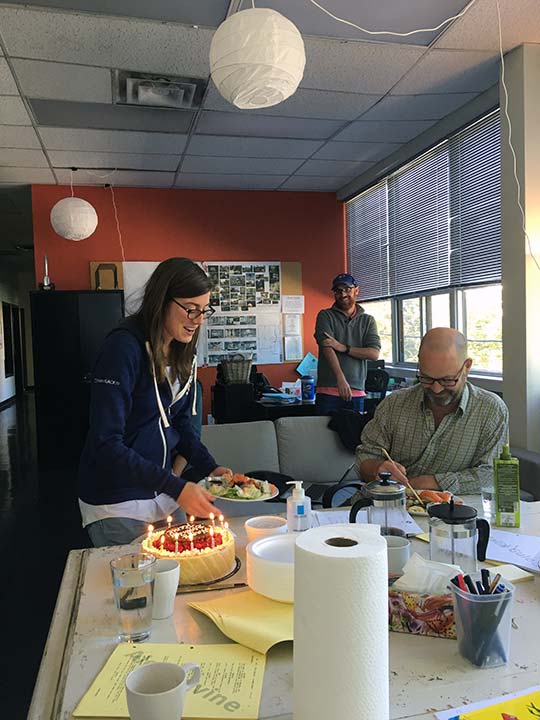 Fun Fact: Renee St Cyr was our story coordinator in Season 4, and come Season 5 she got a huge promotion and two scripts. Renee wrote Episode 507 and co-wrote the series finale with Graeme.

Once the script is at the production "white" stage or close to it (this is usually the third or fourth draft of a script and the point at which we share it with all of the cast/crew), Graeme and the writers usually need to visualize it in order to make changes for production, network notes, or producer notes. To do so, we usually take each act and lay it out on a table flat in columns or put it up on a pin board so that it’s easier to move scenes around. Here’s Graeme staring down the gun barrel as he thinks about Episode 501. 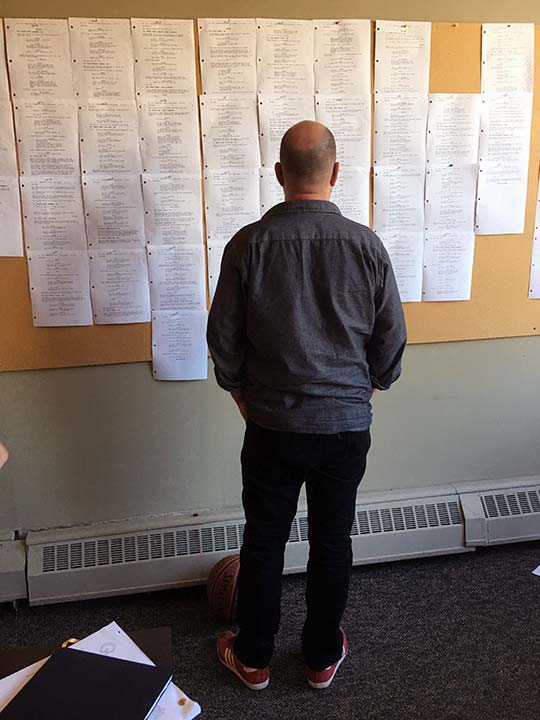 The boat house set might have been one of the hardest and most moved sets we have ever built. It was brought to and from the beach location twice and then rebuilt inside our studio twice. When Sarah is exterior, the boat house is on the beach location, but once inside the door, she is on stage in the studio. We did this so that we could control the boat’s coming and going.

Fun Fact: We use a tray type of mechanism on the floor where the “water” should be that is full of about five inches of water. We need real water there so that our DOP Aaron Morton can use lights to create the reflection of the water. It is necessary for it to look authentic! 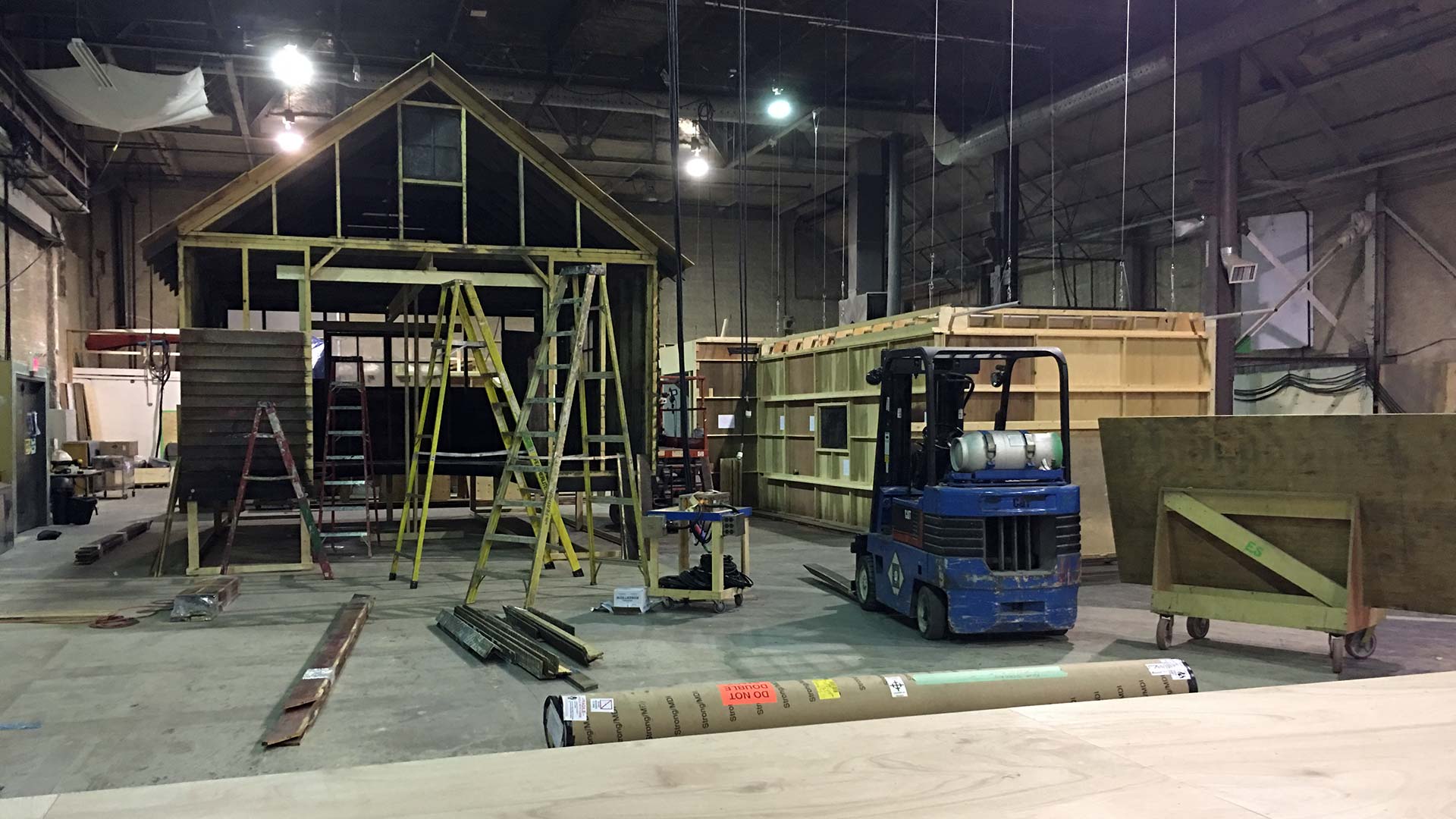 THE MONSTER IN THE WOODS

The pilot teases a new and mysterious creature in the woods on our Neolution island. We only get brief glimpses at it as it attacks and bites Sarah. We will learn more about this creature as we continue down the rabbit hole this season, but what we can tell you is that we used a fantastic actor, Andrew Musselman, to play this new character. And we used some cool prosthetics to make him look the way he did. You can feel the influence of the Island of Doctor Moreau in this creature’s creation.

Fun Fact: The wolf that Sarah and the hunters come across in Episode 501 was created using a combination of a stuffed wolf prop and VFX help in post. We had to use both because it was hard to find a wolf prop that we could cut holes into and cover in blood, guts, and gore. So, the dummy prop worked on set, but we felt it didn’t look quite real in post. So, Geoff Scott, our ever ingenious VFX supervisor, decided we would use his own dog — a husky named Blue — as the face for the wolf. He took photos of his dog sleeping and we used them to create a hybrid between the prop and the actual dog. 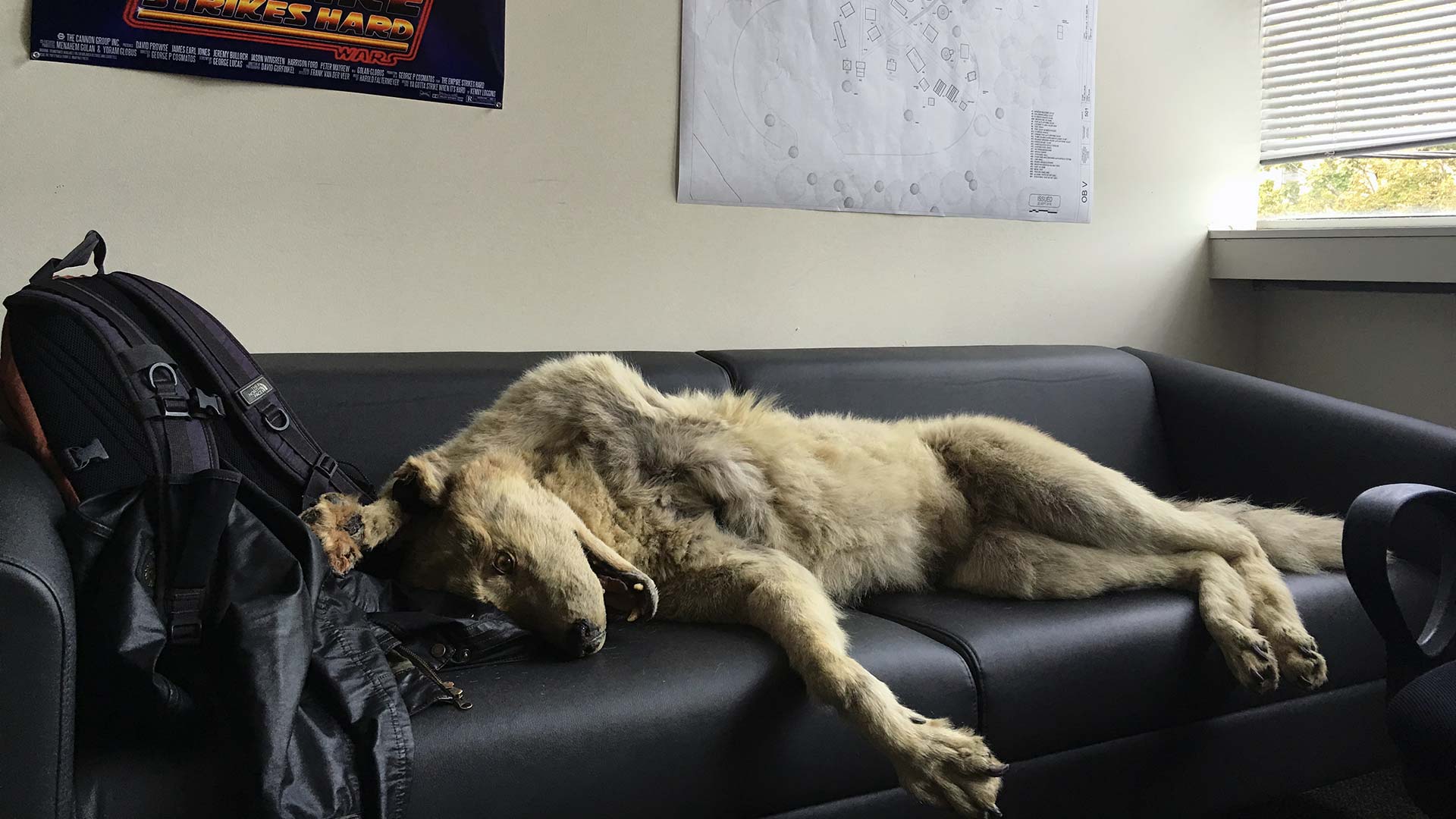 Fun Fact: We open the show with Sarah struggling on the beach to get away from Rachel and Susan’s mansion. What you probably didn’t know is that we shot all those scenes during the day! Yep, all those night scenes were shot in daylight, and made to look like night in post using VFX and color effects. We even had to erase a few people who were taking their dog for a walk down the beach!

Fun Fact: The tampon as a first-aid tool was an idea that came from our first AD Joanna Moore. We were discussing what could possibly be in a woman’s pocket and we thought tampon. Then she did some research and using a Buzzfeed article she found a bunch of different uses for a tampon outside of what it is designed for. From there the idea was born!

In Episode 501 we introduce a new partner for Art, and it is pretty clear from the beginning that Matty Engers is not on Clone Club’s side of this war. What you probably don’t know is that original the writers created this character as a man, however as we went through the casting process, we just couldn’t find the right fit for the character. So, creative as always, we decided to open it up to women and see who could pull it off; only we didn’t change a thing about the character or their dialogue (hence the misogynist line). Lucky for us, Elysse Levesque came in, and nailed it in her first audition, and Matty Engers, the woman, was born.

Fun Fact: Elysse and Tatiana are both from Regina Saskatchewan and grew up doing improv together as kids.