1. I’ve written books and written and directed movies, but this was my first time writing for TV. What’s that like if the show is OB? Imagine that the first marathon you run is in the Olympics. Naked. Wearing someone else’s shoes. 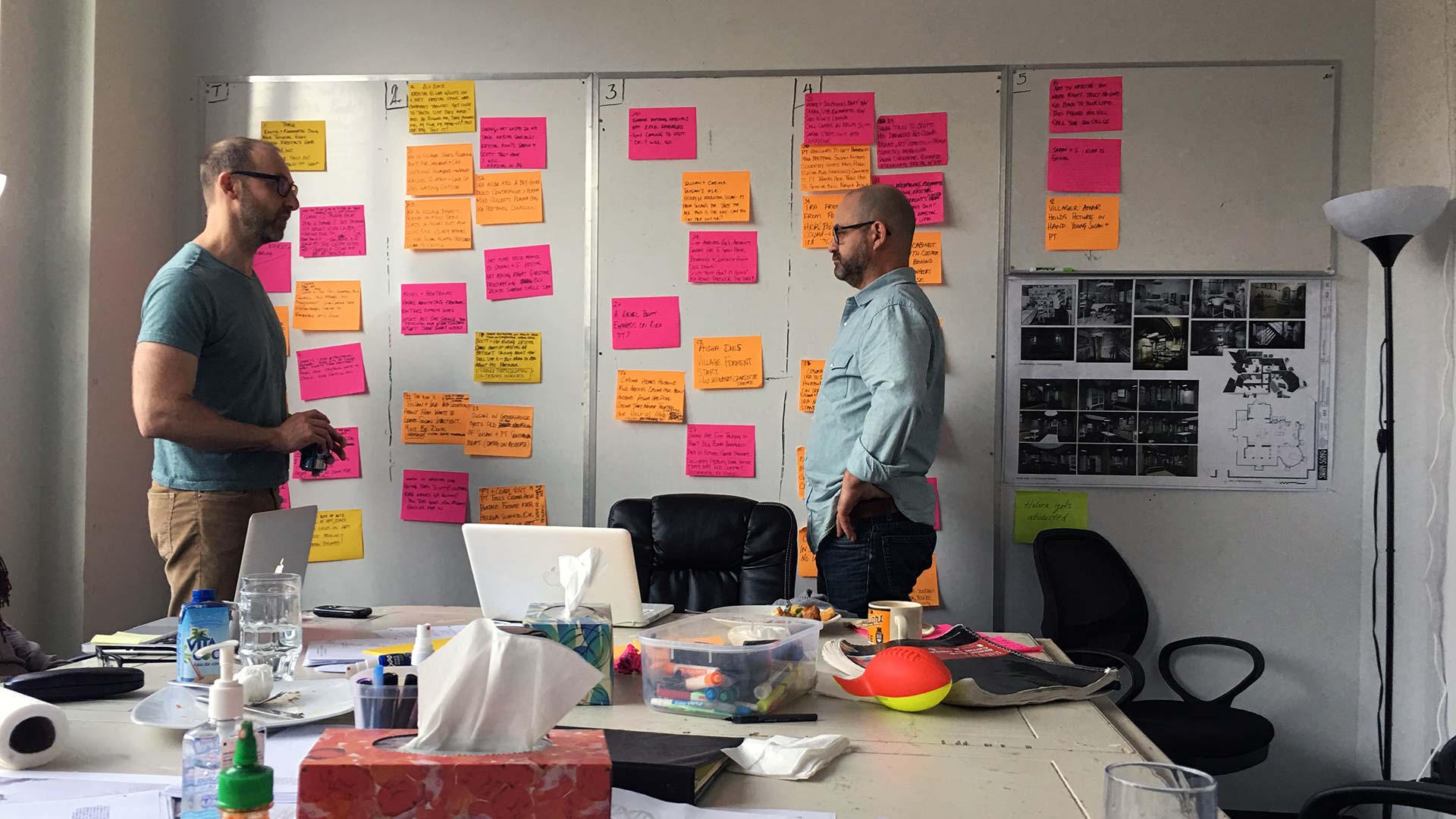 2. Because episodes are assigned largely by seniority, mine landed in the middle of the season. It’s the luck of the draw. All the writers break the season together, and where stories land remains in flux for a long time. Grace Paley — a writer I love, — has a story collection called Enormous Changes At The Last Minute. It could be the epigraph for writing on OB.

3. If your head doesn’t explode, you come to appreciate the benefits of enormous changes at the last minute. What looks like chaos, confusion, and indecision is also energy, rigor, and a refusal to compromise.

4. File under: Be Careful What You Wish For. A big part of what drew me to OB is how tonally nimble it is. It’s tense and fast-paced and violent. But it’s also intellectual and sexy and funny. Often all in the same episode. It’s what makes the show great, but it’s also what makes it a challenge to write. That was 506 in spades. Krystal returns and Susan dies. Krystal is outrageous and lovable; Susan is regal and complex. Krystal is in the city; Susan is on the island. Tonally, they’re polar opposites. Now go stitch that together in a way that looks seamless. (Fortunately, many hands helped with the stitching: Graeme and all the other writers. John. Our producers, Kerry Appleyard and Mackenzie Donaldson. Tat. And Grant Harvey, the episode’s director.)

5. The final season involves a lot of goodbyes. Susan dies. So does Ira. But to keep the story fresh also requires hellos. Part of the fun of 506 was getting to introduce a couple of new characters. So we get Brie, Krystal’s sweet, zany, klepto roommate. And we get Len Sipp, Krystal’s suave, vain, duplicitous deepthroat/love interest.

6. The Brie you see is Brie 2.0. For a long time, Brie wasn’t named Brie and she was conceived as Krystal’s monitor, the surprise antagonist in Krystal’s storyline. In that version, Krystal was the one who got poisoned by Big Cosmetics. Sarah impersonated her with Len Sipp to figure out what happened. Meanwhile, Krystal — her hair falling out — had to confront her superficiality and mortality.

7. The Len Sipp you see is something like Len Sipp 3.0. There was a time when a version of the character was introduced with Krystal in 504, in Greg Nelson’s episode. Back then, I think his name was Fritz Haber and he was older, heavier, and had a German accent. Then he dropped his German accent, 20 years, and 40 pounds. Once we started imagining a hip Sipp, the possibility was raised that Tom Cullen might be available to play the role. There was a lot of excitement about the prospect of Tom playing opposite Tat in the final season. Though once Tom committed, we all felt the extra pressure to get that relationship and storyline right. Tom and Tat helped tremendously in shaping that character and his dynamic with Krystal.

8. PT’s livestock. After what happened in 505, we had to reveal who Mud really was, how she ended up on the island, and why she was so loyal to Westmoreland. I love digging in and doing this kind of character work, especially because we believed that Jenessa Grant, who plays Mud, could bring a lot of depth to the role. Graeme had a concept for Mud, and I worked with it to develop a backstory for her. Since the season’s theme is longevity and overcoming death, we could imagine Westmoreland’s experimental science being used to bring this girl back to life. Hence her seemingly unwavering devotion to him. Also coming out of 505, we felt we needed some visible manifestation of Mud’s penance or punishment. Otherwise why would Westmoreland still trust her? I don’t remember how the idea of the cowbell came to me, but once it did, it felt like the kind of strange thing that made sense psychologically for her and aesthetically for the village. And once I had something tangible to work with, I was able build a story arc around it.

9. Wordsworth and web tutorials. Again it’s a credit to the latitude of OB that we can have characters elegiacally reciting a Wordsworth poem in one scene and other characters taping a hilarious make-up tutorial in another. I proposed the Wordsworth poem because I was trying to find something intimate and emotionally plausible that could pass between Susan and Westmoreland in their final exchange. I had a different Wordsworth poem in mind at first, but it didn’t feel quite right. Then I came upon the one we used in the episode. It was moving and seemed thematically apt. Too apt? There was some concern that it might feel contrived. I think in the end the combination of Rosemary’s delivery and the way it’s edited over the montage is really powerful.

As for the web tutorial, that came out of riffing in the room about what the teaser for Krystal’s episode could be. I think the idea came from Renee, but we all thought it was terrific and—especially because I knew nothing about it—I was eager to make it work. (I have three daughters, but they’re still too young for make-up.) I watched a lot of tutorials and was impressed and charmed by the young women who made them. They were smart, proficient, funny, self-effacing, and genuinely interested in sharing their knowledge with others. Both in style and substance, I drew a lot from what I saw. But I thought the girls were lovely before they put the make-up on and that they didn’t need it. The sensation corresponded with a central theme for OB — the way cynical forces profit from messing with women’s bodies and minds.