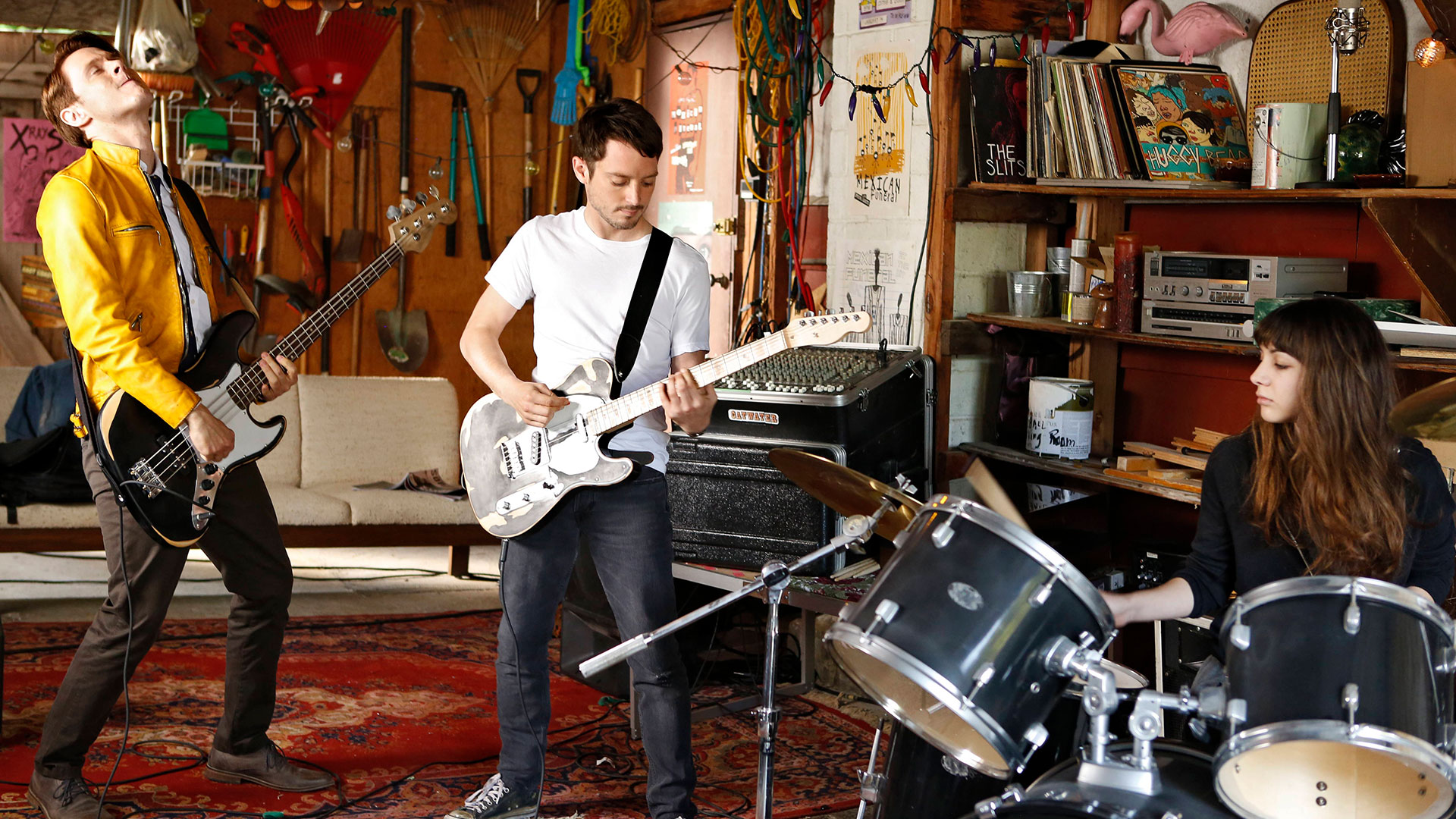 1. Stephanie W. via Facebook: Do you ever try to sneak some of your favorite artists into the things you're making? What was your favorite song you snuck in that you didn't think they would let you get away with??

It’s always fun to work with artists that you love. We will say that first and foremost, what’s best creatively for a scene always takes priority, so in that sense, we don’t really play favorites. That being said, there are certainly scenes where we watch and immediately say, “Oh wow— so-and-so band who we love would be perfect for this.”

For Season 1 of Dirk, we got to use a lot of music we love. One of the highlights was definitely the featured usage of Diane Coffee, whose songs can be heard around six to seven times throughout the season. It’s one of those times that music is not only playing an integral role in the emotional foundation of the show, but also a huge part of the storytelling. So it was fun not only tell an important story through the artist, but also through an artist that we love.

Additionally, we had the immense pleasure of working with Elvis Kuehn, member of the great L.A. punk band FIDLAR, in creating an original song for Todd and Amanda to jam to (and Dirk, in his fantasy). Robert has been friends with Elvis for years, and it was an incredible experience getting to collaborate with him and get inside the minds of Todd and Amanda and what a jam for the brother and sister duo would sound like. 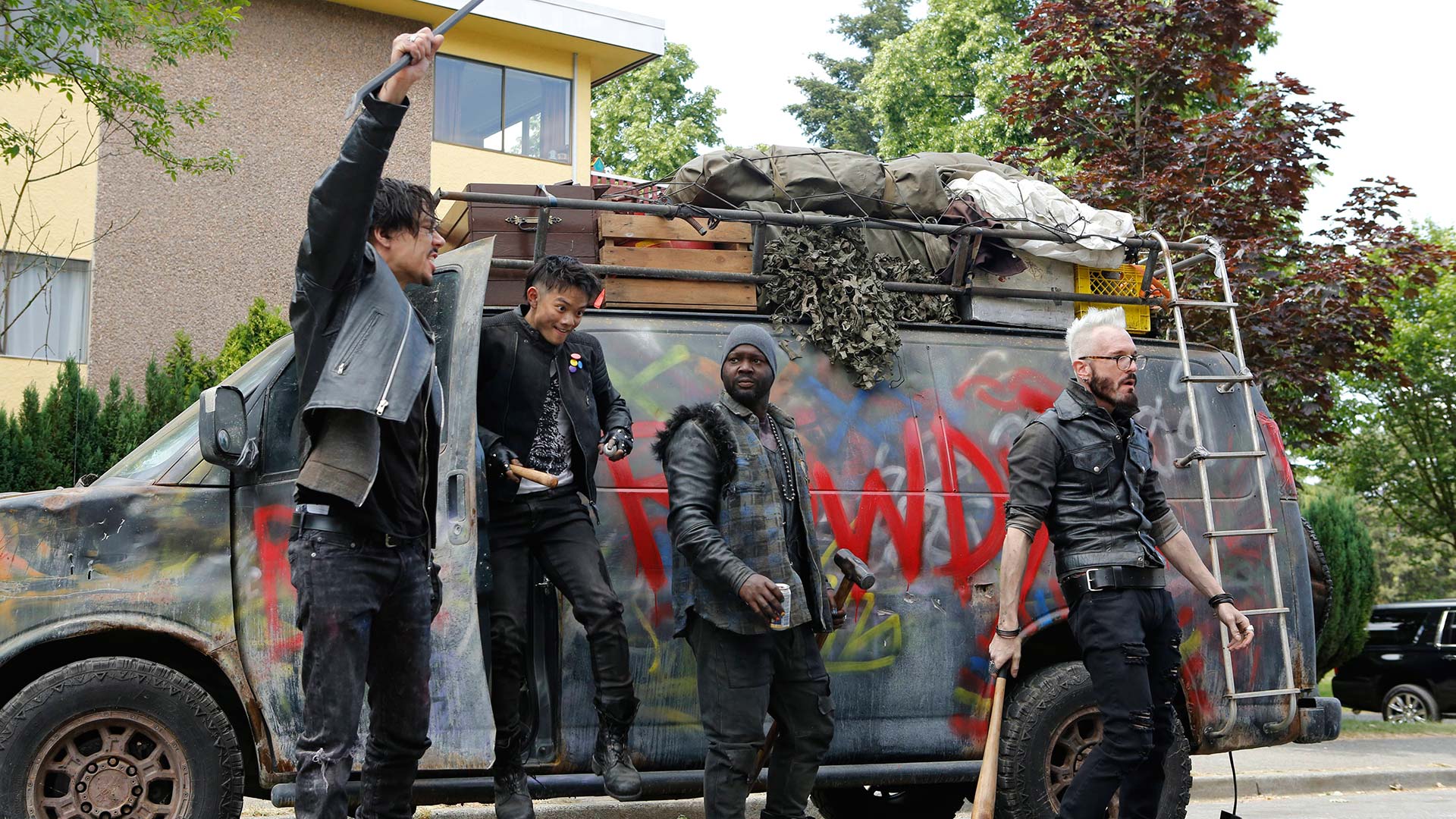 2. Monica R. via Facebook: How did you create the distinct sound of the Rowdy 3?

Great question and we’re stoked you noticed it, because this was a huge thing for the show from a very early stage. We played with a lot of ways to go about this — from licensed/source music, to original score, to sound design... We ended up creating a small library of original songs specifically for this group of characters. There was a general world of sort of '80s video game music we were listening to, trying to reimagine or reinterpret it with a contemporary twist — electronic music that felt a little bit animated and playful but also had some menace in the DNA. We are not musicians. We worked with a great group of composers at BMG (a music publishing and library company), so nearly all the credit goes to them. They really took our notes and ideas and created an incredible soundtrack and brought the Rowdy 3 to life. It was an absolute blast to give these guys a sonic identity.

3. @coygoonersgirl via Twitter: Since #EverythingIsConnected should we be listening for musical clues as well? Fantastic job

Thank you! Everything is indeed connected, and we put a lot of thought and effort into every single music cue. Whether its Crisotbal’s (our composer's) incredible score, which has certain themes and instruments for each specific character and their storyline, or the source music we’re choosing, the musical decisions absolutely support the story and foreshadow what is coming, and suggest how these characters and storylines intersect with one another. Certain characters will be listening to the same song in different scenes, other characters will be listening to songs from their past that hint at who they might be, etc. It’s fun tying everything together.

4.@Jaywani_: If you pick theme songs for each characters what would they be?

We made playlists for each character after we read the pilot script, so we sort of did this fun exercise where we created mixtapes for each character, trying to get inside of their heads in terms of what kind of music they liked and what they’d be listening to. In terms of personality, not necessarily their favorite songs (but something they’d still listen to), I’d say:

Dirk: “Here I Go Again” - White Snake; “This Must Be The Place” - Talking Heads

Todd – “Please Let Me Get What I Want” - The Smiths; “The Martyr” -Cursive

5. ‏@Strxngrthins via Twitter: also what music would each character listen to

With Dirk, we have a little bit of an idea what he listens to. He’s jamming, singing along to a K-pop song the first time he and Todd are in the car together. His taste is eclectic, and he’s not pretentious about what he listens to. He’s probably listening to things that find him in peculiar ways: by way of other people, by way of the radio. He’s not really seeking out new music... but he’s very open to whatever the universe plays him. He’s into some older Brit pop by nature: prefers Oasis over Blur, Super Furry Animals, The Verve... but was also drawn to southern California. And finds refuge in some Southern California pop in the vein of Sparks. Something tells me he’s also a very big Squeeze fan.

Todd is probably a little bit more of our uppity, holier-than-though, crate-digging record nerd. But he and Amanda certainly have overlapping tastes, and we think Amanda was introduced to a lot of the music she listens to through Todd, as her older, influential brother. They’re very close, and later on we’ll see them out at shows together (when they were younger). Todd and Amanda would certainly have an affinity for The White Stripes for obvious reasons. But we like to imagine he grew up immersed in the burgeoning Seattle grunge scene, keen on Nirvana, Mudhoney, Soundgarden... and fell in love with older groups like The Replacements and Hüsker Dü. Since then, his tastes have evolved and skewed garage rock: Ty Segall, Twin Peaks, The Oh Sees.

Amanda loves punk. Her attitude, her aesthetic, her style of drumming... she’s rebellious. She’s faced a lot of adversity in her life and kind of confronted it with a “f--- you,” me vs. the world mentality. She’s a loner. Modern bands she’s probably into are bands like Bully, Bleached, Dilly Dally, Sleigh Bells, Honeyblood, Pussy Riot, Sleater-Kinney, Ex Hex, La Luz, Chastity Belt, and Colleen Green.

6. @Strxngrthins via Twitter:how do they chose music for certain scenes

A lot goes into the music selection process, and a lot of songs are pitched — it is a very collaborative effort. We usually have a spotting session with the director, producers, and showrunner, where we sit and watch the episode together and discuss all the scenes that need music. When we land on a scene, we get into a discussion of whether it’s going to be source (music we find and license) or score (something original that our composer will create), and from there we delve deeper into a range of variables: Is this something the character is listening to within the show (diegetic music)? Is it a montage? What are the characters feeling? What are we trying to say with the music? You never want anything to be too on the nose, but also don’t want it to be too subtle or esoteric. Everything is about finding that perfect balance that supports the scene in the best way possible.

You can listen to Rob and Joe's weekly episodic playlists HERE.