WATCH: Colin Firth, Other British Oscar Hopefuls Have Their Say 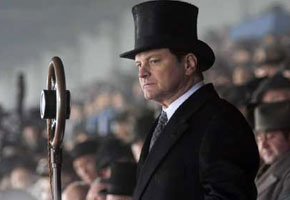 Colin Firth in ‘The King’s Speech’

The British presence at this year’s Academy Awards is formidable. According to the UK Film Council, British talent has secured 33 nominations — and Britain is represented in 18 of the 24 Oscar categories.

Leading the British charge is Colin Firth for his portrayal of George VI in The King’s Speech. Everyone thinks he will win the best actor trophy. Indeed it would be shocking news if he didn’t.

This low-budget British period drama has been a major success, it’s scored 12 nominations, more than any other film, and it’s already taken in excess of $230 million worldwide.

When I met Colin Firth, prior to the film becoming such a huge phenomenon, he explained how he — and the cast — once thought the project could have gone horribly wrong.

Helena Bonham Carter has also been nominated: she’s up for best supporting actress for playing the late Queen Mother. The actress faces formidable competition at the Oscars with most oddsmakers predicting that Melissa Leo, the matriarch in the boxing drama The Fighter, will prevail.

Bonham Carter explained to me how screenwriter David Seidler had been informed by the Queen Mother never to tell the story of The King’s Speech during her lifetime.

One Brit very likely to emerge victorious on Sunday night is Christian Bale for his supporting role as a boxer-turned-crack-addict in The Fighter.  Bale told me he did a lot of preparation for the role by spending time with Dicky Eklund, the real-life character he portrays, in his hometown of Lowell, Massachusetts.

Other Brits up for Oscars include filmmaker Mike Leigh, who’s been nominated for best original screenplay for his film Another Year. Leigh has been nominated before for four of his other films but has never won. He probably isn’t going to win this time around either – the best original screenplay prize is expected to go to The King’s Speech‘s David Seidler, or possibly to British director Christopher Nolan for his script for Inception.

Leigh, who’s a master of British social realist drama, couldn’t be more non-Hollywood. When I spoke to him he told me that winning an Oscar would be a good “wheeze.”

The best documentary category could yield a British winner. Not only is Banksy nominated for Exit Through The Gift Shop but so is British photojournalist Tim Hetherington for co-directing Restrepo. His film is a chronicle of what happens to a small platoon of U.S. soldiers in a remote and deadly outpost in Afghanistan. He thinks Oscars recognition would help raise the film’s profile and make it easier for him to get funding for a future documentary.

Also up for a best documentary Oscar is Britain’s Lucy Walker for her film Waste Land. It’s set in the world’s biggest rubbish dump in Brazil. The documentary shows how the lives of people who sift through the garbage to eke out an existence are transformed by art made out of the recyclable materials they collect. Basically, it’s a story about the inspirational power of art.  Lucy Walker is honored to have been nominated.

Tom Brook‘s reports on cinema can be seen every Tuesday and Thursday morning on BBC America.

WATCH: Christian Bale and Matt Damon in Trailer for Sports Car Biopic ‘Ford v. Ferrari’
10 Actors Who Keep Us on Our Toes with Their Chameleon-Like Transformations

10 Sets of Actors Who Have Coupled-Up On-Screen More Than Once
10 British Things About Your U.S. City
How to Pronounce the Longest Place Name in the U.K.
WATCH: How to Use Cockney Rhyming Slang

GRAHAM NORTON WELCOMES GUESTS BACK INTO HIS STUDIO

AN HONEST INSIGHT INTO LIVING WITH DISABILITIES

'CripTales' and The Visibility Collection

'DOCTOR WHO' AS YOU'VE NEVER SEEN IT BEFORE

'Doctor Who: The Faceless Ones'