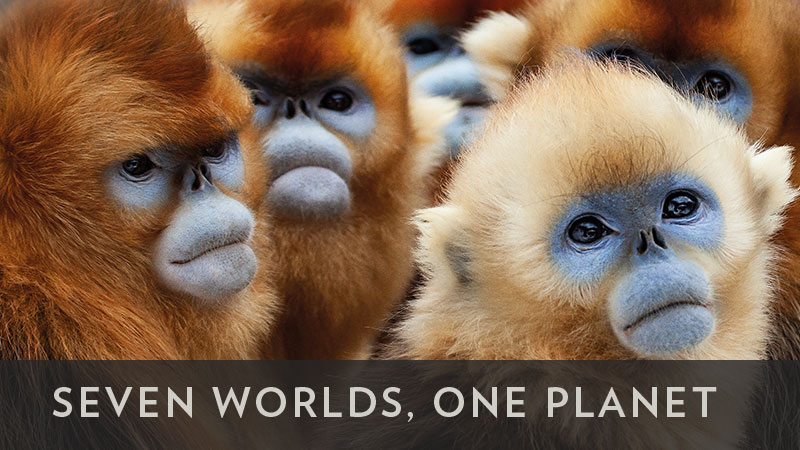 About the Show
Seven Worlds, One Planet tells the story of our seven spectacular continents and how they shape the extraordinary animal behavior we see today.
North America: A continent of change. In winter, lynx prowl the Yukon for snowshoe hares and manatees seek hot springs to escape the freeze. In summer, Tennessee fish build spectacular underwater pyramids, fireflies light up the forest nights, and polar bears leap from rocks as they hunt beluga whales.
South America: The most species rich continent on Earth. In the Andes, pumas hunt guanaco whilst rarely seen bears search for mini avocados. In the Amazon, poison dart frogs care for their babies, colorful macaws eat clay and birds make death-defying flights through a gigantic waterfall.
Asia: The largest of all continents. In the frozen north, walrus congregate in extraordinary numbers, bears gather inside volcanoes and yeti-like monkeys fight in the remote forests of China. In the tropical south, the last few Sumatran rhino roam and the world’s most bizarre snake lurks in Iran.
Australia: A land cast adrift at the time of the dinosaurs. Here, kangaroos and wombats brave snowstorms and gum tree forests are filled with never-before-seen predators.
Europe: Where wildlife survives alongside people. In Gibraltar, a baby monkey is kidnapped, whilst in the cemeteries of Vienna grave robbing wild hamsters fight. In this fairy tale continent wolves roam the forests, dragons lurk in caves and baby bears wander the woods.
Antarctica: The coldest, windiest, most hostile continent. Penguin chicks run the gauntlet of orca and leopard seals, colorful starfish and gigantic worms carpet the seabed, whilst on the surface you can witness one of the world’s greatest feeding spectacles.
Africa: Home to the greatest wildlife show on Earth where chimps make tools, cheetah hunt prey twice their size and, in crystal clear freshwater lakes, devious imposters trick caring fish mothers.