Episode 8: What You Didn’t Know About ‘Ruthless in Purpose, and Insidious in Method’ 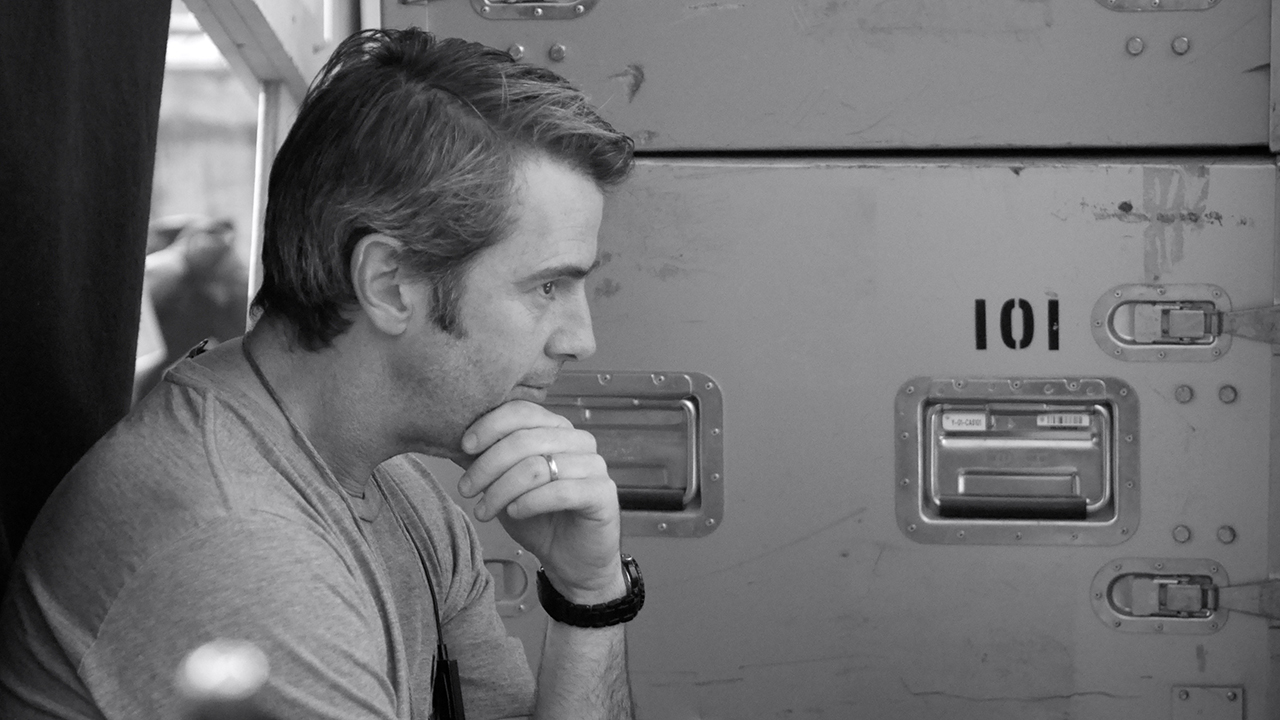 DIRECTOR
This episode was directed by a first-time director and someone very special to the Orphan Black family: director of photography Aaron Morton. Aaron is from New Zealand and moved his way up through the camera department on Xena: Warrior Princess where he met co-creator, exec producer, and director John Fawcett. John brought him onto Orphan Black in Season 1, and he is responsible for establishing the unique look of the show. After two seasons of amazing DP work, the producing team thought it was time to give him the opportunity to direct, and he hit it out of the park!

SPAS AND SALONS
The nail salon is Her Majesty’s Pleasure on Queen Street West in Toronto. We did not have to do a lot of set decoration because the salon and spa is so beautiful as it is.

Fun Fact: Our director, Aaron Morton, had no knowledge about manicures or pedicures. So while we were in prep we sent him there for his first man-mani ever! 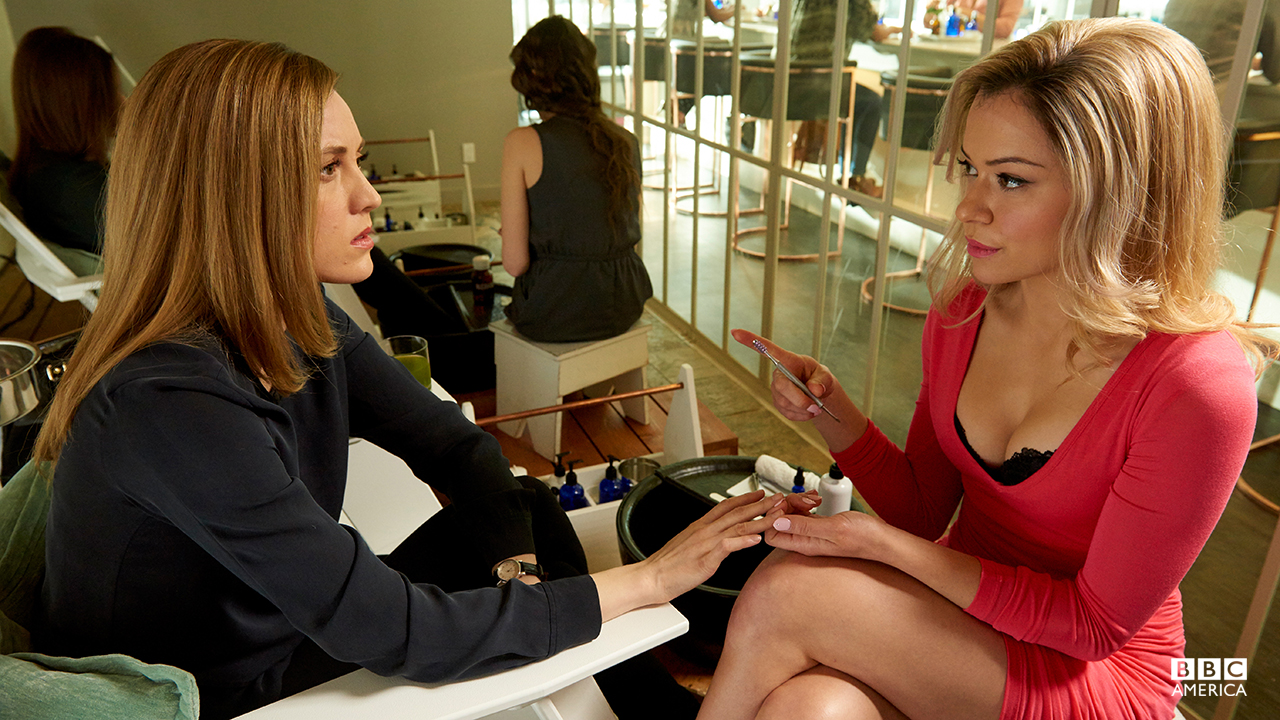 KRYSTAL, KRYSTAL, KRYSTAL
Krystal was born out of Tatiana playing around in the hair and makeup trailer, making everyone laugh with different voices and characters. She was always a blonde when we imagined her and as soon as we knew that Castor needed to go after a clone in the pilot episode, we thought she’d be the perfect target for them—someone they would pick up at a club.

SCOTT’S GEEKY MAN-DEN
Scott’s apartment was a set we wanted to build from the beginning of Season 3: a geeky man-den full of science fiction, action figures, and board games. The geeky props came through all of the merchandise companies that are now making Orphan Black brand products. They were all really excited to be able to share their other products on the show and we really couldn’t have pulled it off without their help. Funko Pop Dolls and IDW publishing were two of the major contributors. They sent dolls, figures, board games, books, comics, posters, and more!

Fun Fact: John Fawcett came to set during blocking of the scene between Rudy and Scott and rearranged the board games so that his favorites were seen in the master shot.

The cat belonged to an animal wrangler. John Fawcett wanted to find the biggest cat we could, so that’s how that specific cat was chosen.

Fun Fact: the name Denise came from the episode’s co-writer Chris Roberts. We wanted to find a name that would lead viewers to think Scott was saying hello to a girlfriend at first, and reveal it as his cat when we discover Rudy is waiting for him. Other names that were up for consideration: Muffin and Mittens.

BOARD GAME GEEKS
By now we all know that John Fawcett is a huge board game geek (see Season 2 and Runewars), so it was a no-brainer this year that we wanted to bring back Scott’s gaming group. We had the same actors and board game experts back from Season 2, including John’s friend Julian, who acts as our games expert on set, teaching the rules and setting up the games.

Fun Fact: This year we added a new member to the gaming group: Hell Wizard, the DYAD security guard who helps Rachel and Scott escape. The actor who plays that role is associate producer Mackenzie Donaldson’s boyfriend, which was funny because her mother was a guest star in the previous episode! Keepin’ it in the family! 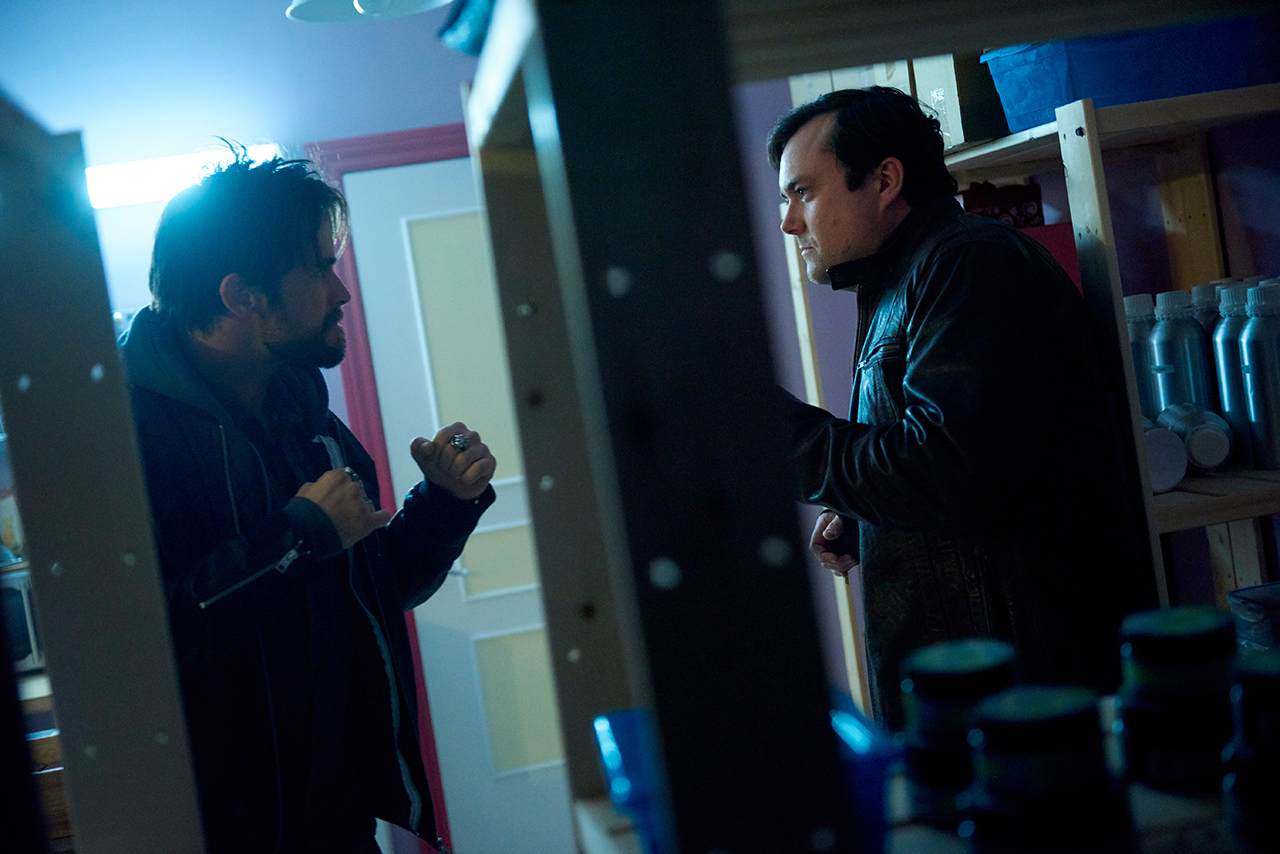 JAGE (JASON) VS. DONNIE
Whenever Kristian Bruun is on set it is a fun time. So you can only imagine how hilarious this scene was to watch from blocking to last take. They blocked it out relentlessly with our stunt coordinator Randy Butcher. And apparently both actors wanted the scene to be as authentic as possible, so they did their own stunts. Randy Butcher choreographed a great fight that the actors could do themselves.

Fun Fact: Chris was especially impressed with how both actors protected their characters within all of the action. Quite a feat!

DELPHINE’S DYAD OFFICE
Delphine’s office is actually a brand-new set this year. It looks similar to Leekie/Rachel’s set from Season 2 but is actually a new structure, slightly smaller in size and with completely new décor.

Fun Fact: When constructing this set, we imagined that this office is on a different floor from Leekie’s, and it was used by Nealon in the beginning of the season, before Delphine returns with more power.