Episode 3: What You Didn’t Know About ‘Formalized, Complex, and Costly’

ELECTION TIME!
The Marci Coates school trustee storyline is inspired by one of Graeme Manson’s best friends who ran for school trustee here in Toronto. He actually came into our production offices and gave the writers and our art department an inside look at what it is like running for that position.

BATHTUB FUN
It is hard for us to pinpoint exactly how much fake blood was used in the dead-Seth bathtub scenes, because some of it came from makeup, some of it was VFX, some of it was wardrobe, and some of it was props. But we can tell you that it was one of those times when the on-set props, Steve, and Craig were all caked in fake blood by the end of the day. They told us that their pants could stand up by themselves when they got home that night. The crew went through dozens of gloves doing resets on the blood. And there was a ton of laughter between takes and definitely some blooper reel moments!

Extra Fun fact: the fake head somehow got left behind and it was in the tub for weeks after we were done shooting. Every time crewmembers would go into the loft to relax in between set-ups, we would joke about how it was still there.

THE BRAIN
Seth’s brain was made by our makeup FX designer Paul Jones. It was made of silicon and then dressed with lots and lots of synthetic blood (yes, even more blood). There was talk of using a cow brain because they look similar to human brains, but we didn’t think that was the most ethical way to go, so we built one!

HONEYMOONERS ON THE RUN
The interior of the motel was built in our studios so that we could go back there for multiple episodes and control many factors within the set. The exterior of the motel is the Lido Motel in Toronto. We tend to have to scout lots of different motels every season—it’s almost a running joke—and this one had the country feel to it which was perfect for our Prolethean Honeymooers on the run. 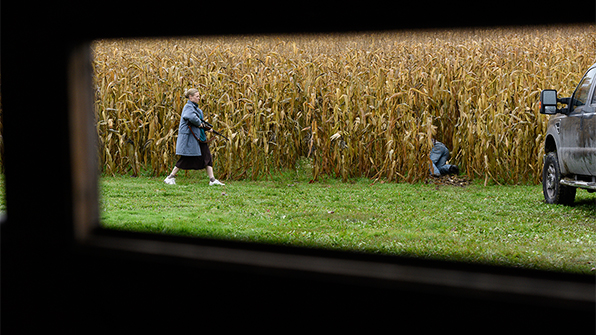 CREEPY CORNFIELDS
Willard’s farm and the creepy cornfields are located just North of the Metro Toronto Zoo. The director and showruners were very committed to using the cornfields in Willard’s world. Research and coordination was done with the farmer to make sure that a) the corn was not cut down and harvested before we shot the scenes and b) that we were filming at the exact time of year for maximum height and maximum creepiness.

WILLARD
Nicholas Campbell, the actor who plays Willard, is a very well-known Canadian actor. It was pretty easy to disguise him (he doesn’t usually look so rugged) because he came with that huge beard! He had been growing it for other projects—and for his own pleasure—so when we saw a picture of him with it we knew he was our Willard. It is always hard to have to say goodbye to a great actor after only one episode, but for his performance as Willard it was worth it.

CLONE DOUBLE/ALEXIS
We love Kathryn Alexandre and giving her a role on the show was always a priority. Luckily, last year we created Alexis, the Prolethean midwife, and knew it was time to cast Kathryn in the show. This year it was fun to give her a little bit more to do, so she became a dish pig until she is able to win back the trust of Bonnie and the Prolethean pack. It is really nice to get to see Kathryn and Tatiana on screen together, but not as clones!

CREEPY PROLETHEAN FARMHOUSE NO. 2
Surprisingly, the new Prolethean Farmhouse is part of the Black Creek Pioneer Village, a location that is very popular to use and located just outside Toronto. The historic Schmidt-Dalziel Farm—built by an American settler back in 1809, and the oldest barn of its type that still stands in all of Canada—sits on a hidden piece of land set apart from the village and not open to the public. It is really creepy and beautiful; the distressed look to the walls, which is usually faked in film and TV, is actually real!

WE LOVE OUR DINERS
The diner Sarah and Gracie meet in is a real place! Very real. It’s called Ted’s Amazing Restaurant and on our tech scout we all ate burgers and grilled cheeses there. It is a funny little diner, and we can all say that their food is exactly what you’d expect: greasy and delicious.

COMPOSER OR EXTRA?
Does the piano player at the Prolethean’s farm look familiar at all? Probably not, but you know his music! That is Trevor Yuille, Orphan Black‘s very own composer. He was tasked with coming in and playing our piano-playing extra so that he could lead the singers. It was a great cameo!